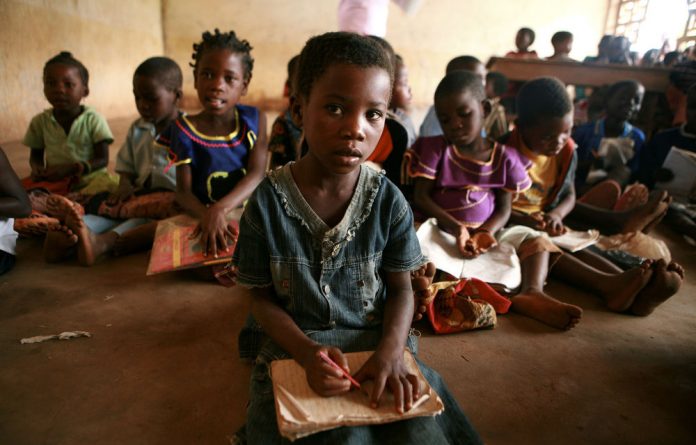 The war in Mozambique may have ended 18 years ago, but its legacy lives on in the classrooms of rural schools in Zambezia province.

This area makes headlines when the Zambezi River floods, but it is also the province that suffered most during the 16-year-long civil war because of the rebel strategy of targeting and destroying hospitals, schools and roads.

It is not unusual to have 100 children in a class, taught by teachers who have not finished high school themselves, in schools with no toilets or running water.

Exhausted teachers often run classes in three shifts, the first starting at 6.30am, and many schools lack reading material other than the children’s work books.

Mozambique has made huge strides in improving access to basic education since the war ended, but it is an uphill battle. But, for parents and teachers in rural towns and villages, this is a battle they are determined to win.

Each school has a school council elected by community members and dedicated to ensuring their children receive a decent education.

Apathy is not an option here. “This school was built by the community — they collected stones and made bricks to build the walls and then lobbied government for the timber and iron sheets for the roof,” said Pedro Namagila, director of the Errego Primary School in Ile.

Ensuring children stay in school is also a major concern, with about 60% dropping out before completing grade five. For families struggling to grow enough food, a child in school is a pair of hands lost in the fields.

The HIV epidemic also means that large numbers of children — mostly girls — drop out of school to work or care for sick relatives and younger siblings.

“If a child drops out, we go and ask the family why,” said Ferraz Lugeira, school council chairperson. “If they say it is because they don’t have books or stationery, we use money from a fund for orphaned and vulnerable children.”

The Namaripe Primary School near Gurue, located against a backdrop of spectacular mountains and tea plantations, can be reached only by a road that even 4x4s have difficulty negotiating.

The children walk long distances to school and often there is not enough space for them once they get there. The province has a ratio of 91 pupils to each teacher and, because of the vast distances and condition of the roads, it is difficult for the education department to deliver schoolbooks or do inspections.

Americo Vaela, chairperson of the Namaripe school council, is determined that no child will be turned away. “Lots of children don’t come to school because we don’t have enough classrooms. So we build classrooms with thatch walls and roofs until we can make the bricks we need,” he said.

Another school council member, Padania Henriques, said that as the school was confronted by ever-growing learner numbers, “the school council will get together and figure out how many bricks each family should make”.

“We ask people with building skills to lend us their expertise and others help us with the physical labour of building.”

Other council members ensure that children orphaned by Aids can still come to school.

“They’re taken in by relatives, but they have their own children and it puts a lot of strain on them,” said Manuele Mutocorowa.

“We try to help by making sure the orphans have books and stationery.”

The community’s dream is to have a hostel at the school to house orphaned children during the school term.

Run by community members who are themselves impoverished, school councils can do only so much. And ironically, this self-help spirit can bolster the status quo, as it is often easier for communities to do it themselves than to lobby government officials for action.

Tough times in Zambezia
Zambezia, Mozambique’s second-largest and most populated province, ranks the lowest on the country’s scale of human development, with 70% of its inhabitants living below the poverty line and surviving on subsistence farming and fishing. Some 43% of its people are under 15 years of age.

Because of Mozambique’s protracted civil war, the national poverty rate increased from 15% in 1980 to a crippling 60% in 1995.

Research shows that each extra year spent by women in primary school will reduce their children’s risk of premature death by 8%.

In 1995 Mozambique became a member of the British Commonwealth, the first nation to do so that had not formerly been a British colony.