Tension simmers as Terre’Blanche is laid to rest 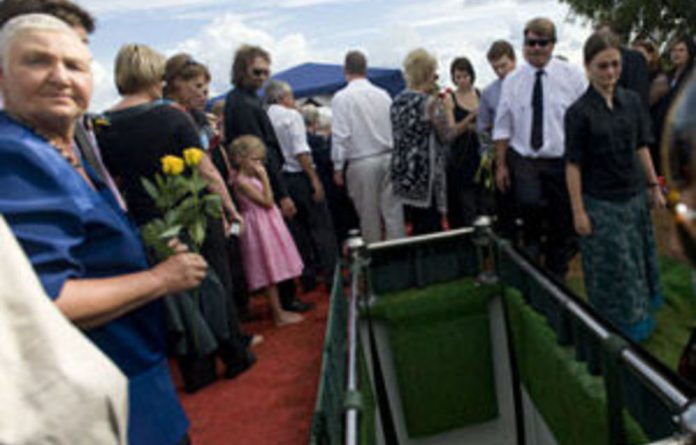 After a violent life and violent death, Eugene Terre’Blanche was laid to rest in peace on Friday as family members threw petals on his coffin. But there was every sign that the white South African’s extremist views have not been buried with him.

At a funeral service Terre’Blanche’s coffin was defiantly draped in the flag of his far right Afrikaner Weerstandsbeweging (AWB) movement, the swastika-style insignia and blood red surround reminiscent of the Nazis.

Just before noon the coffin was borne into church by burly but pot-bellied men in green berets and brown shirts with “Boerkcommandos” epaulettes. The congregation burst into a passionate rendition of the apartheid era national anthem, Die Stem and some gave Nazi-style salutes.

The casket, topped with a red and white floral wreath, was placed beneath the pulpit alongside a framed photograph of Terre’Blanche, a man who once threatened to wage war rather than allow black rule, riding his beloved horse like a Boer Napoleon.

Then came an angry but sombre two-hour service in a packed church, deep in farming country, where black mourners could have been counted on one hand. As the pious congregation raised their arms and sang hymns in Afrikaans, it was easy to believe that this was a sepia-tinted bubble in which democracy and Nelson Mandela never happened.

This community’s long simmering resentments have been focused by the bloody killing of Terre’Blanche in his bed last Saturday. He was found beaten so badly that his face was unrecognisable, and his trousers had been pulled down to expose his genitals. Two black farm workers have been charged with murder.

Terre’Blanche was the talisman of hardline opposition to the end of racial apartheid in the early Nineties. But he had been in relative obscurity since his release in 2004 after a prison sentence for beating a black man nearly to death.

Several police and army units had been deployed in Ventersdorp, North West province, to ensure there was no repeat of the scuffles between black and white protesters outside court three days earlier. Officers could be seen patrolling in body armour and helicopters flew overhead.

‘He was a great leader’
Mourners rose before dawn and travelled from all over South Africa. There were camouflage-clad men carrying pistols and little girls in their Sunday best. There were men on motorbikes in Hell’s Angels-style black leather jackets. There were also many cars and bakkies flying the pre-1994 national flag.

Jan Bosch (52) from Vanderbijlpark, had left home at 5am. “I’ve been close to Eugene and in his heart many times,” he said. “In his heart he was a good person. He was a great leader of our people.”

But this was a tale of two nations. The aggressive pilgrimage was watched with curiosity and consternation by black people living in roadside shacks and working in shops and at petrol stations.

“They must take their flags and go and wash their faces with them,” said Selow Tshukamane (43) a teacher, leaning against the window of a convenience store. “There’s still a lot of tension here. Terre’Blanche treated us as dogs so we can’t feel for him.”

Some public insults were traded, with white people shouting the highly offensive term “kaffirs”. Some mourners, dressed in combat fatigues, muttered “housemaid” in Afrikaans when a black politician paying official respects walked past.

About 700 people gathered inside the Afrikaner Protestant Church, which was soon standing room only, with thousands more outside listening via loudspeakers. A banner had been hung on a tree opposite the building. “Murdered by SA government? Afrikaner genocide”, it said.

The congregation, including Terre’Blanche’s family and AWB members, listened to Bible stories delivered by the Reverend Ferdie Devenir in Afrikaans. “He was a good person, the world was against him, they looked for the bad things about him,” he said of Terre’Blanche. Behind him was a large cross in the somewhat utilitarian building of white ceiling tiles, bare beige brick walls and two stained glass windows.

The coffin, bathed in soft light, was overseen by a man in dark sunglasses, beard, khaki uniform and short sleeves. A respectful silence was interrupted by the wails of a baby and the ring of a cellphone.

The Last Post was played on a traditional Kudu horn. But the assembly erupted in cheers and applause evocative of a political rally when addressed by Afrikaner singer Steve Hofmeyr.

‘Silence is complicity’
Hofmeyr added: “It is not enough to ask of us to remain patient for the sake of transformation and a soccer tournament,” referring to the World Cup being hosted by South Africa in June.

He condemned the government’s failure to act, adding: “Silence is complicity. Our government’s paralysis here will afford us many sad days like this, black and white.”

The AWB has given conflicting signals over its desire for revenge for Terre’Blanche’s murder. After the service an AWB member, who did not wish to be named, said: “We’re quite calm. We’re not up to anything drastic. Not yet. You never know.” Wearing a badge with the apartheid era flag, Jan Jacobs (72) from Bloemfontein, said: “No one came with any weapons. We left them at home to be peaceful. We’re not mighty enough to take on the blacks. God will do it for us.”

“Eugene Terre’Blanche was a sober man and a fighter for his share of the land. That’s what I’m fighting for. Anarchy developing in this black nation causes us to worry. I’ve got the bible: it says 2010 will be the last year.”

Asked about the African National Congress youth leader Julius Malema, who has been accused of inciting violence by singing “shoot the boer”, Jacobs added: “I reckon he’s going to be taken out very soon. It won’t be a Boer. It will be his own people. I reckon that’s what we need in this country.

He added: “God separated us. We can’t have a mix. The ‘rainbow nation’ could never be possible.”

The guests included provincial premier Maureen Modiselle and Pieter Mulder, deputy agriculture minister and leader of the Freedom Front Plus party. He said: “I walked here because of traffic and got the feeling of the people – anger, frustration, a sense that something needs to be done.

‘People haven’t forgiven and forgotten’
“In a country where 3 000 people are being murdered on farms since 1994 it is a crisis. Today the dam wall burst. People here want the threat issue dealt with.”

But on a nearby street corner, black people said they too felt under threat. Thabo Ntai (23) a local journalist, said: “There is a lot of tension from these guys. You find people pushing you around. The apartheid flags show that people haven’t forgiven and forgotten: they want to get back to the past.

“This town is dominated by white Afrikaners. The black people here are scared. In the next two months it won’t settle down. Anything could happen.”

After the funeral, as heavy rain began to fall, a motorcade led by a white hearse and police outriders wound its way to Terre’Blanche’s farm, where he was buried within sight of the largely disused farmhouse where he was killed. Family members wept and embraced during the 20-minute ceremony.

Mourners on motorcycles, in cars and trucks, some of them flying the group’s flag, followed the hearse carrying the coffin. A long queue snaked along the road long into the afternoon.

As a gesture of reconciliation, dignitaries from the local black community were invited to attend the funeral service, but few took up the offer. One black face was prominent, however. Isaac Medupe, a lay preacher for the Seventh Day Adventist Church, had special reason to remember Eugene Terre’Blanche.

“That is my friend,” said Medupe, smart in a pinstripe suit. “I knew him from the time he was in prison and I was the chaplain. I was carrying out the rehabilitation. He accepted it and became a changed man. I don’t say he was an angel, but he definitely became a better person.” – guardian.co.uk