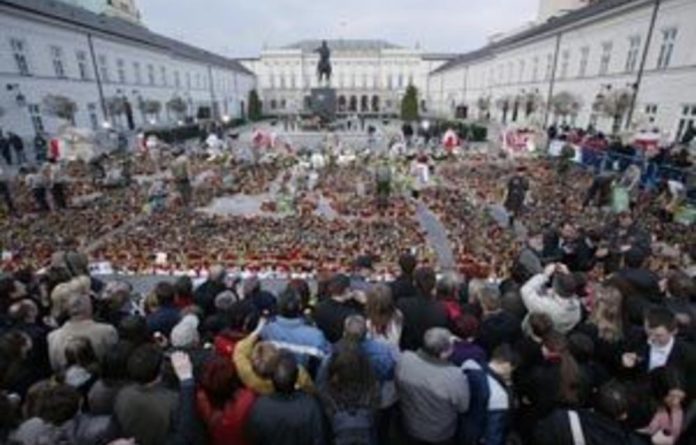 Poland has moved to fill key state posts after a weekend plane crash in Russia killed President Lech Kaczynski and dozens of other top officials, plunging the country into mourning.

Russian investigators found the body of Kaczynski’s wife Maria after the president’s coffin was returned home on Sunday to a Warsaw awash with flowers, candles and red-white national flags, but had identified the remains of only a quarter of the 96 victims of the crash.

Flying in an aged Russian Tupolev plane, Kaczynski and an entourage of military leaders, opposition figures and the central bank governor, went down in thick fog after hitting tree tops near Smolensk airport on Saturday.

Russia has said the pilot ignored advice from air traffic controllers not to land and some media have speculated Kaczynski himself may have ordered the landing in Smolensk, but Poland’s chief prosecutor said there was no evidence at the moment to support that conclusion.

The deaths are a huge blow to the political and military elite, but the crash poses no threat to stability in the country of 38 million people, which is firmly anchored in the European Union and the United States-led NATO alliance.

Although the president has power to veto laws in Poland, it is the government, led by Prime Minister Donald Tusk, which decides policy. Only three deputy ministers from the government were on the plane.

Financial markets broadly shrugged off the crash, with the Polish zloty little changed against the euro and stocks ending 1% higher.

“Despite the terrible loss for Poland, the impact on the main economic variables should remain limited especially given the stability of the Polish economy,” economists at Unicredit said in a research note.

Cockpit recorders decoded
Acting President Bronislaw Komorowski, a member of Tusk’s centrist Civic Platform (PO) who was favoured to beat the right-wing Kaczynski in an election planned for October, said on Monday he had filled important roles in the president’s chancellery, much of which was wiped out by the crash.

“The first task I am going to set for the new National Security Bureau (BBN) chief is a review of the rules for travel of top military officials,” he told reporters.

Kaczynski, a combative nationalist known for his distrust of both the European Union and Russia, had been travelling to mark the 70th anniversary of the massacre of Polish officers by the Soviet NKVD secret police in the nearby Katyn forest.

Speculation that he might have ordered the landing appeared to stem from an incident in 2008, when Georgia fought a brief war with Russia. Kaczynski flew to Georgia at the time to show his solidarity and reportedly grew irate when his pilot refused to land in the capital Tbilisi due to safety concerns.

Russian Deputy Prime Minister Sergei Ivanov said both cockpit voice recorders had been retreived from the wreckage and were being decoded.

“It has been confirmed that the crew in a timely manner received a warning about adverse weather conditions and a recommendation to land at another airport,” Ivanov said.

Komorowski said he would not rush a decision on who should replace Slawomir Skrzypek, the governor of the central bank.

But the bank’s Monetary Policy Council met on Monday and agreed that Skrzypek’s deputy Piotr Wiesiolek, who has taken over day-to-day operations, would chair sessions of the rate-setting body until a new governor was chosen.

The central bank has not changed interest rates since June of last year but it intervened in the foreign exchange markets on the day before the crash, selling zlotys for euros in order to push down the value of the Polish currency — its first such move since a free float was introduced a decade ago.

The Polish economy was the only one in the 27-nation EU which did not contract in 2009 and the zloty had risen to 16-month highs versus the euro before the intervention.

Elections moved forward
On Tuesday, a special joint session of the Polish parliament will be held and Komorowski is expected to begin talks with the country’s political parties on setting a date for the presidential vote.

“I want to ask the opposition factions for their preferred election date,” Komorowski told Polish television. “If that doesn’t yield a result, I’ll be inclined to call the elections for the latest possible time. The last date that is technically possible is July 4.”

Russia’s health minister Tatyana Golikova said a total of 24 bodies from the crash had been identified so far. On a visit to Moscow, her Polish counterpart Ewa Kopacz expressed gratitude to the Russian authorities for their professionalism and collaborative approach.

Russian President Dmitry Medvedev laid flowers at a candle-lit memorial to Kaczynski at the Polish embassy in Moscow on Monday and signed a book of condolences.

Kaczynski’s coffin, greeted in silence by tens of thousands of people lining its route from Warsaw’s military airport to the presidential palace on Sunday, will be available for public viewing from Tuesday. A funeral date has not been set.

“We have to ask ourselves why this happened. It’s not about arguing or placing blame on anyone, but we have to draw conclusions, lessons for the future,” Lech Walesa, Poland’s former president and onetime leader of the Solidarity movement that overthrew communism in 1989, told Polish TV.

Kaczynski belonged to Solidarity in the 1980s but later quarrelled with Walesa. He and his identical twin brother Jaroslaw, a former prime minister, have led opposition to some of Tusk’s market reforms and his drive to take Poland into the euro as soon as possible. — Reuters