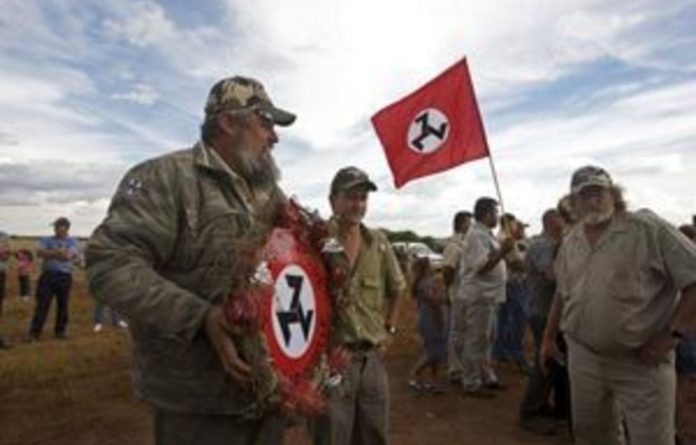 “The meeting was requested by the AWB,” said Mthethwa’s spokesperson Zweli Mnisi.

He said the rightwing organisation — whose leader, Eugene Terre’Blanche was hacked to death on his farm two weeks ago — wanted to discuss “some killings”.

“We will be sharing our rural safety programme with them,” said Mnisi.

The minister, the secretary of police, Jenny Irish-Qhobosheane, and Mnisi would sit in on the meeting with the AWB.

AWB general secretary Andre Visagie as well as the organisation’s new leader Steyn van Ronger are expected to attend the meeting in Pretoria alongside other AWB members.

Terre’Blanche was murdered on his farm outside Ventersdorp two weeks ago. A 15-year-old youth and Chris Mahlangu (28) were arrested for the murder, which locals feared would spark racial violence in the conservative North West town.

Spokesperson for police National Commissioner General Bheki Cele said on Sunday that semen had been found on the body of Terre’Blanche.

“His body was found half naked with semen on his private part. That is not new information, it has always been part of the evidence,” said Nonkululeko Mbatha.

Cele told a Sunday newspaper that the “sex issue” had always been there because Terre’Blanche’s body had been found with his pants down and “were wet with semen”.

However, Cele said there was no condom found on the scene, [as reported in the media last week].

There were sex rumours in the right-wing leader’s murder case that the defence decided to abandon in the Ventersdorp Magistrate’s Court on Wednesday.

In a more recent incident, a 50-year-old man from a farm outside Ventersdorp is in hospital after being attacked on Sunday. He sustained multiple stab wounds to the leg after being attacked when he went outside to check why his dogs were barking, paramedics said. — Sapa