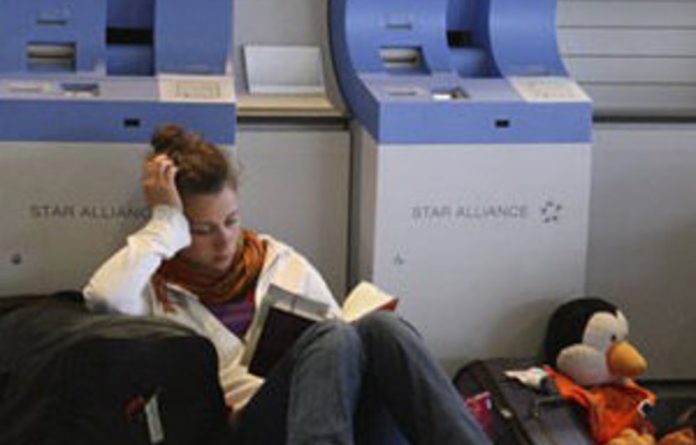 Officials hope to significantly increase flights at the start of Europe’s new working week on Monday and the EU summoned ministers for talks as pressure builds for a solution to the five-day-old air travel crisis.

From just over a fifth of flights taking to the air on Sunday, the figure could rise to up to a half on Monday, said the officials.

The closure of most of Europe’s airspace because of a huge cloud of ash from an Icelandic volcano has cost the airline industry hundreds of millions of dollars, millions of passengers have been stranded, and importers and exporters have been hit.

The crisis has had a knock on effect across the world and its impact on everyday life in Europe has deepened. In Britain, companies reported staff had been unable to get back from Easter holidays abroad and hospitals said they were cancelling some operations because surgeons were stuck in far off places.

A senior European Union official said the current situation was not sustainable, as airlines called for a review of no-fly decrees after conducting test flights at the weekend without any apparent problems from the ash cloud.

“We cannot wait until the ash flows just disappear,” said Transport Commissioner Siim Kallas, adding that he hoped 50% of European airspace would be risk-free on Monday.

Spain’s EU affairs minister Diego Lopez Garrido told reporters after a meeting at European aviation control agency Eurocontrol: “The forecast is that there will be half of flights possibly operating [on Monday].”

Italy and Austria said they would reopen affected airports on Monday.

Only 5 000 flights took place in European airspace on Sunday, compared with 24 000 normally, Eurocontrol said. It said 63 000 flights had been cancelled since Thursday.

EU transport ministers will discuss the crisis in a video conference on Monday that Spain has called in its capacity as the 27-nation bloc’s president.

“We can examine the results of the test flights and look and see whether there is any updating of the regulatory structure which might make it possible for flights to take place,” British Transport Minister Andrew Adonis told BBC television.

Dutch state broadcaster NOS quoted Transport Minister Camiel Eurlings as saying Europe’s response to the ash cloud had been too severe, and that the United States did not completely close its airspace in response to similar eruptions.

The Dutch airline KLM, which has flown several test flights, said most European airspace was safe despite the plume of ash, and dispatched two commercial freight flights to Asia on Sunday.

Volcanic ash is abrasive and can strip off aerodynamic surfaces and paralyse an aircraft engine. Aircraft electronics and windshields can also be damaged.

“One could say that the guidelines are interpreted slightly more rigorously in Europe than in the United States, when it comes to responsibilities of air traffic control agencies and pilots,” he told Reuters.

Iceland said tremors from the volcano had grown more intense but that the column of ash rising from it had eased back to 4 to 5km from as high as 11km when it began erupting on Wednesday from below the Eyjafjallajökull glacier.

Weather experts said wind patterns meant the ash plume was not likely to move far until later in the week.

The shutdown poses a growing problem for airlines, estimated to be losing $200-million a day, and for the millions of travellers stranded worldwide.

For some businesses dependent on fast air freight, the impact has been immediate.

Kenya’s flower exporters said they were already losing up to $2-million a day. Kenya accounts for about a third of flower imports into the European Union.

The air travel disruption is the worst since the September 11 attacks on New York and Washington in 2001, when US airspace was closed for three days.

Britain said it was considering using the navy and requisitioning merchant ships to ferry home citizens stranded abroad. The response to the crisis is threatening to become an issue in the campaign for Britain’s May 6 election.

The British travel agents’ association Abta said it had a rough estimate that about 150 000 Britons were stranded abroad.

“At no time in living memory has British airspace been shut down and affected this many people,” said an Abta spokesperson.

The crisis is having an impact on international diplomacy, with Pakistani Prime Minister Yusuf Raza Gilani becoming the latest leader to abandon a visit to Europe. He was supposed to begin a trip to Paris, Brussels and Madrid on Monday.

For travellers, businesses and financial markets, the biggest problem is the sheer unpredictability of the situation.

Economists say they stand by their predictions for European growth, hoping normal air travel can resume this week.

But if European airspace were closed for months, one economist estimated lost travel and tourism revenue alone could knock one to two percentage points off regional growth. European growth had been predicted at 1-1,5% for 2010.

“That would mean a lot of European countries wouldn’t get any growth this year,” said Chatham House senior economic fellow Vanessa Rossi. “But the problem is it is incredibly hard to predict what will happen. Even the geologists can’t tell us.”

Disruption spread to Asia, where dozens of Europe-bound flights were cancelled and hotels from Beijing to Singapore strained to accommodate stranded passengers. In Tokyo, Japan Airlines said it had cancelled 44 European flights so far and All Nippon Airways put its cancellations at 27.

Many US airline flights to and from Europe were cancelled.

On Sunday, Airports Company South Africa (Acsa) confirmed that dozens of flights to and from Europe had been cancelled.

“It is very difficult to know if airlines scheduled to fly will indeed be able to do so during this period of uncertainty,” Acsa said in a statement. – Reuters

After ousting a dictator, members of Sudan’s resistance committees are now helping to fight the Covid-19 pandemic
Read more
Africa

Despite containing Covid-19, it will be some time before normal life resumes — and some measures will be written into the law
Read more
Advertising
Continue to the category
Coronavirus