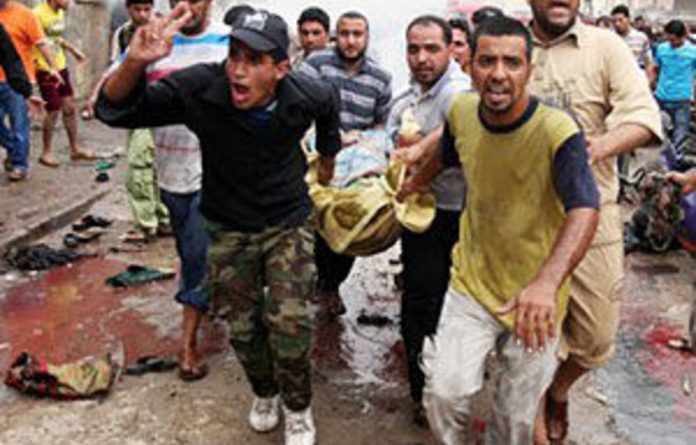 Bombs targeting Shi’ite areas killed at least 56 people in Baghdad on Friday in a possible backlash after Iraq touted a series of blows against al-Qaeda.

Eight people were also killed by bombs in the Sunni west of the country.

Seven blasts hit different areas of the Iraqi capital around the time of Muslim prayers, mostly near Shi’ite mosques and at a marketplace, an Interior Ministry source said. More than 110 people were wounded.

“We expect such terrorist acts to continue.”

Last Sunday, al-Qaeda’s leader in Iraq, Abu Ayyub al-Masri, and Abu Omar al-Baghdadi, the purported head of its affiliate, the Islamic State of Iraq, were killed in a raid in a rural area north-west of Baghdad by Iraqi and US forces.

In Friday’s attacks, at least 21 people were killed and more than that number were wounded when three bombs exploded in populated Sadr City slum. Another bomb killed at least 11 and wounded 17 near a Shi’ite mosque in al-Ameen district in south-eastern Baghdad. An earlier car bomb killed three people near a Shi’ite mosque in the north-western neighbourhood of al-Hurriya, police said.

Hours earlier, seven members of one family were killed in a series of blasts in Khalidiya, a town in Iraq’s turbulent western province of Anbar, 83km west of Baghdad. One police officer died trying to defuse a bomb.

The mainly Sunni province of Anbar has been relatively quiet since tribal leaders in 2006 started turning on Sunni Islamist groups such as al-Qaeda, who had once dominated it. But insurgents continue to operate in the vast desert province.

“At four in the morning, I heard a movement behind my house and found some barrels nearby, so I took my family out of the house,” said Fadhil Salih, a judge at the Khalidiya courthouse.

“An hour later the bomb went off and destroyed my house but, thank God, there were no casualties in my family,” Salih said.

At least 10 people were wounded in the blasts, including two policemen. Authorities imposed a ban on vehicles and motorbikes in Khalidiya after the blasts.

Al-Qaeda in Iraq under pressure
Iraqi officials say they have been expecting revenge attacks from Sunni Islamist insurgents after security forces scored a number of victories against al-Qaeda in the past month.

The strike against al-Qaeda’s Iraq leadership has been accompanied by a string of smaller battlefield victories in which more than 300 suspected al-Qaeda operatives have been arrested and 19 killed, according to US and Iraqi officials.

Overall violence in Iraq has fallen in the last two years as the sectarian bloodshed that followed the 2003 US-led invasion faded, but tensions were stoked last month after a national election that produced no clear winner.

But al-Maliki’s allies are attempting to capture the lead through a recount of votes in Baghdad and through court challenges to winning candidates because of their alleged ties to Saddam Hussein’s outlawed Ba’ath party. — Reuters

Kenya said it invaded Somalia to protect its citizens, but the attack in Nairobi this week shows this has failed
Read more
Advertising
Continue to the category
Africa