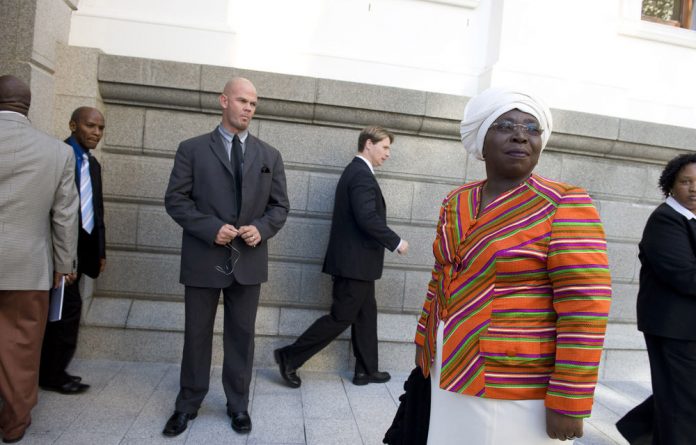 Two forensic reports, neither of which has been made public, may provide answers as to why the home affairs department controversially cancelled a multibillion-rand IT contract with Robert Gumede’s listed company, GijimaAst, last week.

The Mail & Guardian has established that an auditor general’s report on the awarding of the tender, commissioned by former home affairs minister Nosiviwe Mapisa-Nqakula and handed to her in February last year, was never tabled in Parliament.

According to a Business Times report in February last year, the auditor general uncovered irregularities in the awarding of the tender to GijimaAst. Gijima’s chairperson, Gumede, has strong connections with the ruling party.

Academic and mediator Harvey Wainer, tasked by Mapisa-Nqakula to conduct the second investigation, handed his initial report to the department after Nkosazana Dlamini-Zuma took over as home affairs minister last year.

However, at the beginning of the year, Dlamini-Zuma — apparently under pressure from her former director general, Mavuso Msimang — expanded Wainer’s mandate to include allegations of conflicts of interest in the awarding of the tender.

ANC MP Patrick Chauke, chairperson of Parliament’s home affairs committee until last year’s elections, has long demanded a probe into the relationship between Msimang, Gijima chief executive Jonas Bogoshi and the State Information Technology Agency (Sita), which recommended that Gijima be given the contract in 2006.

Both Msimang and Bogoshi are former senior Sita employees — Msimang resigned as chief executive in April 2007 and Bogoshi left his position as chief director at Sita in July 2007 to take the top job at GijimaAst.

A senior home affairs source said Msimang was “tired of the sword hanging over his head” and begged Dlamini-Zuma to have the allegations investigated. The source claims Msimang was upset when the auditor general failed to address the conflict-of-interest issue in his report.

Msimang, who retired a few weeks ago after his contract was not renewed by Dlamini-Zuma, declined to comment this week.

The M&G has established that neither the auditor general’s report nor Wainer’s first report has been presented to the home affairs committee. This is despite committee chair Ben Martins writing to Dlamini-Zuma in December 2009, requesting a copy of the AG’s report.

Gijima announced to its shareholders last week that home affairs had told the company that the contract was “not valid and enforceable”. Since then speculation has been rife about why Dlamini-Zuma and her new DG, Mkuseli Apleni, are so confident that they will survive a massive impending lawsuit by Gijima.

Significantly, home affairs did not “cancel” the contract with Gijima because of non-performance, instead informing the company that the contract was never “valid”.

This implies that Msimang and Mapisa-Nqakula paid the company hundreds of millions of rands since 2008 without a legally binding contract being in place.

Mapisa-Nqakula was abroad this week and could not be contacted.

Home Affairs, under pressure to disclose the reasons behind the abrupt decision to end Gijima’s contract, adopted a “no-comment” strategy this week. Government sources said it felt pressured by Gijima to explain itself in the media and decided, on legal advice, to stay mum until legal papers are served.

Insiders say a massive legal battle is looming and Gijima will “throw everything” at saving its multibillion-rand contract, which represents almost 15% of the company’s revenue.

Gijima’s lawyers are preparing a court application to set aside the department’s decision.

Dlamini-Zuma’s backers accuse Gijima of non-performance in not completing the installation of the visa-scanning equipment necessary for the World Cup in time for the tournament. This was one of the government’s guarantees to Fifa and Cabinet subsequently decided to ask the South African Revenue Service to take over the project.

But the visa-scanning equipment was only one part of the contract, which was supposed to revolutionise home affairs by transforming manual, paper-based processes into a technologically advanced system.

And, argue Gijima’s sympathisers, non-delivery was not the reason given by the department for cancelling the contract.

The Gijima camp also emphasises the department’s lack of funding and skills to implement the project and claims a memorandum written by former project leader Richard Peasey, published in The Sunday Independent last weekend, was a “coup” for the company.

In the letter Peasey blames the department for the unsuccessful rollout of the project.

A former GijimaAst employee working on the visa-scanning project, who spoke anonymously, called the project a “comedy of errors”. The source said the project started in 2008 but that by December 2009 not one project element was workable. “This represents hundreds of millions of rands that have been spent for nothing.”

The source said well over 100 GijimaAst staffers had been deployed, occupying an entire floor at home affairs at huge cost, to essentially produce “nothing”.

Gijima strongly denies this. According to the company, problems were experienced, but the department was well aware of them and attempts were under way to resolve non-performance and the inability to deliver on the project.

“Despite these challenges and the limitations placed on GijimaAst, GijimaAst still endeavoured to find a workable solution for the department in respect of the Fifa 2010 World Cup requirements to enable the [department] to deliver on its promise to the public,” Gijima said.