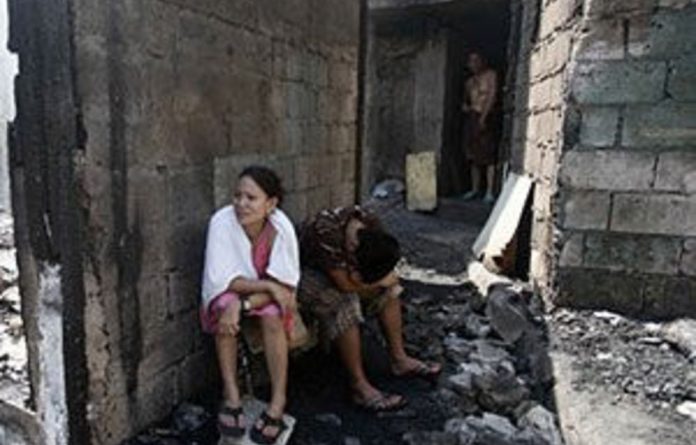 Thousands of people made homeless after a spectacular fire ripped through a crowded shantytown in the Philippine capital, Manila, queued for food on Monday as they pondered how to rebuild their lives.

Sunday’s blaze, likely started by a faulty power line, raged for more than seven hours and destroyed hundreds of homes in a depressingly familiar scene for the Manila region, where fires regularly engulf densely populated slums.

One man who escaped the fire but went back in to retrieve his air conditioner was the only person confirmed to have been killed, but four others were injured, according to local government official Obet Madarang.

Madarang, an aide to the mayor of Quezon City where the fire occurred, said 2 600 families, equating to about 15 000 people, had lost their homes and were now in desperate need of relief assistance.

“We have enough food but we are lacking drinking water and portable toilets,” Madarang said as a huge line of people queued up for assistance close to the charred remains of their houses.

One woman who lost her home, May Llegue (28), said survivors appreciated the food but were worried about many other necessities that the government had yet to provide.

“What we need is bedding because there are many children who have no place to sleep. And we need medical assistance for the elderly,” she said.

Llegue was among the thousands of people, many of whom earn a living doing manual labour, crowded on sidewalks and in parking lots near their burned homes.

Santa Jasio (77) said she and her paraplegic husband, Rufo, narrowly avoided death after one of their grandchildren helped them down four flights of stairs to safety.

But, with her husband lying next to her on cardboard sheets and the rest of her family trying to salvage what they could from the ruins of their home, Jasio was feeling anything but lucky.

“We lost everything. We don’t know what to do now,” she said.

“A lot of people are illegally tapping the power lines. That was also believed to have been the cause of the last fire here six years ago,” he said.

Madarang said the death toll from the fire was relatively low because it broke out in the afternoon when everyone was awake and able to evacuate.

“If it had happened at night, many people would have died,” he said.

Nearly four million people in Metro Manila, about 35% of the city’s population, live in overcrowded slums such as the one in Quezon City, according to United Nations data.

Fires often rip through them, but the resilient slum dwellers are known to rebuild their homes and lives nearly as quickly as they are destroyed.

On Monday, vegetable dealer Melinda Resti (49) had already reopened her store even though the rest of her building had been consumed by the blaze.

“The whole second floor and the back of the store were lost. We barely have a roof. But the storefront wasn’t burned,” she said.

Nearby Mila Balanza (53) kept a sharp watch over the remains of her food store, saying she feared some people would take advantage of the fire to take over her space.

“I hardly have anything left. Even the few items in my store were looted,” she said.

“But I will not leave, no matter what happens. I will be back. I already bought some cheap lumber so I can quickly start the rebuilding.” — Sapa-AFP