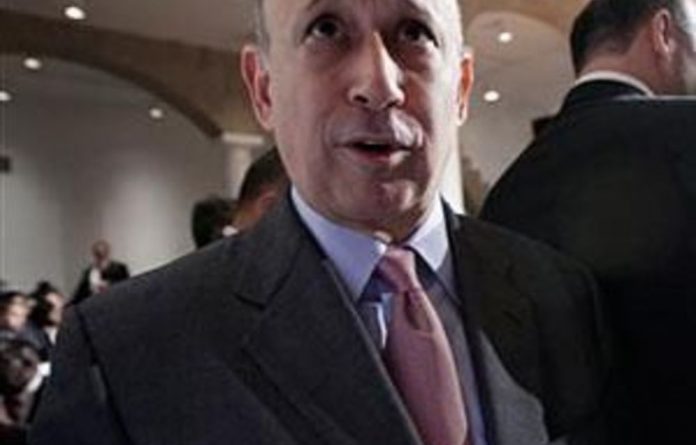 The masters of the universe were forced down to earth on Tuesday.

Goldman Sachs chief executive Lloyd Blankfein, the head of the most powerful investment bank in the world, faced a blistering cross-examination from United States lawmakers about the company’s ethics and behaviour toward its clients.

Blankfein conceded in the final hours of a nearly 11-hour hearing that the criticism of his firm would lead to soul searching. He said “everything that’s been the subject of criticism will be tightened up”, an indication that the pressure on Wall Street may be starting to change behaviour.

Blankfein, who was quoted late last year as saying he was “doing God’s work”, was asked time and time again whether it was morally correct for the bank to sell clients securities while at the same time the firm was betting against them.

“You’re going short against the very security [you’re selling] … many of which are described as crap by your own sales force internally.” said Levin, chairperson of the Senate Permanent Subcommittee on Investigations.

“How do you expect to deserve the trust of your clients, and is there not an inherent conflict here?” asked the Michigan Democrat.

Blankfein was the last in a parade of Goldman Sachs Group current and former executives who tried to fend off accusations they helped inflate the housing bubble and then made billions off the market’s collapse.

The hearing starkly illustrated the conflict between Washington and Wall Street over blame for the financial crisis, and resistance to some of the key financial reforms the Obama administration is trying to push through Congress.

Blankfein was frequently interrupted, told to answer the question and stick to the point. He often squinted as if puzzled by the questions and sometimes gave hesitant answers.

He said, as a market maker, it was not Goldman’s responsibility to tell customers how to trade or invest.

The hearing came less than two weeks after the US Securities and Exchange Commission (SEC) filed a civil fraud suit against Goldman, charging that it hid vital information from investors about a mortgage-related security.

“The government hates you. Your friends throw tomatoes at you. You are evil now. You are not the smart guy in the room — you are the evil, twisted greedy crook guy,” said Rogers.

The hearings recalled the Pecora Commission hearings that investigated the causes of the 1929 stock market crash. The head of the commission, Ferdinand Pecora, is often credited with popularising the word “bankster”, which combines “banker” and “gangster.”

Goldman bond trader Fabrice Tourre, the only individual named in the SEC suit, said he did not hide material information from clients.

Senator Tom Coburn, the top Republican on the subcommittee, accused Goldman of making Tourre “a whipping boy” and questioned the firm’s motivation for releasing personal emails from 2007 between Tourre and his girlfriend.

Blankfein stammered through his response, saying: “There were elements here that spoke badly to the firm, and we just wanted to come abreast of all the issues about which were bad to the firm.”

The current and former employees said Goldman was managing risk on individual positions rather than making a broad bet against the future of the housing market.

The Goldman executives spoke deliberately, but at times looked uncomfortable as they were asked to leaf through massive evidence binders, crammed with emails and other internal Goldman communications.

The executives insisted they took responsibility for their actions, but mostly blamed the housing crisis on broader industry issues, rather than their own conduct.

Former mortgage chief Dan Sparks came close to an apology, saying the bank “made some poor decisions in hindsight”. He added: “I don’t have any regrets about doing things that I think were improper, but we were participants in an industry that got loose.”

Levin told Sparks and other executives, “You should have plenty of regrets.”

The SEC’s April 16 fraud suit centres on a subprime mortgage-linked product known as “Abacus 2007-AC1.” The agency says Goldman failed to disclose that hedge fund Paulson & Co had input into its construction and was betting it would fail.

An $8-billion Dutch transport pension fund said on Tuesday it had dropped Goldman as its fiduciary manager, but said the decision had no connection to the SEC charges.

Levin closed the hearing by taking a final jab at Goldman for complaining that the committee cherry-picked from the company’s internal emails and other documents.

“That book in front of you is a whole bowl of cherries,” Levin said pointing at Blankfein and the evidence book. “These are not cherry-picked. Those documents reflect the history of what happened here.” — Reuters