Malema to face a hostile jury 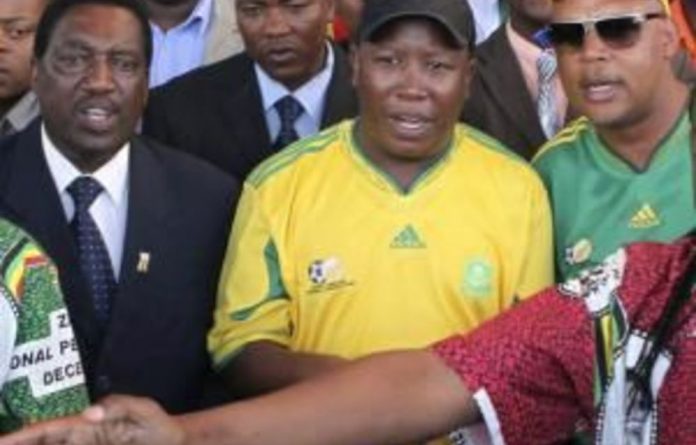 Julius Malema, the ANC Youth League president, faces a hostile disciplinary committee when he responds on Monday to charges of misconduct and bringing the party into disrepute.

Half of those on the committee have made it publicly clear that they are growing impatient with Malema’s outbursts and others are known to be firm advocates of discipline in the ANC.

The ruling party, through its spokesperson Jackson Mthembu, confirmed this week that Derek Hanekom, deputy minister of science and technology, will chair the committee, made up of Susan Shabangu, the minerals and energy minister; Zola Skweyiya, high commissioner to the United Kingdom; Collins Chabane, the minister in the presidency responsible for monitoring and evaluation; Ayanda Dlodlo, President Jacob Zuma’s parliamentary counsellor; and Febe Potgieter-Gqubule, a former ambassador to Poland.

Gwede Mantashe, the ANC secretary general, perceived as Malema’s arch-enemy, will not be on the panel. An ANC national executive committee member, who did not want to be named, said this was because Mantashe might have to deal with a later appeal from the hearing.

The ANC’s appeals committee is headed by Cyril Ramaphosa, a national executive committee member, though all appeals are facilitated by the secretary general’s office.

Mthembu refused to discuss details of the hearing because “it is a matter between the ANC national disciplinary committee and the ANC member concerned”.

Malema will cut a lonely figure as he faces the committee, despite the youth league initially backing him and making a presentation to the party’s top officials giving reasons why its president should not face adisciplinary hearing. Vocal support for Malema has been decreasing gradually, particularly since the ANC’s deputy secretary general, Thandi Modise, issued a confusing press statement last week saying the party had ‘preferred” charges against Malema, but that it was premature to pronounce on what they were.

A youth league national executive committee member told the Mail & Guardian that Malema would not have a legal representative, even though the party’s rules allow it.

Rule 25.7(b) of the ANC constitution states that any member of the party facing disciplinary proceedings is entitled to be represented by another party member in good standing who has been paid-up for at least three months.

Impartial elder
Hanekom is seen as an impartial party elder who is not clearly aligned to anyone who has indicated that he or she might challenge for a senior position at the 2012 electoral conference.

The disciplinary hearing has polarised the ANC’s top leaders and some party members regard the conflicting stances over the charges against Malema as a foretaste of the party’s 2012 succession battle.

The youth league plans to campaign for Fikile Mbalula, the deputy police minister, to take over as the next secretary general to force out Mantashe.

Skweyiya was one of the first senior ANC leaders to reprimand Malema in public, at a time when rebuking the youth leader was seen as carrying high political risk. After the ANC’s December 2007 Polokwane conference, he singled out Malema as having led the crusade to denigrate former president Thabo Mbeki, referring to the youth leader as “an embarrassment to the party” and as being “unAfrican”.

The former social development minister is one of the most respected senior ANC leaders and is widely seen as embodying the soul of the ANC.

Shabangu will add to Malema’s woes. She took him to task in February this year over his strident campaign to nationalise the mines. She said there would be no nationalisation in her lifetime, despite Malema threatening to withhold political support from any ANC leaders who opposed the initiative.

But it is Chabane who is the panel member probably most opposed to Malema’s political style. Their acrimony is rooted in a troubled political relationship in their common political base, Limpopo.

Chabane is a close ally of Lehlogonolo Masoga, a prominent political adversary of Malema in the province. Chabane is understood to feel that his allies have been removed from key positions in Limpopo since Cassel Mathale, who is close to Malema, took over as provincial ­premier.

Pressing on with process
The M&G has learned that senior ANC leaders decided to press ahead with the disciplinary process after information was leaked to the media that charges against Malema had been dropped.

The decision, said M&G sources, was taken to protect Zuma from perceptions that he is a lame duck, after Malema defied him in public. Malema sang the Kill the Boer struggle song in Zimbabwe after the ANC had asked him to avoid songs that could stoke racial tension and was seen to undermine Zuma’s Zimbabwe mediation efforts by declaring his support for Zanu-PF and President Robert Mugabe.

This week Floyd Shivambu, the youth league spokesperson, continued to deny any knowledge of the disciplinary hearing. “All I know is a statement by the deputy secretary general saying the ANC has preferred charges; but it has not yet laid those charges,” he said.

The last high-profile ANC disciplinary process was instituted against Mbulelo Goniwe, the party’s former parliamentary chief whip, in 2006. The panel found him guilty of abusing his office by trying to obtain sexual favours from party members, bringing the ANC into disrepute and conduct unbecoming to a member or public representative.

Goniwe was found guilty and his membership of the ANC was suspended for three years. This meant that he could not hold office in any ANC structure or serve as its public representative for that period.

The ANC constitution makes provision for any person found guilty in a disciplinary proceeding to appeal against the conviction or sentence to the next highest body within 14 days from the date of sentencing.

So should Malema be found guilty, a decision that is very unlikely according to those close to him, he will be entitled to appeal. But if Zuma has calculated the high political risk that could come with giving the youth leader a heavy sentence, Malema might just get off with no more than a slap on the wrist.