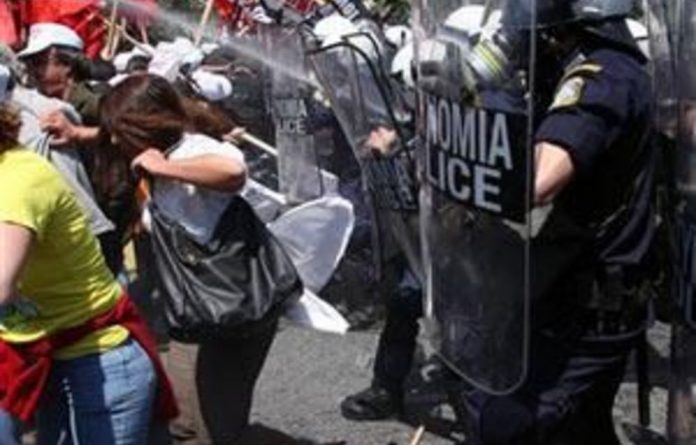 Greece’s economic crisis sent shivers of fear through global markets on Thursday over concern it could spread like wildfire through Europe and beyond.

German Chancellor Angela Merkel said Europe’s fate was at stake. France declared the euro was under speculative attack but said such a move would fail. And the Greek government vowed not to retreat a single step despite violence on the streets of Athens.

Anxiety the crisis may spread sent stocks tumbling worldwide. The euro sank to its lowest level in over a year, falling below $1,28 in Asia and down over 10% since the start of the year.

Japan’s Nikkei average fell more than 3% to its lowest level in nearly two months as the market caught up with the global sell-off following a three-day holiday this week.

Asian shares outside Japan as measured by the Morgan Stanley Composite Index index dropped 2% and the world stock index has now given up all of its gains so far in 2010 following the steep sell-off this week.

“The focus stays on the euro as the contagion trade persists,” said JP Morgan in a morning note. “Today’s ECB meeting has grown immensely in importance as the redeployment of some form of credit crisis tools seems increasingly possible.”

The European Central Bank holds its monthly meeting later on Thursday and, while it is expected to keep rates unchanged at 1%, it is likely to try to assure markets that it can prevent the Greek debt crisis spreading.

The cost of insuring Greek, Spanish and Portuguese debt against default has been rising. Moody’s placed Portugal’s credit rating on a three-month review, pointing to a downgrade and pushing the cost of insuring against the country’s default risk to a record high.

General strike
Concern that the Greek government will be unable to make all the budget cuts agreed with the EU and IMF over the weekend because of social unrest is one of the drivers of the euro zone turmoil.

A general strike shut down Greek airports, tourist sites and public services and about 50 000 demonstrators marched against the planned public spending cuts and tax rises, demanding that tax cheats and corrupt politicians be put on trial.

Three people, including a pregnant woman, choked to death when rioters set an Athens bank ablaze during a protest against wage and pension cuts that were the price of the €110-billion ($146,5-billion) EU/IMF bail-out agreed on Sunday.

Greek governments have a history of backing away from reforms due to public protests but Finance Minister George Papaconstantinou stressed that this time would be different.

“We are prepared to pay the heavy political cost,” he told parliament during a debate on the austerity bill. “We will not take a single step backwards.”

Merkel said the common currency was in the most serious crisis of its 11-year life, and other eurozone countries could be hit unless the Greek rescue succeeds.

European Monetary Affairs Commissioner Olli Rehn said the crisis must not spread. “It’s absolutely essential to contain the bushfire in Greece so that it will not become a forest fire and a threat to financial stability for the European Union and its economy as a whole,” he told a news conference.

“This is not an attack on Greece but on the euro, and it will fail, for two reasons. Firstly, because the euro zone is solid … and then because we have demonstrated solid solidarity in favour of Greece,” he told TF1 television.

asian contagion crisis
Merkel, whose foot-dragging many analysts have blamed for aggravating the Greek crisis, told Parliament the success of the rescue package would determine “nothing less than the future of Europe — and with it the future of Germany in Europe”.

Without the aid, a chain reaction threatened to destabilise the European and international financial system, she said in a debate on approving Berlin’s €22-billion contribution to the emergency loans for Athens, despite German public hostility.

One leading economist drew parallels with a past financial crisis which swept through Asia in the late 1990s.

“In some respects what is going on in southern Europe right now feels a lot like what went on in southeastern Asia in summer 1997,” said Stephen Roach, chairperson of Morgan Stanley Asia.

The IMF ended up bailing out Thailand, where the crisis began, along with Indonesia and South Korea. “It’s difficult to stop the bleeding with a package directed at only one country,” Roach said at a bankers’ event in Frankfurt.

Despite official denials, many economists are convinced Greece will have to restructure its debt, making private investors take a share of the pain.

Papandreou presented an austerity Bill to Parliament on Tuesday which foresees €30-billion in new savings. It is expected to pass, but the conservative opposition vowed to vote against it, dooming hopes of a political consensus.

So far, demonstrations have been limited to tens of thousands but anger is mounting, with opinion polls showing ordinary Greeks believe they are paying the price of the crisis while tax evasion and corruption go unpunished. – Reuters