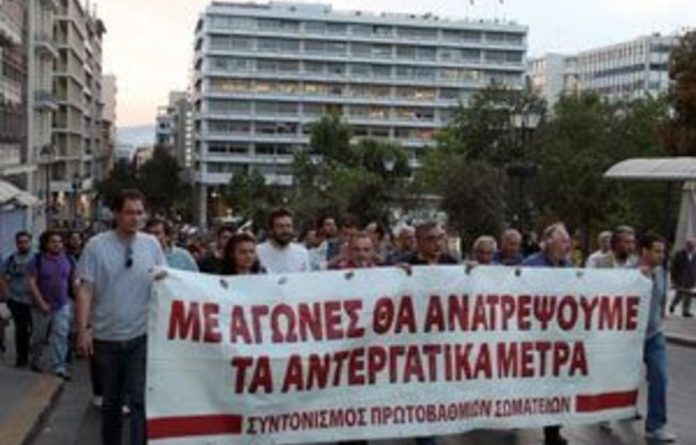 Greece on Wednesday was to receive a first dose of €5,5-billion from the International Monetary Fund (IMF) under a massive bailout loan agreed with the European Union (EU) in exchange for austerity cuts which are sparking new demonstrations.

“The IMF will provide €5,5-billion today and we expect an instalment from the European Union early next week.”

The EU has agreed to give Greece €14,5-billion as a first tranche, raising the instalment total to €20-billion. Athens needs to make a payment of €9-billion on a maturing 10-year bond on May 19.

The involvement of the EU and IMF in rescuing the crisis-hit Greek economy from default and the draconian cuts enacted by the government to clinch a three-year bailout loan have angered the country’s unions.

The unions have held a wave of street protests and three general strikes.

The two main unions, which account for some 1,3-million civil servants and private employees, are holding a new rally in Athens later on Wednesday.

“The country’s workers are maintaining the struggle and their opposition to the package of unjust and harsh measures,” the private-sector General Confederation of Greek Workers (GSEE) said in a statement.

Three people died in a firebombed bank last week during the last major union protest against the austerity measures.

The loan is part of a €110-billion rescue package — the first for a eurozone state — agreed with the EU and the IMF earlier this month.

Some economists have warned the austerity measures will plunge Greece into an even worse recession and stifle growth but many say the reforms being enacted — like the overhaul of the pension system — are long overdue.

IMF managing director Dominique Strauss-Kahn said on the sidelines of a conference in Switzerland that the reforms would get Greece “out of trouble”.

“It’s a very difficult programme, a very tough programme for the Greeks, but it is the right way to go back on track,” he said, adding that the Greek government was enacting “very, very painful but necessary cuts.”

The latest deficit-cutting effort is a pension reform unveiled this week to reduce average retirement payments by seven percent by 2030 while the upper category of pensions would be cut by up to 14%.

Most Greeks have voiced anger at the pension reform and the plan faces a difficult vote in parliament, where the government has a slim majority.

A labour ministry official told AFP the bill would go to parliament later this week at the earliest and the vote would take place by May 25.

Unions plan to hold another general strike against the reform. A date for the strike could be set later Wednesday. — AFP