Thai army turns up the heat on Bangkok protesters 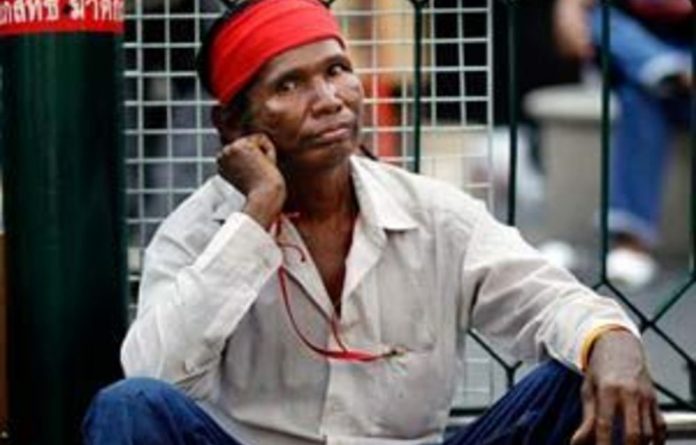 The Thai military said it would cut off supplies on Wednesday to anti-government protesters camped out in downtown Bangkok and might ultimately use force to clear them if they did not pack up and leave.

It is not the first time the authorities have threatened tough action to break up crippling rallies that have dragged on for two months, and the immediate defiant response from the “Red Shirt” protesters suggested the stand-off would continue.

“Please don’t threaten us. Whatever measure you use, we are not scared,” Weng Tojirakarn, a leader of the United Front for Democracy against Dictatorship (UDD) as the Red Shirts are formally called, told Reuters.

The authorities are faced with the dilemma of how to dislodge thousands of protesters, including women and children, from the camp they have occupied for five weeks, which sprawls across three square kilometres of Bangkok’s main shopping district.

Thailand’s finance minister said earlier that growth in South-east Asia’s second-biggest economy could be crimped by the unrest, which has scared off tourists and forced luxury hotels and upmarket malls to close.

At midnight, the army would shut off power, cut supplies and seal entrances to the plush district where thousands of Red Shirts remain behind barricades of tyres and bamboo staves, an army spokesperson at the government’s crisis control centre said.

“The measures to cut water and power are the first measures. If the protest does not end, we have to fully enforce the law, which may involve using force to reclaim the area,” said spokesperson Sansern Kaewkamnerd.

Severing supplies to the protest camp will present a huge logistical challenge — the occupied area is crowded with hotels, embassies and high-end residential complexes, some of which are still operating.

Attempts to intercept Red Shirt supplies could also risk clashes on the fringes of the area.

“We are trying our best to avoid the use of force to prevent any casualties, which is why we came up with these initial measures, which include cutting off supplies and closing off routes into the area,” said Sansern.

Early election
Prime Minister Abhisit Vejjajiva offered an election on November 14 — just more than a year before one is due — to try to end rallies that began in mid-March with a demand for an immediate poll.

Twenty-nine people have been killed and more than 1 000 wounded in Thailand’s worst political violence in 18 years.

The protesters, mostly supporters of former prime minister Thaksin Shinawatra, who was ousted in a coup in 2006, have accepted the election date but are pushing other demands, in particular wanting a deputy prime minister to be charged over a bloody clash with troops in April in which 25 people died.

Abhisit’s tone has hardened in the past two days. Late on Tuesday he said the security forces needed to “take measures” quickly and the protesters had to leave on Wednesday.

The protests are the latest instalment in a political crisis that has festered since Thaksin’s populist premiership, exposing deep divisions between the rural and urban poor who are the core of the Red Shirt movement and the Bangkok middle classes and traditional royalist elite.

At the protest site on Wednesday, where a ramshackle network of tents, trailers, food stalls and mobile toilets has spread across some of the capital’s smartest streets, there was no sign of protesters packing up or greater security force activity.

“They said they want reconciliation and they are threatening to cut off supplies,” said Komsan Sukpradit, a 48-year-old Red Shirt guard who was patrolling the area after getting blessed by a chanting Buddhist monk.

“It just shows they are not interested in making up. They will crush us given a chance and we can’t let that happen.” — Reuters