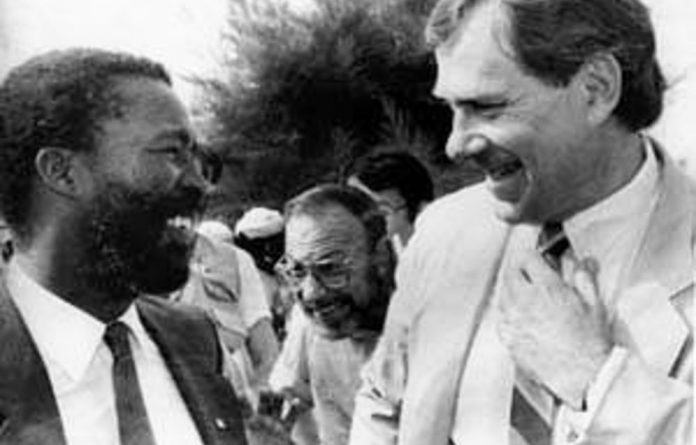 “He died peacefully, with his family,” she said.

Van Zyl Slabbert (70), once viewed as one of South Africa’s most gifted public figures, had been admitted to Johannesburg’s Milpark Hospital and was reportedly being treated for liver and other problems.

Perhaps best remembered for his pioneering work in opening up dialogue between Afrikaners and the then-exiled African National Congress (ANC), he had a conventional Afrikaner upbringing.

He was born in Pretoria on March 2 1940, and spent his formative years in Pietersburg, now Polokwane, in what is now Limpopo, where he captained his school’s first cricket and rugby teams.

He studied for 18 months at the Dutch Reformed Church theological seminary at Stellenbosch University before deciding sociology was his proper calling.

He completed a BA Honours at the university in 1962, and was awarded a doctorate in 1967.

From 1964 to 1973 he lectured in sociology at Stellenbosch, Rhodes and the University of Cape Town.

During this period his interest in the position of the coloured people of the Western Cape led him into confrontation with the National Party, and he joined a multi-racial discussion group named Synthesis, which sought to promote black-white dialogue.

In 1973 he was appointed head of the department of sociology at the University of the Witwatersrand.

The following year, standing for the Progressive Party (PP), he won the Rondebosch parliamentary seat from the United Party.

He maintained afterwards he had been persuaded to stand only after a hard night’s drinking with PP members.

Disillusioned
In 1979 he accepted the leadership of the party — by then known as the Progressive Federal Party (PFP) — and of the official opposition in Parliament, and led the PFP to substantial gains in the 1981 general election.

In 1985 he travelled to Lusaka for talks with the external wing of the ANC and, with Inkatha’s Chief Mangosuthu Buthelezi, launched the National Convention Movement in an unsuccessful attempt to pressure the government to negotiate with all political groups.

By this time Van Zyl Slabbert, who was said by one acquaintance to have a “non-existent boredom threshold”, was becoming increasingly disillusioned with the tricameral Parliament, which in his view was a hopelessly flawed constitutional experiment.

In February 1986 he publicly announced his resignation from Parliament and the leadership of the PFP, which he had informed of his decision only an hour earlier.

Fellow front-bencher Helen Suzman labelled it betrayal, but he strongly defended his move, saying he refused to be “in the slipstream of the government’s repression and incompetence”.

His desertion of the PFP sparked criticism that while he had the brains for a politician, he lacked the balls.

“Ja,” he responded with a wry smile. “The trouble with this country is you have too many politicians with balls but no brains.”

In July 1986 Van Zyl Slabbert, with another former PFP, MP Alex Boraine, formed the Institute for a Democratic Alternative for South Africa (Idasa).

He became a director of Idasa, and undertook an intricate process of shuttle diplomacy aimed at bringing resistance groups together with influential figures in the white establishment in South Africa.

In July 1987, to the government’s fury, he took a group of about 60 influential white South Africans, most of them Afrikaners, to Dakar, Senegal, for talks with an ANC delegation.

Business
In the 1990s he branched out into business, becoming chairperson of Caxton Publishers, Adcorp Holdings and Metro Cash ‘n Carry, as well as holding various directorships.

He also co-founded Khula in 1990, a black investment trust.

In 2002 then-president Thabo Mbeki appointed him to head a team investigating a new electoral system for the country.

Its recommendation, a more accountable mix of constituency-based and proportional representation, was quietly shelved by the government.

He accepted the position of chancellor of his alma mater, Stellenbosch, in 2008, but at the end of that year suffered a heart attack, and had a pacemaker installed.

The following year he quit the Stellenbosch post, along with his company directorships, in order, he said, to spend more time with his wife and family.

He authored a number of books, including a semi-autobiographical analysis of tricameral politics, The Last White Parliament, which appeared in 1992.

In May that year he wrote that his fear was not that there would not be eventual consensus on the principles of a new democratic constitution for South Africa.

“Far more disturbing are the expectations that people have of what a democracy can deliver, and which research shows it is incapable of doing.

“This in the South African context is the real burden of democracy.”

He leaves his wife Jane and two adult children, Tania and Riko, from a previous marriage. — Sapa