On reaching the other side 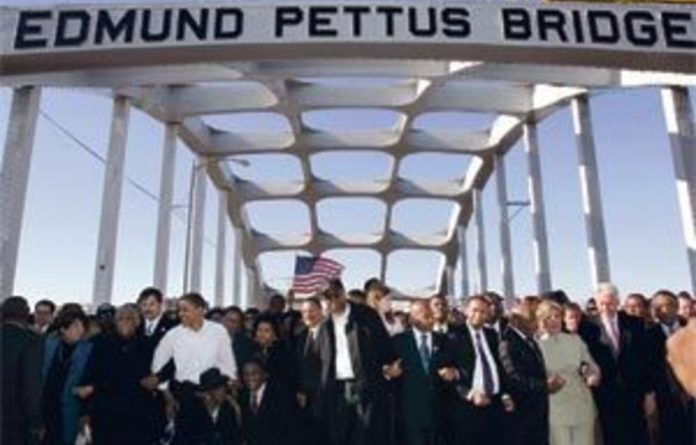 A Bridge: The Life and Rise of Barack Obama
by David Remnick (Picador)

Bill Clinton promised a bridge to the 21st century; Sarah Palin railed against an Alaskan “bridge to nowhere”; Simon and Garfunkel crooned of a bridge over troubled water and Ian Paisley, the Northern Irish politician, asked about intercommunal bridge-building, once said that bridges were like traitors because “they go over to the other side”. There may be no social or political metaphor that is more over-worked and yet, if you travel south of the Mason-Dixon line and ask black people of a certain generation about “the bridge”, they will very likely know what you are on about.

It was on March 7 1965 that a few hundred disciplined civil rights marchers attempted to march from Selma, Alabama, to the state capital in Montgomery. Their way lay across the Edmund Pettus bridge, a span named for the last Confederate army general to hold a seat in the Senate. They never got to the other bank of the river. A mob of policemen and vigilantes rode into them on horseback, spraying gas and wielding clubs and whips. Dozens of people were seriously hurt in the retreat. But, 100 years after the end of the civil war, this really was the last stand of the Old South.

So great was the national outrage at the televised pictures that within a few days President Lyndon Johnson had appeared before Congress and proposed a Voting Rights Act, in a tremendous speech that culminated in his Texan twang uttering the words: “And we shall overcome.”

Ever since then, the symbolic crossing of the Edmund Pettus bridge has been an annual ritual of pride for the survivors. In 2007 a young black senator from Illinois was invited to be one of the speakers at the event. It is David Remnick’s contention that this moment was the true launch of Barack Obama’s campaign, and that the success of that campaign represents the final and complete traversal of that bridge.

In the iconography of the movement, there is the “Moses” generation of men and women who fought for a liberty that they might never live to see, and then there is the “Joshua” generation of those who grew up in the new dispensation. Perhaps the great Mosaic survivor was the Reverend Fred Shuttlesworth of Birmingham, Alabama, whose church was blown up with (Remnick doesn’t mention it) several of Condoleezza Rice’s little schoolfriends inside.

On the day that Obama made his speech in Selma, laying claim to the title of Joshua, he moved from the pulpit to the river and found the old veteran stricken by a brain tumour and confined to a chair. “On the bridge, he chatted awhile with Obama. And then Obama, who had read so much about the movement, who had dreamed about it, took off his jacket, rolled up his sleeves, popped a piece of Nicorette gum in his mouth, and helped push the wheelchair of Fred Shuttlesworth, a leader of the Moses generation, across the bridge and over to the other side.”

I should probably say here that I know Remnick to be a very nice guy and a very sweet writer, and that his own popping of the Nicorette gum into that otherwise pious paragraph rather raised my expectations. Is there anything apart from global warming that American liberals despise more than a smoker? (We know from the recent report of his physicians that the president continues to puff to this day.) Yet, with few exceptions, this narrative stays with the well-worn imagery of Exodus and the Jordan and concurs with the idea that Obama’s inauguration rounds off a historical cycle.

It was the Clintons who first banned smoking in the White House and it was also the Clintons who arrogantly believed that they somehow “owned” the black vote. It was on that same day in Selma in 2007 that they began to fear a challenge to their presumptive monopoly. Still they trusted, with many others, that not enough white voters would be attracted to a man — “Barack Hussein Obama”, as one of their aides used to hiss it for effect — whose last two names were reminiscent of the United States’s most feared and hated Middle Eastern enemies.

The Bridge is the story of how Obama managed to seduce the black vote while simultaneously attracting a strategic proportion of voters from all other communities as well. One of the clues to this lies in the fact that Obama really is an “African American”.

Not always taking his hero at face value, Remnick shows us the ways in which Obama “improved” his life story. He publicly described his truant father, for example, as a victim of British colonialism in Kenya who had been treated as a mere servitor.

This turns out not to be true at all: Obama senior was a member of an educated elite and enjoyed positions of trust and responsibility in the US as well as back home, until the bottle got to him. He may have been a victim of racism, but it would be more exact to say that he was a victim of tribalism.

Older readers will well remember the attractive figure of Tom Mboya, great hope of Kenya at independence but murdered by vicious local infighting. The Obamas come from the same minority Luo people as Mboya did and, if you want to visualise a useful background for a successful multiracial American politician, you could do worse than imagine the lessons learned by a young man who saw what ethnic fratricide had done to his father, and his fatherland.

Next, after an upbringing in Muslim Indonesia and rainbow-hued Hawaii, it might be useful to study under Edward Said at Columbia University.

Remnick is tantalisingly brief about this period but tells us that Obama thought of the anti-Eurocentric Palestinian professor as a “flake” and took the view that it was better to read Shakespeare in the original than to be reading the criticism. Then on to Harvard and to the chairmanship of the college’s Law Review, where he excelled at publishing all opinions but his own and calming many editorial teapot tempests. (When things became emotional he would counsel his team: “Remember: nobody reads it.”) That last point illustrates Obama’s other great strengths: the ability to be amusing at his own expense, and the seemingly complete absence of any resentment. A winning way with discrepant constituencies and a genius for horse-trading and compromise are very necessary attributes for a Chicago politician, which is what Obama then decided to become. Here I prefer his autobiography to Remnick’s account, purely and simply because of its self-deprecating charm.

Everything broke Obama’s way: he was faced at election times either by extreme black nutcases of left and right, or by white Republicans who were effectively caught selling their wives on eBay.

It’s one thing to be lucky: it’s another thing to admit that luck has been yours. Obama has never been hubristic on that score. The closest he came to a flameout was by way of his hitherto fortunate association with the black pulpit, this time in the form of the big-mouth and phoney Rev Jeremiah Wright, preacher of paranoia and conspiracy.

Yet it was the manner in which he dug himself out of that hole, with his Philadelphia speech on the race question, that convinced a cadre of experienced Chicago Democrats, such as David Axelrod and Rahm Emanuel, that Obama was the one. From then on the Clintons and the Republicans guaranteed the continuance of the charmed life: the former by pandering to racism in a fashion that still hasn’t been sufficiently condemned and the latter by — well, take your pick.

This is a thick book about a still rather slim curriculum vitae. Remnick makes it worthwhile by building in some enlightening passages about the history of Kenya, Hawaii and the long battle for black emancipation. He doesn’t say enough about a question that fascinates me and enrages the American right: the possibility that the president of the United States is not a Muslim but, worse, an unbeliever. He succeeds in showing that Senator Obama was never as anti-war as all that. He tells us (this is a relief) that the candidate thought the famous slogan “Yes we can” to be rather vapid. It’s all in the details, as we glance back over the bridge across which it’s impossible to imagine ever returning. — Guardian News & Media 2010