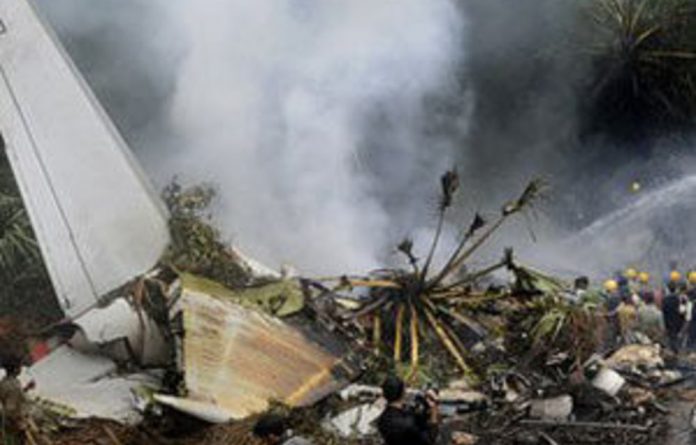 An Air India Express passenger plane from Dubai crashed outside an airport in southern India on Saturday, killing at least 160 people when it burst into flames after overshooting the runway and ploughing into a forest.

There may have been five or six survivors, local media said.

One eyewitness said the plane skidded off the runway in rain at Mangalore airport in Karnataka state.

Air India said the plane was a Boeing 737-800, with 166 people on board, including six crew members. Air India Express is the budget arm of state-run carrier Air India.

“At least 160 passengers have died in the crash,” VS Acharya, home minister of the southern state of Karnataka, told reporters. “At least five to six people have been taken to hospital, their condition is not known.”

First indications are that the crash was an accident, officials say.

Television channels said the plane crashed at about 6.30am local time (1am GMT). TV images showed it struck a forested area. Flames were seen blazing from some of the wreckage as rescue workers fought to bring the fire under control.

“The plane had broken into two. I jumped out of the plane after it crashed. I saw two other people also come out,” Abdullah, a survivor from the plane, told local channel TV9 from hospital.

“There was tyre-burst kind of noise. I tried to get out of the front but saw that there was a big fire. So I went back again and jumped out from there.”

One television channel showed a fireman carrying in his arms what seemed to be the remains of a child. Charred bodies and an engine lay in the forested terrain.

“The flight had already landed. There was slight rain. The flight skidded off,” eyewitness Mohiuddin Bava told CNN-IBN channel. “After that it caught fire. Villagers, everyone there, came to rescue. The plane wings are right in front of me now.”

Air India is a state-run loss making carrier. The government has been trying to infuse funds to revive the airline against stiff competition from private carriers.

1990
February 14: Passenger plane from Mumbai crashes on landing at Bangalore airport, killing 92 out of 146 passengers

1993
April 26: Indian Airlines flight stopping on route from Delhi to Mumbai crashes on take-off at Aurangabad airport in Maharashtra, killing 55 of 118 passengers