Readings in the spectacle of fashion 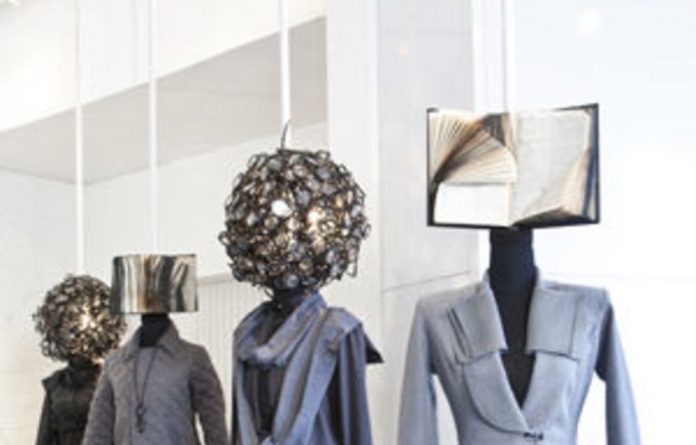 ‘One out of five people can’t read. Four out of five people can’t listen,” read the words on a grey-and-black felt shoulder bag hanging in the window of local fashion house Black Coffee’s studio and store at Arts on Main. Meant to reflect literacy statistics in South Africa, the slogan is laser-cut into the sooty layers of fabric. This one-off item is part of Black Coffee’s new conceptual retail project BLKBOX and the slogan it brandishes was the inspiration for the bookish designs, text prints and profusion of spectacle frames that distinguish this new range.

Travelling exhibition
BLKBOX is touted as a travelling installation exhibition, not just a new clothing range. Although a few garments are lined up on rails at one end of the shop, the rest of the display borrows from the conventions of installation art. It uses sculptural elements, sound, graphic material and careful spatial organisation to create an immersing environment. Although the vital ingredient in this display is the clothing, it is more than the sum of its parts.

The garments featured in BLKBOX are based visually on an open book. On one jacket, a minimalist ruffle attached to either lapel of the collar looks just like an old book slouching open on a reading table. A long scarf and a smart dress coat are both covered in a text print gleaned from an ancient edition of the King James Bible. These outfits are worn by custom-made mannequins that, for heads, have giant baubles made from black-rimmed spectacles. The bauble-headed character played by the mannequins is a visualisation of a pun; named “The Spectacle”, it is meant to inspire an alternative way of seeing the spectacle of fashion.

Besides its unusual aesthetic approach, BLKBOX also has something important to say about the relationship between high fashion and society. It looks beyond the pretty pleats, the pencil legs and the glamour of the catwalk to show how real issues in contemporary South Africa can be relevant to fashion, an industry generally better known for its frivolity than its social conscience.

Tackling intangible illiteracy
BLKBOX doesn’t promise any book drives or reading classes. It tackles more intangible kinds of illiteracy in South Africa — the widespread failure to see value in artistic endeavours and an endless demand for American and European designer products made in the Far East, at the expense of local designers and labour.

Ironically displayed around the till, a limited edition of art an book comments on the fashion industry’s complicity in commodity-driven culture. The imagery and text in this book are based on French philosopher Jean Baudrillard’s idea that in postmodern culture, being is understood in terms of having and having is validated by appearance. The Spectacle character reappears in this social critique, now more monstrous than ever, as a tongue-in-cheek reference to French artist Guy Debord’s famous 1967 treatise The Society of the Spectacle, a violent rebuttal of commodity culture in Europe in the 1960s.
With all this revolutionary banter, you would think they would be giving away their magnificent clothes for free. But they are not.

Black Coffee’s till is still fully operational, which spells doom for this reviewer and her well-worn credit card.