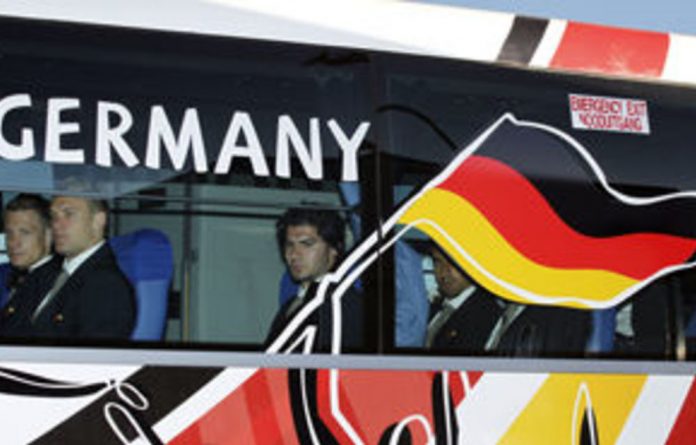 Germany were the latest World Cup giants to touch down in South Africa for the first World Cup staged on the continent.

The three-time champions landed at Johannesburg international airport on a crisp, clear Monday morning after the first official flight of the national airline in an Airbus A380 jumbo.

“It was a great experience to be on the first A380 flight,” coach Joachim Loew told reporters as he and his 23-man squad completed immigration details before heading for a hotel near Pretoria.

“We want to show South Africans from the outset that we are happy to be in their country,” added manager and former national team striker Oliver Bierhoff.

Germany finished third behind Italy and France when they hosted the tournament four years ago and were runners-up to Brazil in the 2002 finals in South Korea and Japan.

They are traditionally considered title contenders regardless of the state of the national team because of their famed refusal to give up no matter how desperate the situation in a World Cup match.

Hopes of Germany going all the way in the June 11-July 11 tournament did suffer a massive blow last month when midfield conductor and captain Michael Ballack was ruled out after tearing ligaments in the English FA Cup final.

The injury followed a heavy tackle from Germany-born Kevin-Prince Boateng, a member of the Ghana squad that also landed in Johannesburg on Monday and which will contest Group D with Germany, Australia and Serbia.

Defender Philipp Lahm has been elevated to Germany captain with Bayern Munich teammate Bastian Schweinsteiger the new vice-captain of the three-time champions.

Germany had glamorous company on their flight from Frankfurt in the shape of Shakira, the Colombian singer who will feature in a pre-tournament concert on Thursday. — AFP