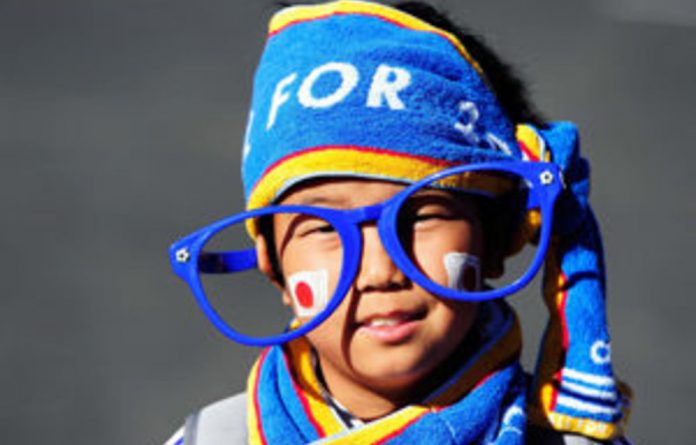 Holders Italy came from behind to avoid an upset against Paraguay on Monday but unfancied Japan broke African hearts with their first Soccer World Cup win on foreign soil against a Samuel Eto’o-led Cameroon.

Day Four’s on-field excitement put the attention firmly back on soccer after the first serious unrest of the tournament when South African police in Durban used teargas and rubber bullets in the early hours to quell a protest by stadium stewards.

Italy, whose ageing team has been largely written off despite their No. 5 world ranking, were stunned by a first-half opener from Paraguay. The South Americans were dreaming of another upset after qualifying wins over Brazil and Argentina.

But the resilient “Azzurri” squared the game in the second half through a scrambled goal from Daniele De Rossi.

One of the poorest nations in Latin America and with a population of just six million, Paraguay have had to overcome the loss of striker Salvador Cabanas, who is in rehabilitation after being shot in the head at a Mexican night club in January.

Japan shock Cameroon
Another underdog, Japan, did pull off a minor upset, shaking off a run of miserable form to defeat Cameroon, one of the brightest hopes for African success, 1-0.

So far, only Ghana from the continent have won in the opening round of games in Africa’s first World Cup.

In Monday’s other match, the Dutch notched a comfortable 2-0 victory against Denmark but failed to show the exciting, attacking football for which they are renowned.

Netherlands went ahead courtesy of a freak own goal when Simon Poulsen’s header from a Dutch cross rebounded off fellow defender Daniel Agger and rolled into the net.

Dirk Kuyt scored the second in the dying moments.

The surprise of the day, though, was Japan, whose terrible form in the build-up had led to assumptions the Asians would be easily dealt with by Cameroon’s “Indomitable Lions”, including three-times African Player of the Year Eto’o.

Cameroon, hoping to recapture the form that took them to the quarter-finals in 1990 and one of Africa’s best hopes for a long run in the tournament, were largely a disorganised mess and repeatedly failed to feed their front three.

Japan came to the game in the chilly central city of Bloemfontein after a run of just one goal from their previous five matches including a 0-0 draw against Zimbabwe last week, organised at late notice supposedly to chalk up a comfortable confidence-building win for the Asians.

Vuvuzela’s here to stay
South Africa’s vuvuzela horns, variously compared to the noise of charging elephants or swarming bees, are providing a raucous backdrop to games and dividing opinion round the world.

While some see them as providing local flavour, others want the ubiquitous colourful plastic trumpets banned because they prevent players and coaches communicating. Either way, there is a roaring trade in ear-plugs in South Africa right now.

Local organisers were adamant on Monday, however.

“Vuvuzelas are here to stay and will never be banned,” said Rich Mkhondo, a spokesperson for the local World Cup committee.

Fans were licking their lips at some juicy encounters coming on Tuesday. Secretive North Korea were to face five-times world champions Brazil, while Côte d’Ivoire were sweating on the fitness of Didier Drogba ahead of their clash with Portugal.

When not playing or training, players were being pampered like royalty at their luxury hideaways.

Chef Geoffrey Murray said he was baking about 120 baguettes a day, while croissants, crepes and brioche were also in hot demand at the coastal hotel housing the French squad.

Celebrity cook Tim De’Ath, who has previously been personal caterer to Hollywood luminaries like Leonardo DiCaprio, was cheering up the English — after their goalkeeping howler against the United States — with afternoon hot chocolate.

Argentina’s manager Diego Maradona was not so lucky, however. Agriculture officials stopped his team from flying in prime steak from South America.

Around the world, fans were cramming round TV screens in bars, homes, offices and parks to enjoy the festivities.

Power-cuts, though, have enraged Zambians and provoked riots in Bangladesh. In the developed world, too, there have been problems, English fans outraged when broadcaster ITV inexplicably cut to a commercial during a goal by their team. — Reuters