BP faces grilling in US Congress 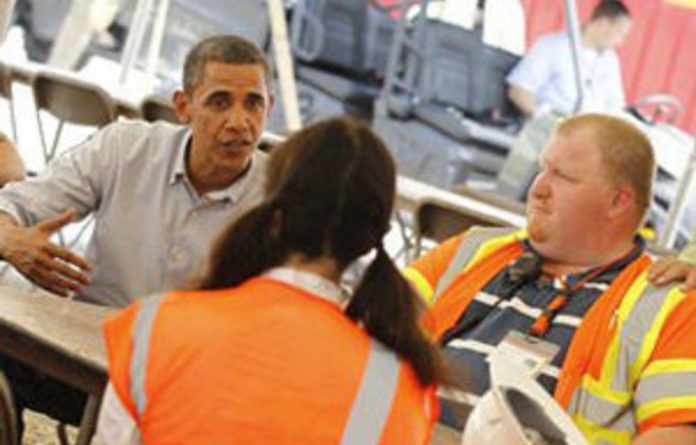 BP’s US chief faces accusations in Congress on Tuesday that the energy giant caused the worst oil spill in US history with a calculated strategy to cut costs, hours before President Barack Obama uses a televised address to defend his handling of the disaster.

A day after BP shares fell 9% in London and New York and the company hired investment bankers for undisclosed reasons, US lawmakers will ask Lamar McKay why BP made repeated choices that appeared to favour cost savings over safety before its rig blew up in the Gulf of Mexico.

McKay, the head of BP America, will be surrounded at the congressional hearings by executives from Exxon Mobil, Chevron, ConocoPhillips and Royal Dutch Shell seeking to stave off repercussions for the industry.

McKay’s rivals are likely to hang him out to dry in a rush to prove their companies would never take such risks or face such failures as the spill that has poured millions of litres of oil into the Gulf of Mexico.

The April 20 explosion on an off-shore rig killed 11 workers and ruptured BP’s well. The spill has fouled 190km of US coastline, imperiled multibillion-dollar fishing and tourism industries and killed birds, sea turtles and dolphins.

In a pivotal week in the crisis, Obama wraps up a two-day trip to the Gulf on Tuesday before returning to Washington to give a televised speech aimed at seizing political momentum that has slipped away as the oil flows unabated.

Some Gulf residents are angry at the commander-in-chief.

“This is ridiculous. This is America. They’re letting BP control this country? Or any other oil company? What’s going on in this world?” said oyster dock manager Terry Alexis in Empire, Louisiana.

Obama said he would press BP executives to deal “justly, fairly and promptly” with damage claims when he meets them at the White House on Wednesday.

The spill has overshadowed Obama’s political agenda of job creation and Wall Street reform — both key issues in November congressional elections in which his fellow Democrats are expected to face tough fights to hold on to their majorities.

Grilling in Congress
BP has lost more than 40% of its market value since the crisis began and faced a barrage of criticism over its handling of the cleanup. Last week, it was confronted with a White House threat to widen its liabilities for the disaster.

Two Democratic lawmakers said British-based BP chose faster and cheaper drilling options in the Gulf of Mexico that “increased the danger of a catastrophic well failure”.

“It appears that BP repeatedly chose risky procedures in order to reduce costs and save time and made minimal efforts to contain the added risk,” Henry Waxman and Bart Stupak, the top Democrats on the House of Representatives Energy and Commerce Committee said in a letter ahead of Tuesday’s hearing.

They quoted emails sent before the explosion by BP drilling engineers who called the project a “nightmare well” and said a team leader who opted not to use extra equipment to reduce the potential for gas flows into the well was “right on the risk/reward equation”.

A BP spokesperson declined to comment on testimony before the hearings, which many investors see as political theatre.

“The BP hearings will be a prime opportunity for members of Congress to show off their populist credentials,” said Michael Block, chief equities strategist at broker Phoenix Partners Group, declining to make a call on BP stock.

US politicians have been calling on BP to scrap its quarterly dividend to ensure it has enough money on hand to pay the compensation claims and clean up the spill.

BP has hired investment banks Blackstone, Goldman Sachs and Credit Suisse as advisers, a source familiar with the matter said, without identifying the purpose of the advice.

Alternative energy plan?
“The biggest thing he [Obama] can do is make sure that this doesn’t happen down the line,” National Wildlife Federation naturalist David Mizejewski said in a boat off Louisiana’s tiny Queen Bess island. “We need to get serious about passing clean energy and climate legislation now.”

The smell of crude oil and dispersants filled the air and oily brown pelicans teemed on the island.

But stopping drilling is a double-edged sword for many on the Gulf of Mexico, who count on oil rigs to keep their states economically afloat.

Moody’s Investors Service warned in a report on Monday that it could be up to two years before oil production reaches pre-spill levels and that a six-month moratorium on deepwater drilling by the Obama administration posed many uncertainties. – Reuters