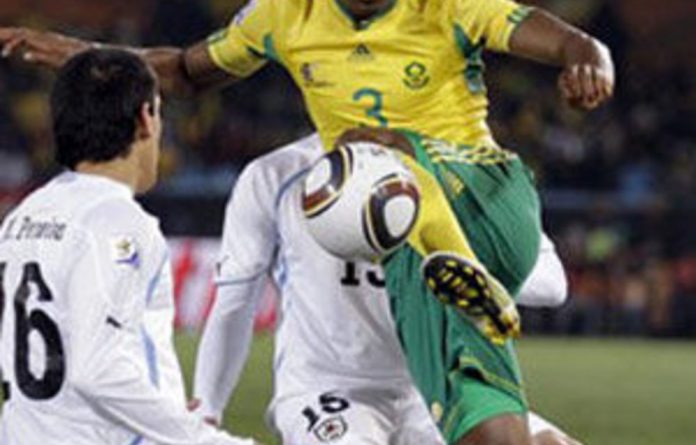 An inspired Diego Forlan scored twice as World Cup hosts South Africa’s hopes of progressing to the knockout stage suffered a heavy blow with a 3-0 loss to Uruguay on Wednesday.

A 24th minute strike and then a controversial 80th minute penalty from Forlan, which saw home keeper Itumeleng Khune sent off after he was ruled to have brought down Luis Suarez, did the damage.

A last-minute header from Alvaro Pereira rubbed in the defeat and sent the despondent home support at the Loftus Versfeld rushing to the exits.

Impressive Uruguay are now in a strong position on four points from two games while South Africa have just a point.

The defeat was the worst for a host nation since Mexico lost 4-1 at home to Italy in the 1970 quarterfinal and there was a good deal of Italian style about the way Uruguay went about clinically and patiently dissecting their opponents.

Group A rivals France and Mexico, who both drew their opening games, face each other on Thursday in Polokwane and any winner of that game would be in a handsome position heading into the final round of games.

A night that had begun with an electric atmosphere from the passionate home crowd ended in dismay for the Bafana support, many of whom left before the end, vuvuzelas tucked dejectedly under their arms.

Uruguay began with some urgency, moving the ball well through midfield and they grabbed the lead in the 24th minute through a slightly deflected, dipping drive from Forlan which crashed in off the underside of the bar.

The goal woke the home side up and with Steven Pienaar influential they began to finally get a grip in midfield but with Katlego Mphela frequently left alone as a striker, they lacked attacking options.

Midfielder Kagisho Dikgacoi was cautioned two minutes before the interval meaning that he will miss the final group game but Brazilian coach Carlos Alberto Parriera was left with plenty of questions to answer at the break.

There was little change to the pattern of the game with Uruguay in control for large stretches and South Africa lacking potency and options in attack.

Suarez had a shout for a penalty turned down after he tumbled under challenge from Bongani Khumalo and Diego Lugano missed a good chance for Oscar Tavarez’s Uruguay side.

Suarez then went down under challenge from Khune’s flaying legs and while the decision was greeted with strong protest, Forlan kept his composure and blasted home the penalty.

Pereira completed the scoring with a header from a good cross from the right by Suarez but by then the game was over and with it, perhaps, the dreams of the host nation. – Reuters