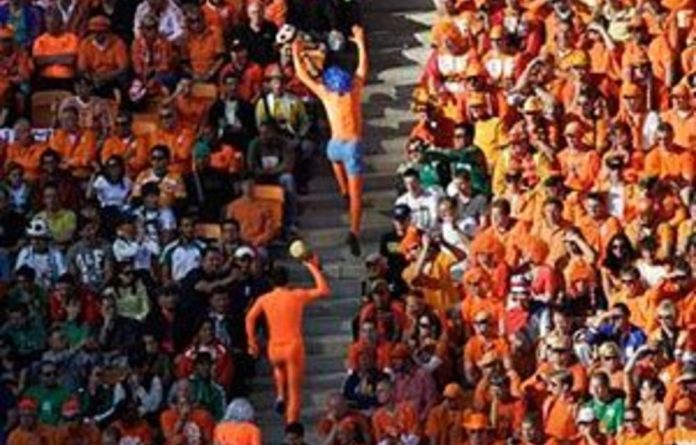 Two Dutch women were arrested on Wednesday over alleged ambush marketing, for organising 36 women to wear short orange dresses made by a Dutch brewery to a World Cup match, police said.

The dresses were sold with Bavaria Beer packs in The Netherlands in the run-up to the World Cup, and Fifa says the group wore them to Monday’s Netherlands-Denmark match as a marketing stunt in defiance of its strict commercial regulations at matches.

The women were detained during the match at Johannesburg’s Soccer City and taken to a Fifa office where they say they were questioned for several hours.

The two arrested on Wednesday were part of that group, and now face three possible charges, including a violation of the Merchandise Marks Act, police said.

The case against the two women was postponed in the Johannesburg Magistrate’s Court on Wednesday.

They would return to the court on June 22 to enter a plea, and to be tried.

“These women, who have been part of a larger group, are suspected to be involved in organised acts to conduct unlawful commercial activities during the Denmark-Netherlands match,” the police statement said.

“We view ambush marketing in a very serious light and we urge people not to embark on these ambush campaigns,” it added.

Verhagen “finds the arrest and [criminal] charge to be a disproportional reaction”, he said in a statement released by the Dutch Foreign Ministry.

“It is outrageous that the two women have a jail term hanging over their heads for wearing orange dresses in a football stadium,” Verhagen added.

“If South Africa or Fifa wants to take a company to task for an illegal marketing action, they should start judicial procedures against the company and not against ordinary citizens walking around in orange dresses.” — AFP, Sapa