Bafana: We are not giving up 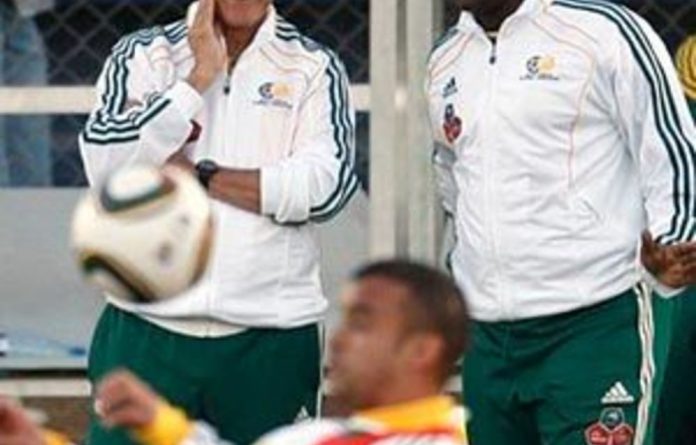 There is still fight and life left in Bafana Bafana despite their 3-0 World Cup Group A thrashing by Uruguay at Loftus Stadium on Wednesday night, which all but ended Bafana’s 2010 dreams.

That was the feeling of Bafana assistant coach Pitso Mosimane, who admitted Bafana have a mountain to climb in order to stay in the tournament.

The stark reality, however, is Bafana were cruelly exposed for what they are — a workmanlike side that was outplayed and outgunned by a much superior Uruguay — and despite Mosimane’s optimism, it is going to take a miracle to prevent Bafana from becoming the first World Cup hosts in history to crash out in the first round.

Mosimane said if the other Group A match, featuring France and Mexico in Polokwane on Thursday, ends in a draw, Bafana would have everything to play for in Bloemfontein.

That would mean both Mexico and France would have two points and Bafana one going into the last round of group matches. Uruguay have virtually qualified with four points.

“We have made life very difficult for ourselves, but having said that, we are not giving up. That is not our style. We qualified for the Confederations Cup [last year] with four points and the United States got through with three points after losing their opening two matches, and then got to the final.

Highly experienced
Mosimane said Uruguay showed why they are rated the 16th best side in the world.

“They are professional and highly experienced. We are 83rd in the world and inexperienced at this level and struggled against them.

“Losing our keeper [Itumeleng Khune] in the second half did not help our cause.”

Khune, who turns 23 on Sunday, was sent off by over-fussy Swiss referee Massimo Busacca for bringing down Alvaro Pereira in the 77th minute inside his penalty area.

Khune left the field in tears, as did most of the fans long before the final whistle had blown.

At that stage Uruguay were leading 1-0 thanks to a Diego Forlan first-half goal. Forlan took the spot kick, while Pereira rubbed salt into Bafana’s wounds by heading home the third goal with the last movement of the game.

Added Mosimane: “Now we have to fight hard against France and regain our pride and do everything possible to make sure we reach the second round.”

Parreira was furious at Busacca. However, for once the veteran Brazilian World Cup winner got his tactics wrong and Bafana suffered their first defeat in 14 matches since he took charge of the team for a second time.

He persevered with a midfield that did not work. Teko Modise has not matured and still has to learn that the World Cup is not the stage to showboat, especially when those tricks backfire with his side a goal down.

Steven Pienaar, who admitted he was struggling with fatigue after a tough season in the English Premiership with Everton, and Siphiwe Tshabalala did not get going.

Parreira persisted with a lone striker in Katlego Mphela, which was far too cautious for this match. He promised he would take risks but he failed to act on his pre-match promise.

The game cried out for a player like Siyabonga Nomvethe to come on in the second half and run at the well-organised Uruguay defence.

‘We are not out yet and we will fight’
But Parreira was optimistic and said France were not unbeatable. However, Bafana were brought down to size by the Uruguayans, and unless Parreira has a magic wand in his bag of tricks, Bafana’s World Cup journey will end in Bloemfontein before 6pm on Tuesday.

“We now face a cup final when we play France and believe me, the players are determined to put things right,” said Pienaar.

“We are pretty down but we know we have to pick ourselves up against France. We are not out yet and we will fight.”

Khumalo and his teammates claimed Pereira came from an offside position before the controversial penalty decision.

Said the tall central defender: “We thought the penalty should not have been given because a Uruguay player was offside. It was a harsh decision that hurt us badly.” — Sapa