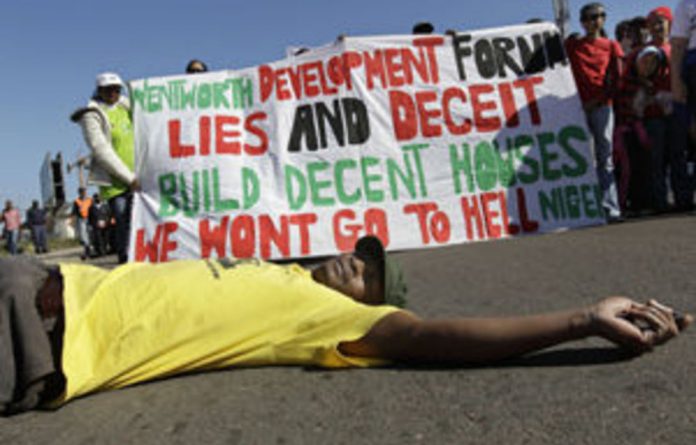 World Cup organisers faced protests at home and abroad on Wednesday as The Netherlands condemned “absurd” arrests over a marketing stunt and thousands of South Africans protested over the bill.

While the national side took to the field, South African authorities were accused of scoring an own goal by charging two Dutch women with ambush marketing over a stunt featuring dozens of fans wearing orange mini-dresses.

Campaigners also tackled the government over how it could spend hundreds of millions of dollars on staging the world’s most popular sporting event when an estimated 40% of the population live on less than $2 a day.

The Dutch government’s ire was provoked by the decision to charge two of its nationals over the stunt at a match on Monday, although a group of South Africans arrested at the same time were told they would not face charges.

The group were all wearing bright orange dresses which were sold with packs of Bavaria beer in the Netherlands in defiance of Fifa commercial regulations.

“It is absurd that the two women have a jail term hanging over their heads for wearing orange dresses in a football stadium,” Dutch Foreign Minister Maxime Verhagen said.

“If South Africa or Fifa wants to take a company to task for an illegal marketing action, they should start judicial procedures against the company and not against ordinary citizens walking around in orange dresses.”

In a statement, Fifa accused the organisers of the stunt of duping locals to take part, initially disguising them as Danish fans by covering up their orange dresses and then using decoys to divert the attention of officials.

Fifa said it was “appalled” that a company would expose “innocent people … to possible criminal charges and knowingly create unnecessary concerns for security staff and stewards, whose main focus should be safety measures”.

Meanwhile the national Bafana Bafana team faced pressure on the pitch as it carried the country’s hopes to beat Uruguay as fans filled the 50 000-seater Loftus Versfeld stadium in Pretoria.

The stadium was transformed into a sea of green and yellow, South African flags flying high with fans blowing the contentious vuvuzela trumpet but a small patch of blue from Uruguay supporters could be spotted.

‘Kowtowing to Fifa’
The South African government has frequently faced accusations of kowtowing towards Fifa, shelling out R33-billion on stadium and infrastructure projects for the World Cup.

At a march in Durban, about 3 000 campaigners vented their anger both over the cost of the tournament but also over the sacking of security staff.

“Get out Fifa mafia!” chanted the crowds in a Durban park, their ranks swelled by stewards who were involved in clashes with riot police on Monday after wage protests.

Monday’s demonstrations triggered walkouts by other stewards which have led South Africa’s police to take control at the World Cup stadiums in Cape Town, Port Elizabeth, Johannesburg and Durban.

“If we have money for stadiums, we should not have any homeless people or people having to live in shacks,” organiser Allan Murphy said.

Record earnings for Fifa
Fifa, which has made record amounts of money from the first World Cup to be held in Africa, has insisted the dispute over the stewards’ wages is not its responsibility, having sub-contracted the work.

The walkouts by the stewards, a wildcat strike by bus drivers and ranks of empty seats have combined to take the gloss off a largely triumphant opening to the tournament last week.

Fears of fan violence have so far not materialised, but authorities announced that 17 suspected Argentinean hooligans would be deported after a raid on school premises in Pretoria where they had been staying.

Another 11 Argentinean fans have already been deported for being known instigators of football violence after the Buenos Aires government gave South Africa a list of 800 known hooligans blacklisted from attending matches.

With all 32 teams now having played their first matches, organisers said around 110 000 foreign visitors had come to South Africa for the opening days. — Sapa-AFP