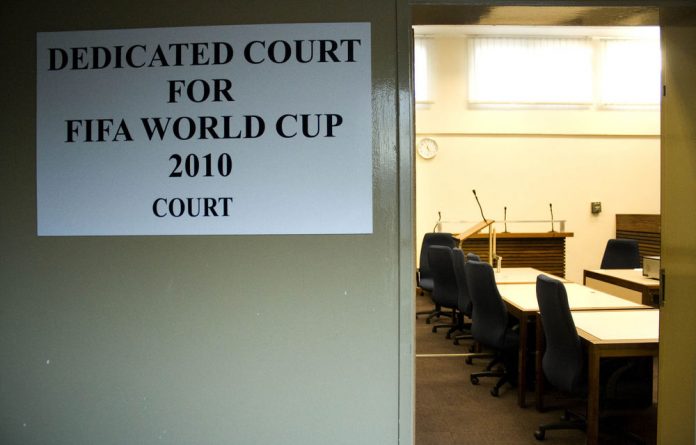 The Department of Justice’s dedicated World Cup courts, set up to fast-track justice during the tournament, have cost the taxpayer R1.75-million a conviction since their inception on May 28.

Tlali Tlali, the department spokesperson, told the Mail & Guardian on Wednesday that 19 cases had been brought before the courts so far, with eight convictions and two cases withdrawn. The department has allocated R45-million for the administration of 56 dedicated court rooms across nine provinces during eight weeks.

Based on a breakdown of the weekly cost of administering the courts (R5,63-million a week), the cost of the eight convictions secured since May 28 stands at R1,75-million a conviction. A total of 18 accused — four South African nationals and 14 others a “mixed bag” of foreign nationals — have been tried. These figures do not include the two Dutch women who appeared in a Johannesburg World Cup court this week for their involvement in what Fifa is calling “ambush marketing” by Bavaria brewery.

Dedicated courts are unprecedented in the history of the World Cup, Delia Fischer, the Fifa spokesperson, said. The courts had not been a Fifa requirement for the tournament but were a “commendable” initiative of the department of justice, she said.

The Magistrate’s Court Act (Act 32 of 1944) permits the minister of justice to “annex any district or any portion thereof to another district”.

In effect, the department has ­created space within existing court districts for dedicated World Cup cases to be heard.

The courts have resolved some high-profile cases speedily, such as the 15-year jail sentence handed down to two Zimbabweans within three days of their arrest in connection with the armed robbery of Spanish and Portuguese journalists at a Magaliesburg lodge.

But the majority of cases before the courts involve petty theft and, in one case, possession of dagga.

The Mail & Guardian visited a Johannesburg district court this week, where a door-stopper of an admissions book lay on a bench inside an empty World Cup court room. The book’s first five pages date back to the opening day of the tournament, each page allocated a day. Except for a line struck through each page with a red ballpoint pen, the book was blank.

The senior magistrate invited us into his office to watch the football on television, while he sat with his feet up on his desk, drinking Coke Lite and flicking between the latest FHM and a David Baldacci novel.

He did not preside over any cases for the duration of his eight-hour night shift, despite a World Cup match being played in a stadium less than a kilometre away.

Despite the inactivity at this and other dedicated courts, Tlali described the system as “a well-oiled machine”, adding that “the efficiency — which these courts continue to display must be commended and not condemned”.

Tlali said the courts would save time and money in the long run, because they were intended to “avert what could be [a] very costly and cumbersome exercise of finalising cases that involve non-residents”.

“It does not make sense to allow witnesses [or] victims who are in the country to return to their countries of origin and later invite them back or travel to where they are in an effort to have [their] cases — finalised,” he said.

Tlali said the department’s desire to finalise cases as soon as possible didn’t mean that those who appeared before the courts “have less rights than those who appear before normal courts”.

“We will not conduct ourselves in a manner that renders us complicit in violating the Constitution,” he said.

But Pierre de Vos, a professor of law at the University of Cape Town, said that the pressure to finalise cases quickly could lead to “police taking shortcuts in their investigations, which would actually slow cases down were they to be challenged in court”.

De Vos was surprised by the sentence handed down to the Zimbabweans for their involvement in the Magaliesburg incident: “When I read about their sentence in the newspapers, I thought, ‘Wow, that’s stiff’. It’s definitely in the upper band of prison sentences for armed robbery.”

Lawyers are available at all dedicated courts and 550 private practitioners and 150 Legal Aid South Africa representatives will provide free representation to those who cannot afford a lawyer.

But, in the absence of any World Cup cases at another regional court in Johannesburg on Wednesday afternoon, a group of translators spilled out of the icy corridors and headed towards the exit. The most pressing task during their eight-hour shift had been to try to keep warm.