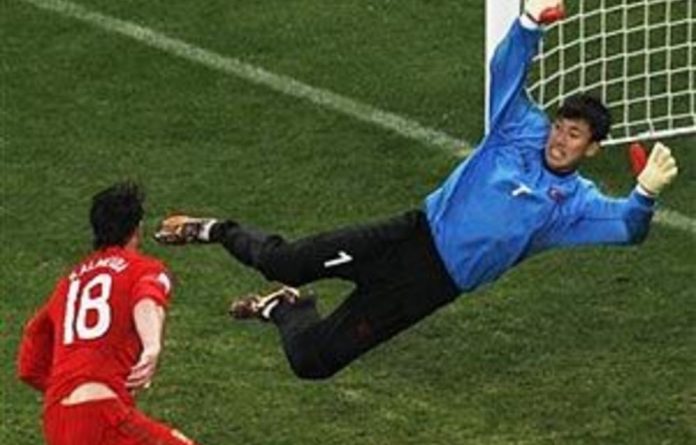 A merciless Portugal tore North Korea to shreds in a 7-0 rout on Monday, putting them within reach of the knockout rounds and eliminating the Asian nation from the Soccer World Cup.

With Brazil already qualified from Group G, Portugal now have four points to Cote d’Ivoire’s one, leaving Didier Drogba’s team with only an outside chance of making the round of 16.

North Korea have lost both their games and will head home after their last match against the Africans.

A Raul Meireles strike put Portugal in front with the Porto midfielder pouncing in the 29th minute. But it wasn’t all one-way traffic, with North Korea creating their own chances as they powered forward on the counter-attack.

The game changed, though, with three quick second-half goals from Simao, Hugo Almeida and Tiago that left North Korea shell-shocked before substitute Liedson banged in the fifth.

Captain Cristiano Ronaldo got the sixth, ending his two-year international goal drought, before Tiago made it seven.

Portugal coach Carlos Queiroz made four changes to the team that drew 0-0 with Cote d’Ivoire, with Tiago replacing the injured Deco, and Simao, Almeida and Miguel in for Danny, Liedson and Paulo Ferreira.

Ronaldo signalled his intentions by unleashing a long-range strike on two minutes that goalkeeper Ri Myong-Guk did well to collect.

Ricardo Carvalho also had an early chance, rattling the post with a header, as Portugal set about their task with vigour.

North Korea finally got a shot at goal on 10 minutes, with defender Cha Jong-Hyok whipping a 30-yard piledriver just past the upright.

As the rain returned, the Koreans started to look handy and far more aggressive than when they lost 2-1 to Brazil, surging forward to threaten the Portgual goal.

The Cholima were certainly not intimidated and could have taken a shock lead when captain Hong Yong-Jo’s shot was parried by Eduardo, only for Mun In-Guk to head the rebound over the bar.

The Portuguese came out after the break pushing hard for the second goal, which inevitably came on 53 minutes with Meireles slicing open the Korean defence with a pass to Athletic Madrid’s Simao, who slotted the ball past Ri.

North Korea were in disarray and let their guard down again three minutes later when Fabio Coentrao beat his man on the left and sent a lovely cross to Hugo Almeida, who made no mistake with a powerful header.

Portugal were rampant and the fourth goal came soon after when Ronaldo picked out Tiago in the box and he clinically side-footed home before Liedson volleyed in the fifth with nine minutes left.

Ronaldo made the most of a lucky bobble to get the sixth in the 87th minute before Tiago rubbed salt in the Korean wounds with a late deft header. — AFP