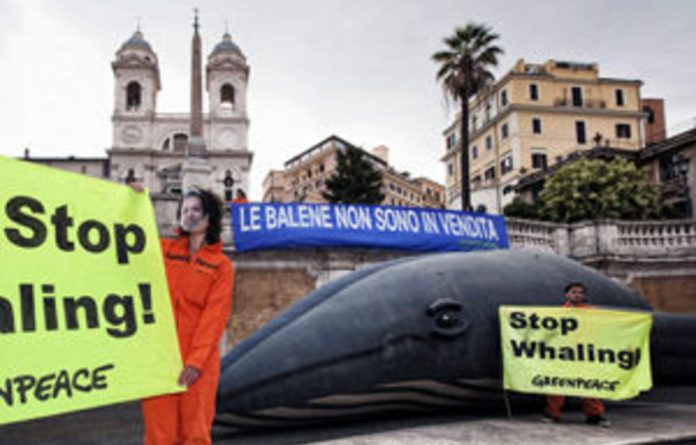 Plans to overturn the 25-year old global ban on commercial whaling in return for reducing the numbers of whales killed each year were in confusion on Monday, with governments and groups divided.

The 88 countries who are members of the International Whaling Commission (IWC) on Monday agreed to meet in closed session for two days in Agadir, Morocco, to decide whether to adopt a draft plan which would allow Norway, Iceland and Japan to legally hunt whales around Antarctica and elsewhere for 10 years in exchange for a gradual drop in the number killed.

The European Union, led by Britain, adopted a common negotiating position at the weekend which rules against the resumption of any commercial whaling. But the United States and New Zealand have continued to strongly back the package of measures proposed by the chair of the IWC.

Environment groups back proposal
In a move that took many people by surprise, three of the world’s largest international non-government groups, Greenpeace, WWF and the Pew Environment Group, today said they were prepared to see commercial whaling resumed if six conditions were met.

In a joint statement they demanded: an end to whaling in the Southern Ocean; an end to trade in whale meat and products; the elimination of unilaterally decided whaling quotas; an end to hunts of endangered whale species; putting science at the centre of IWC decisions and prevention of objections or reservations by IWC members if the moratorium is lifted.

“I urge the negotiators to take political risks to improve the current proposal, end the decades of IWC deadlock and bring it into the 21st century. The meeting in Agadir can and must save whales, not whaling industries reliant on bribery and embezzlement for survival,” said Junichi Sato, programme director of Greenpeace Japan.

But this was immediately rejected by many other environment groups including the Whale and Dolphin Conservation Society (WDCS) and the International Fund for Animal Welfare who said they were not willing to accept any return to commercial whaling.

“What kind of message does that give out to countries like Korea who used to whale? I urge Greenpeace to withdraw their position. They want to do the right thing in principle but more whales are killed in the northern hemisphere than in the south,” he said.

Greenpeace later clarified its position: “The global ban on whaling has got to stay in place. But the problem is that this whaling takes place outside the reach of the IWC. The only way to properly make the moratorium work is to bring commercial whaling under the reach of the IWC and then to enforce the ban,” said Sarah North, the group’s campaigns director.

Whaling kills up to 2 000 whales a year, including species on the verge of extinction. Since the ban was introduced 25 years ago, approximately 33 000 whales have been killed, according to the Animal Welfare Institute in Washington.

But there are fears that if no agreement is reached, the IWC as an organisation could collapse. The meeting in Agadir ends on Friday 25 June. — Guardian News and Media 2010

Campaign aims to stop ship strikes to save whales