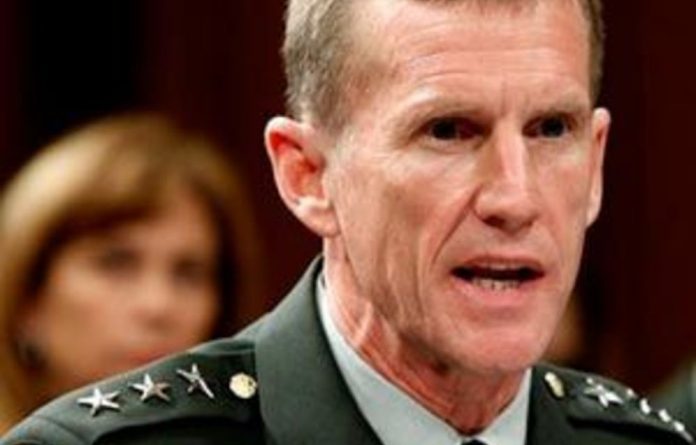 Barack Obama on Wednesday night sacked the United States and Nato commander in Afghanistan, General Stanley McChrystal, saying he had undermined the military’s accountability to civilian authority and the war itself with disparaging and contemptuous comments about senior administration officials to a magazine.

Obama said he was making a personnel, not a policy change, as he named General David Petraeus, the architect of the surge in Iraq, to take charge of the Afghan war in an attempt to reassure Americans that he retains confidence in the counter-insurgency strategy designed by McChrystal. But the crisis has laid bare personal and policy divisions within the upper echelons of those responsible for running the war and fuelled doubts in Congress and among troops on the ground in Afghanistan about the strategy.

Obama said he was left with little choice but to dismiss McChrystal.

“I don’t make this decision based on any difference of policy with General McChrystal, as we are in full agreement about our strategy,” the president said. “But war is bigger than any one man or woman, whether a private, a general or a president. As difficult as it is to lose General McChrystal, I believe it is the right decision for our national security.

“The conduct represented in the recently published article does not meet the standard that should be set by a commanding general. It undermines the civilian control of the military that is at the core of our democratic system and it erodes the trust that is necessary for our team to work together to achieve our objectives in Afghanistan.”

The White House said Obama spoke to David Cameron and the Afghan President, Hamid Karzai, about his decision to remove McChrystal.

Broadly welcomed
The president’s decision was broadly welcomed on both sides of the US political divide. One Republican senator, Lindsey Graham, said Obama had done the right thing because McChrystal had damaged the military by showing disrespect.

Mark Kimmitt, a retired brigadier general who served as assistant secretary of state under George Bush, said it was right for McChrystal to go. “The president lost confidence in his commander and no commander can serve if he doesn’t have the confidence of his president,” he said.

But the crisis has again focused attention on McChrystal’s strategy in Afghanistan and raised questions about how it will be pursued. Leading members of Congress have again questioned whether the war can be won, including the Democratic party leader in the House of Representatives, Steny Hoyer, who said he has “reticence on the probability of success”.

Kai Eide, who stepped down as UN chief in Afghanistan earlier this year, said the sacking was bound to have implications on the ground.

“McChrystal is the only person in the international community with unlimited access to President Karzai, and that is tremendously important,” he said. “He has not only been the face of the campaign but has been an inspirational leader who has rallied all troop-contributing countries. When that goes, of course that will have an impact. How can we pretend it won’t?”

Karzai appealed to Obama to keep McChrystal, calling him the best commander the war has had.

But Senator John Kerry said Petraeus’s appointment provided continuity. “[Obama’s] decision to return General Petraeus to the battlefield provides not just continuity in philosophy, but tested diplomatic skill that is at the very centre of a military strategy that hinges on progress in governance to sustain military gains. The strategy and the objectives must be the only agenda,” he said.

Obama forced McChrystal’s resignation because he said that while would tolerate debate on the war policy, he would not tolerate the kind of division created by the article — in which the general and his staff accused the US ambassador to Kabul of undermining the war, called the president’s national security adviser “a joke”, and mocked the vice-president, Joe Biden.

There was also indirect criticism of the president as “uncomfortable and intimidated” by senior military officials.

McChrystal left the White House within minutes of being dismissed at a short meeting and did not attend a conference of Obama’s Afghan policy team shortly afterwards, which included many of the people insulted by the profile in Rolling Stone magazine. The article prompted a frenzied debate about McChrystal’s future, underpinned by doubts among politicians and in the military as to whether the war can be won.

Obama had invested considerable trust in McChrystal by embracing his strategy and sending 30 000 additional troops to Afghanistan despite objections from many in his Democratic party and Congress.

Code of conduct
McChrystal, who was told he would not be permitted to return to Afghanistan, first met the Defence Secretary, Robert Gates, who has been a strong supporter of the general but found he could no longer defend him.

McChrystal issued a statement saying that he had resigned out of a commitment to “our coalition forces, our partner nations, and the Afghan people”.

The tone of Obama’s statement, with its emphasis on military accountability to civilian authority, reflected the growing view that if he did not dismiss McChrystal he would appear to be hostage to the military over what is now America’s longest war, with no end in sight despite a deadline next year to begin withdrawing troops.

“It is my duty to ensure that no division complicates the vital mission they are carrying out. That includes adherence to a strict code of conduct,” Obama said. “It is also true that our democracy depends on institutions that are stronger than individuals. That includes strict adherence to the chain of command.”

In the article, headlined “The Runaway General”, McChrystal’s aides are quoted as saying that he was less than impressed by Obama from the start. McChrystal mocks Biden, saying “Who’s that?” when his name comes up. — guardian.co.uk