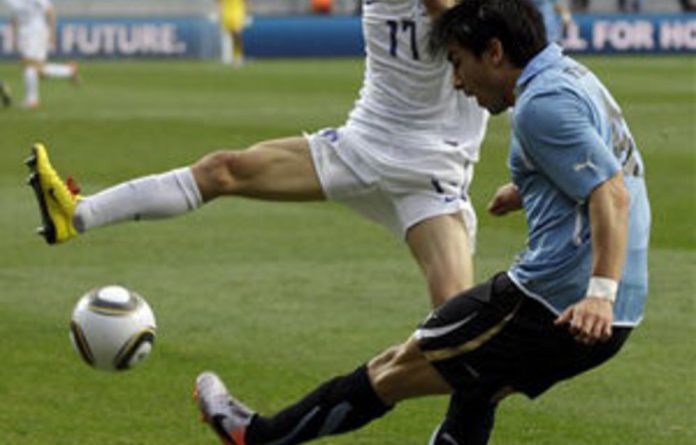 David Suarez scored a goal in each half to give Uruguay a 2-1 win over South Korea on Saturday and take them to the World Cup quarterfinals for the first time in 40 years.

Suarez netted in the eighth and 80th minute of a match that looked to be headed for extra-time to crush the Koreans’ dreams of reaching the last eight for the first time on foreign soil.

Edinson Cavani neatly curled the ball out wide to Forlan, whose low pass cut through the sleeping Korean defence to the unmarked Suarez, who side-footed into an empty net.

Park Chu-young had almost drawn first blood in a bright start for the Koreans when his fifth-minute curling free-kick from 20 metres struck the upright with the keeper beaten.

South Korea had most of the chances after that and came out fighting after the break. They went close through Kim Jae-sung, Park Chu-young and close to the hour mark Park Ji-sung’s header forced a save from Fernando Muslera.

The pressure finally paid off on 68 minutes when Lee Chung-yong headed a poorly-cleared free kick into the net from close range.

Their celebrations were shortlived though. With just 10 minutes of normal time remaining, Suarez picked up a loose ball and curled in a superb shot off the post.

There was still time for the Koreans to almost force another equaliser when Lee Dong-guk’s shot went through the keeper’s legs but lacked the power to cross the line. – Reuters