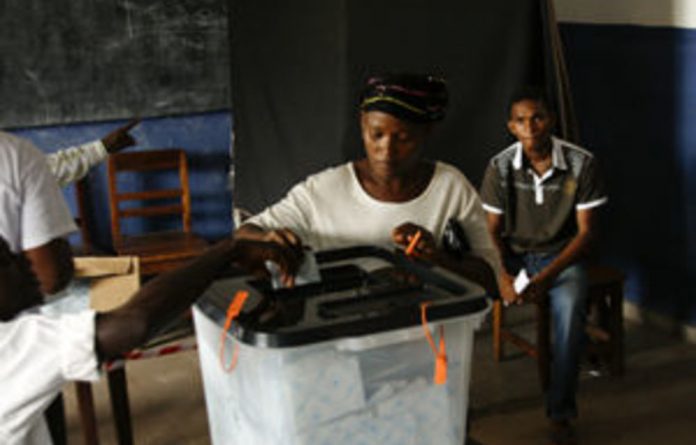 Guinea’s first free election since independence was met with praise and relief on Tuesday, but observers warned the days to come were crucial and urged leaders to accept the results.

The campaign chief of Cellou Dalein Diallo, one of the main candidates, meanwhile warned of “irregularities” since Sunday’s vote in two out of five Conakry constituencies.

Preliminary results in the presidential election are only expected on Wednesday but the first step in shaking off half a century of civilian and military despotism was hailed as “a renaissance”.

Turnout was reported to be massive among the 4,2-million registered voters, who chose a president from 24 civilian candidates.

‘A renaissance’
The editor of satirical newspaper The Lynx, Souleymane Diallo, told Agence-France Presse that the country’s first free vote since independence from France in 1958 was “a renaissance, an important step in the liberation of Guinea”.

“Up until now there had never been a proper election in Guinea. This is the first time it was impossible to know the name of the future president the day before the vote,” he added.

But Fofana Fode Oussou, who led the campaign of Cellou Dalein Diallo, one of the main candidates, alleged vote-rigging.

“We will not tolerate that they’re stealing our votes,” he told reporters whom he contacted late on Monday, speaking on behalf of Diallo’s UFDG party.

“Some neighbourhood chiefs and some heads of polling stations spent the night with the ballot boxes that disappeared and then reappeared,” he added.

Members of the CENI national election committee were not immediately available for comment.

The vote was “testimony of Guinea’s enthusiastic and inspiring embrace of democracy”.

“We urge all (…) to respect the outcome and work together.”

“It’s a great start, the beginning of a process,” Djinnit said.

“As Guinea awaits the results of the vote, the secretary general calls on all concerned to continue to respect their commitments to a peaceful process based on respect of the rule of law, and to accept the outcome,” his spokesperson said.

But in a joint statement they called on “all the candidates and their supporters to wait for the final results in the same atmosphere of calm and tolerance that prevailed during the election campaign”.

The poll comes after 50 years of dictatorship that started at independence in 1958 with president-for-life Ahmed Sekou Toure who ruled for 25 years.

His death led to a coup by General Lansana Conte who kept an iron grip on the country for 24 years until his death in 2008.

This was followed by a year of disastrous mismanagement by a junta of young officers led by Captain Moussa Dadis Camara that included a massacre of protesters against his regime.

Results trickling in
Results started coming in on Monday, with the announcement of preliminary results due on Wednesday and final results on Sunday at the earliest.

A second round of voting is planned for July 18 should no candidate take a clear majority.

The new leader will have his work cut out in a country that is one of the world’s poorest but has massive mineral wealth in bauxite and iron reserves. — AFP