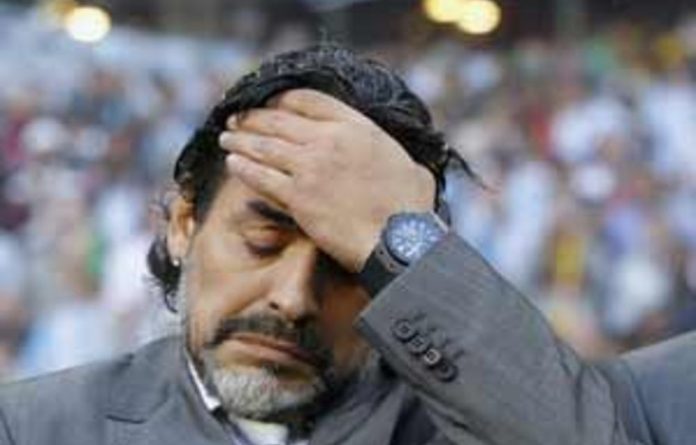 The Netherlands were warned not to underestimate World Cup semifinal opponents Uruguay on Monday, as South American heavyweights Argentina and Brazil continued to suffer the shockwaves from their elimination.

Dutch coach Bert van Marwijk has begged his players to keep their feet on the ground and ignore the hype as they carry the tag of firm favourites into a showdown with injury and suspension-hit Uruguay in Cape Town.

“It will be a very dangerous match. The euphoria at home is massive and maybe it is good that we are so far away and cannot witness it because we really need to focus on Uruguay,” said van Marwijk.

Veteran Uruguay coach Oscar Tabarez countered: “We are among the four best teams at this World Cup. This is something we would never have imagined before coming to South Africa. My players are united.”

Uruguay are handicapped by the loss of striker Luis Suarez, barred after his red card for a deliberate goal-line handball that prevented Ghana becoming the first ever semifinalists from Africa.

Netherlands right-back Gregory van der Wiel and holding midfielder Nigel de Jong miss out after picking up second yellow cards of the tournament in the come-from-behind triumph over Brazil.

“This team, it is the masterpiece of Joachim Loew. He has placed his mark on its make-up and created a perfect team,” said Beckenbauer, a World Cup winner as a player and a coach.

Germany were boosted on Monday when midfielder Sami Khedira was passed to play after suffering a thigh injury in the 4-0 quarterfinal demolition of Argentina.

Veteran Barcelona defender Puyol had to go off in the 84th minute of the 1-0 victory over Paraguay in the quarterfinal after suffering blurred vision while Fabregas fell heavily on his shoulder.

Argentina coach Diego Maradona hinted he may resign as he returned home following his side’s elimination, according to a report from Argentine cable channel Cronica TV.

Uncertain future
“That’s it, my cycle has finished,” Maradona reportedly said. “I gave all I had.”

Luis Segura, president of Maradona’s formative club Argentinos Juniors and a close friend of Argentine Football Association (AFA) president Julio Grondona, said that it was up to Maradona to decide on his future.

“The person who’ll have to decide if he continues or not is Maradona,” Segura told TyC sports channel.

“It depends on him. But Grondona has never interrupted a [national coach’s] contract and if Diego decides to continue, he’ll continue.”

Scolari won the World Cup with Brazil in 2002 and despite his insistence he will see out his contract with Palmeiras, he remains the favourite to replace Dunga, who was sacked after Brazil’s quarter-final loss to Holland.

Nigerian government sources said on Monday that a two-year ban on their national team after a dismal World Cup had been lifted.

The country’s President Goodluck Jonathan ordered the ban last week as anger engulfed the huge west African nation after the Super Eagles managed one point from three matches in one of the easier first-round groups.

World football rulers Fifa reacted by telling Nigeria to lift the ban by Monday or the Nigerian football federation would be suspended, effectively cutting the country off from all international and continental competition. — AFP