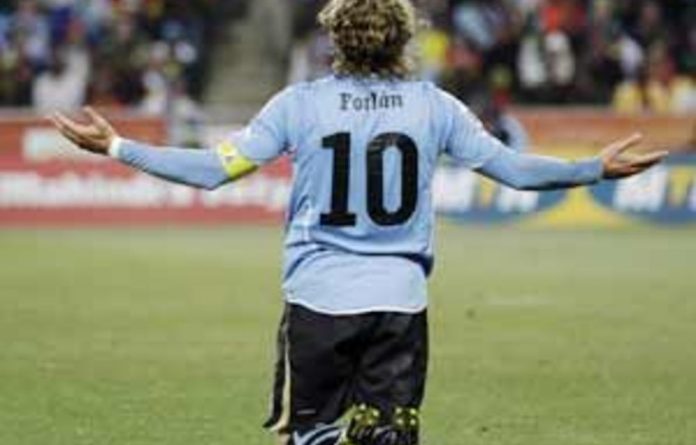 To the uninitiated, Diego Forlán sneaked into South Africa masquerading as just another faceless, anonymous footballer seeking fame and fortune at the Soccer World Cup.

Yet, after inspiring Uruguay to the semifinals, Forlán can now be confident he ranks among the more recognisable faces among all Africans. The Atletico Madrid striker has become Public Enemy No. 1 after rubberstamping his status as the scourge of African football against Ghana.

Forlán, with trademark Alice band in place, pricked the bubble of optimism that surrounded a nation with a well-taken brace that fuelled Uruguay’s 3-0 win over South Africa.

Most South Africans would have happily had him deported after that demolition job. The immigration authorities didn’t oblige, and last Friday, Forlán repaid their omission with interest.

Ghana faced Uruguay comfortable in the knowledge that they had become the adopted nation of choice for all disillusioned Bafana Bafana fans. The Black Stars were expected to avenge South Africa’s 3-0 defeat by putting the team which annihilated the hosts to the sword. Local parliamentarians urged Ghana make a continent proud; President Jacob Zuma recorded a message of support and even former president, Thabo Mbeki deconstructed his aloof image to wish the Ghanaians well.

In a final show of solidarity, the local press and fans renamed Ghana Bafana Ba-Ghana.

None among all these well-wishers though had reckoned with Forlán. True Ghana took the lead against Uruguay in the first half, but the intake of breath among fans every time Forlán was on the ball though was revealing.

The 31-year old might be a hit-man of some repute at club level. But at this World Cup, Forlán has redefined himself as a deep-lying forward who forages for balls in the hole; then utilises his speed and cerebral movement to terrorise backpedalling defenders. It was by falling deep that he created space to open the scoring against South Africa with a shot from distance.
And it was from similar positions that he turned into Ghana’s tormentor-in-chief in the first half.

Against Ghana, Forlán had to wait till the 55th minute to see his sweat and effort reap dividends. But when his goal came, there seemed to be an air of inevitability around it.

John Paintsil was lured into a reckless foul by the marauding Jorge Fucile; Forlán stood imposing over the free-kick and one majestic swing of his right foot later, Uruguay had equalized.

Success was never in doubt and as the commentator so succinctly remarked: “Without Forlán, Uruguay would perhaps not have reached this far.”

He should have added that: “Without Forlán, African hopes would perhaps still be alive and kicking.”

After the ruthless manner in which Forlán has treated South Africa and Africa at large, whichever immigrations bureaucrat let Africa’s scourge into the nation must surely get charged with dereliction of duty and have his contract terminated with immediate effect. — TwentyTen