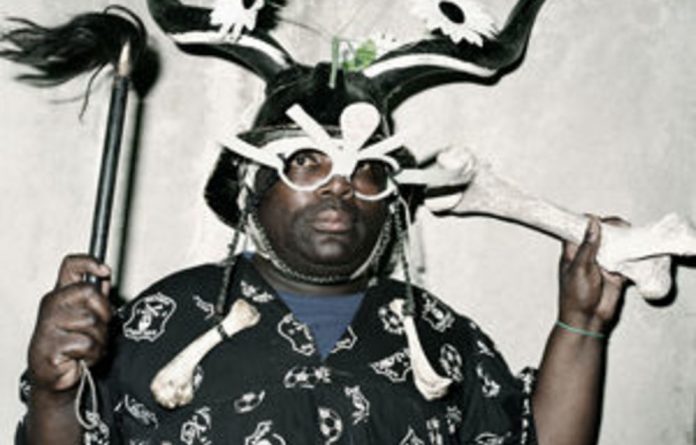 Halakasha! is the celebratory cheer that goes up when a goal is scored during a South African football match. Halakasha is also the title of the African soccer art exhibition at the Standard Bank Gallery. It brings together photographs, paintings, film and carvings of the beautiful game.

The photographs go further than a mere documentation of South African football history. Also presented are pictures from Drum magazine featuring the likes of Oliver Tambo and Yusuf Dadoo (on the ball) and documented images of the game elsewhere in Africa. There is an overweight Idi Amin limbering up with his football team, Kwame Nkrumah addressing his Black Stars from a different age and a young Carlos Alberto Perreira wearing very tight shorts coaching football in Ghana back in 1968.

It is not only leaders who are captured on silver gelatin prints. There are photographs picturing the townships at play — and the security police with their German shepherds watching them. There is one great shot of the Mother City Girls, a women’s football team in the early 1960s, scrambling for the ball, with one woman going for a header wearing a distinctive headscarf. Images like this could come only from South Africa.

A series of vibrant recent photographs by Antony Kaminju are especially resonant. Kaminju, a Kenyan, has captured Kaizer Chiefs and Orlando Pirates fans in all their match-day glory. What really stands out are his photographs of Long John Silver, a collector of pirate-themed paraphernalia, celebrating the Pirates team and Johannes “Mzion” Mofokeng. This famous Pirates’ fan has a shrine in his home where he prays to his ancestors before a game.

No examination of African football would be complete without looking at the role and influence of muti in football culture. Halakasha‘s curator, Fiona Rankin-Smith, has included photographs of men dressed in women’s clothing and brandishing the flywhisks used by sangomas when they are divining. She even negotiated a loan agreement with a sangoma for muti that is used to win matches, which she has put in display cases. And so we have a situation in which muti meets art.

Staying with the supernatural, the show also includes artist Penny Siopis’s look at homespun taboos, particularly her work on the Pinky Pinky character that plays on children’s fears.

About Siopis’s Pinky Pinky Ronaldo screenprint, Rankin-Smith noted last week in an interview: “Pinky Pinky is like a tokolosh. He’s a scary thing that hangs around the toilets and creeps up on you when you go to sleep. He’s like a devil, but no one really knows what he looks like and he’s very ugly.”

This is one of a series of works by Siopis involving the Pinky Pinky character and, in this instance, depicting Ronaldo’s silly hairstyle from the 2002 World Cup.

Hair is a theme that crops up elsewhere in the exhibition, with lively barber signs by a Ghanaian artist, OA Heavy Teshie. These signs offer the customer a choice of haircuts in the style of their favourite footballer. With a Samuel Eto’o crop or a Didier Drogba Afro-mullet or a Christiano Ronaldo cut, you, too, can be just like one of them.

One particularly novel inclusion is an installation by two art students, Rodan Kane Hart and Murray Kruger. This takes the form of vuvuzelas cast in cement set in a glass display case alongside bits of broken ones, with a sign saying: Silence.

“They played with notions of [the work] being like a find from some sort of excavation. You can interpret it how you like, but I do know they were interested in commentary on the ready-made, like Marcel Duchamp,” says Rankin-Smith.

Another intriguing item is the series of montages by Thomas Mulcaire involving the re-framing of pages from a magazine titled South African Soccer, dating back to the Seventies and Eighties. The magazines caught Mulcaire’s imagination when he looked back at them 20 years later. He says that, in their time, they “managed to transcend this daily reality [of apartheid] and for some reason also escaped the legislation and boycotts of the time”.

In the gallery setting the pages of the magazine are elevated above their status as mundane items of the every day.
There are watercolours by Durant Sihlali of children, playing in Kliptown in the 1990s, and by Gerard Bhengu, documenting the all-white colonial game in the 1920s.

And no exhibition on South African football would be complete without the makarapa headgear worn by local fans. The makarapas provide colour and a central focus, grounding the exhibition firmly in the grandstand.

Halakasha includes the official art posters of the Soccer World Cup, including William Kentridge’s bicycle kick and Kay Hassan’s Swanker Ball. These Fifa posters have been well conceived, have real beauty and are intended to be high-end souvenirs of the event. But the prices they are being sold for by some local galleries are simply outrageous. As investor items it is clear that buyers will need to wait a long time if they are to get any return on what they pay for them.

There are old football boots from Pele, Maradona and Eusebio, as well as other historic football items such as the constitution of the Robben Island FA and the badges of the prison teams. According to some accounts, Jacob Zuma was the league’s referee.

As far as the traditional approach to art production goes, there is a fantastic selection of football-themed woodcarvings. Of these, the late Jackson Hlungwane’s Hand of God must be the most important work on show. This reflects the artist’s love of football and — with his Christ Putting His Right Foot Forward and carvings by Nelson Mukhuba — forms a type of altar in the landscape of the exhibition. The only shame, here, was that the exhibition didn’t include Hlungwane’s Christ Playing Football. For that, one will need to make the short trip across town to the Johannesburg Art Gallery — and maybe that in itself is a good thing.

This landmark exhibition is, in my view, an essential part of the football festivity taking place. And it provides an ideal way to explore the ways football has seeped into the popular consciousness.

Halakasha runs at the Standard Bank Gallery until July 17

Dark forces at work in Amsterdam

South African artist Ruan Hoffmann's recent residency at the Thami Mnyele Foundation in Amsterdam was an opportunity to get away, for a while.
Read more
Friday

Face to face with the new Afrikaner

Musician Baaba Maal speaks to the M&G about 'Africa Utopia', a series of talks, concerts and events he is curating in London ahead of the Olympics.
Read more
Friday

Although quite tight-lipped about the details, the gallery wants to create an inclusive history of art.
Read more
National

Art as an Olympic event

A South African artist chose the workers as his subjects during his residency at London's Olympic Park.
Read more
National

Institution faces a funding crisis that could result in ­priceless works in its storerooms getting damaged.
Read more
Advertising
Continue to the category
National