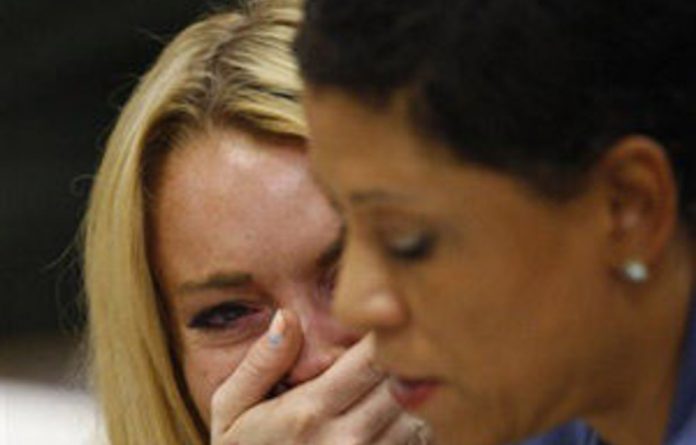 A distraught Lindsay Lohan was sentenced to 90 days in jail on Tuesday after a judge ruled that she had violated her probation by missing a string of alcohol education classes imposed for a 2007 drunk driving arrest.

Beverly Hills Superior Court Judge Marsha Revel ordered the Mean Girls star to report for jail on July 20. She also ordered Lohan to attend a 90-day residential substance abuse programme once she has completed her sentence.

Lohan (24) whose once promising movie career has foundered in recent years, sobbed loudly on hearing the sentence. Earlier, she tearfully begged the judge for another chance saying she was taking her alcohol education classes seriously.

“I am not taking this as a joke. This is my life. It is my career. It is something I have worked for all my life,” the actress pleaded.

But judge Revel’s court heard otherwise. Lohan, who did three stints in rehab in 2007, missed seven alcohol education classes over the past six months and had not attended her meetings once a week, as clearly instructed by the judge.

“I did the best I could to balance jobs and showing up,” Lohan told Revel, her voice croaking with emotion. “I was working … I was working with children, I wasn’t taking it as a joke … I wanted to come back and make you happy.”

The alcohol education classes were imposed for two, 2007 drunken driving and cocaine possession arrests. Lohan spent 84 minutes in jail in that year as part of her sentence and was given three years probation.

No more chances
Last October, her probation was extended for a year after the actress used what prosecutors termed “very creative” excuses for missing several earlier classes.

“After all that, she does not comply with the court’s order and the court does find her in violation of her probation,” Revel said on Tuesday. “I couldn’t have been more clear, and it wasn’t done … It is like someone who doesn’t think it’s cheating unless she gets caught.”

Lohan is not expected to serve the entire sentence, however. Los Angeles Sheriff’s Department spokesperson Steve Whitmore said non-violent women generally serve 25% of their term, and there could be more time off for good behavior and programmes to ease overcrowding in local jails.

Judge Revel had earlier declined to address an alert sent out in June by the alcohol monitoring device Lohan was ordered to wear in May after missing a hearing because she claimed she had lost her passport while at the Cannes film festival.

Lohan protested via Twitter at the time that she had not been drinking. A request by Lohan on Tuesday to have the Scram monitoring device removed for her remaining two weeks of freedom was dismissed by the judge.

Lohan’s lawyer pleaded for leniency, saying the actress had made up the missed classes and had complied with all the other terms of her sentence.

“She has done far more than she has not done,” lawyer Shawn Chapman Holley said. “You woke her up, you got her attention, she is juggling a lot of things … but in the end she got it right.”

Prosecutor Danette Meyers countered that Lohan had been given enough chances, saying; “Not once, but seven times, she has not complied with this court’s order … The court is clearly irrelevant to her.”

Lohan found fame as an 11 year-old in the movie The Parent Trap and was considered one of Hollywood’s most talented young actresses.

Her career peaked during the 2003 and 2004 movies Freaky Friday and Mean Girls. But by age 20, Lohan was already attending Alcoholics Anonymous meetings and her hard-partying lifestyle was being chronicled by celebrity websites.