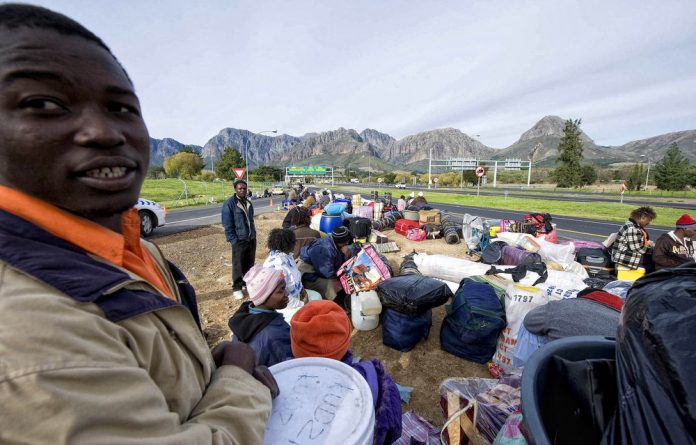 “I don’t know how many people lifted me off my seat and threw me off the train,” said Reason Wandi, a traumatised 26-year-old Zimbabwean. “There were more than 10 people who surrounded me, calling me a makwerekwere [a derogatory term for foreigners] and telling me to go home because we were taking their jobs.”

Wandi was thrown out of a moving train just outside Cape Town on Tuesday morning. He was taken to a railway police station at Bellville, where staff called an ambulance to take him to hospital and, inexplicably, wrote in their records that he had fallen off a train.

The Mail & Guardian spoke to Wandi as he was leaving Tygerberg Hospital on crutches, battling with two fractured ankles. Shaking and still clearly in shock, he said he had no idea where he was going to stay as he did not want to return to his home in Khayelitsha.

“I have cried a lot in the hospital, but I try to be strong when I speak to my wife, who is working in Port Elizabeth. I am happy I was not killed because I have to lay the foundations for my four-year-old son,” he said. “I just keep remembering the voice of the Rasta man on the train who told them not to hurt me and it gives me some hope that someone was prepared to speak up.”

Wandi has no job and he had his last R60 and his curriculum vitae in his backpack when he set off at 6am to look for work. Nobody tried to rob him, he said, but there were many witnesses to the fact that a mob tried to kill him.

Although Wandi had not laid a charge, police spokesperson Captain Fienie Nimb said he could still do so if he wished to. Nimb said she did not know why the railway police had recorded that Wandi had fallen from a train.

Laticia Pienaar, Tygerberg Hospital spokesperson, said six men who had been admitted to the hospital this week were believed to be victims of xenophobic attacks. Three were assaulted, two were shot and Wandi had been thrown from a train.

Fidel Radebe, National Department of Health spokesperson, said that he did not know of any victims of xenophobic attacks being admitted to other hospitals.

But many foreigners were taking no chances and assembled on the N1 near Paarl this week in an attempt to get a lift to Johannesburg. All who spoke to the M&G on Wednesday said they were planning to catch a bus from Johannesburg to their homes.

A man who was sitting on a suitcase beside his pregnant wife and children did not want to speak about it. His mountain of goods included a fridge and other household appliances. “Why should I talk to you?” he asked. “I have been sitting here for three days waiting for a lift. The more journalists come here, the more police arrive and the fewer trucks stop to offer us lifts. And I have been told the xenophobia has already started. Please go away.”

Congolese John Sithole said he had been living in the poor rural township of Mbekweni in Paarl.

“People have been talking shit to us for weeks now. They say they are going to kill us after the World Cup,” he said. “I’ve been working here, doing some painting work since 2008. But I’m not coming back.”

An exhausted group of Mozambicans, who asked not to be named, said they had been waiting for a lift for three days.

“We all live in different areas. We have all been threatened. It sucks staying here,” said a Mozambican, who did not want to be named. “How can they can turn on us like wild animals? We’re not coming back.”

An unhappy provincial traffic chief, Kenny Africa, was stationed with his team beside the N1, monitoring the situation, which he described as “unhealthy”.

“It is really unsafe for little kids and old people and there are no toilets. A child could run on to the N1 while playing,” he said. “I want Disaster Management or the City of Cape Town or Paarl Municipality to help to do something. I am hoping they can provide buses for them.”