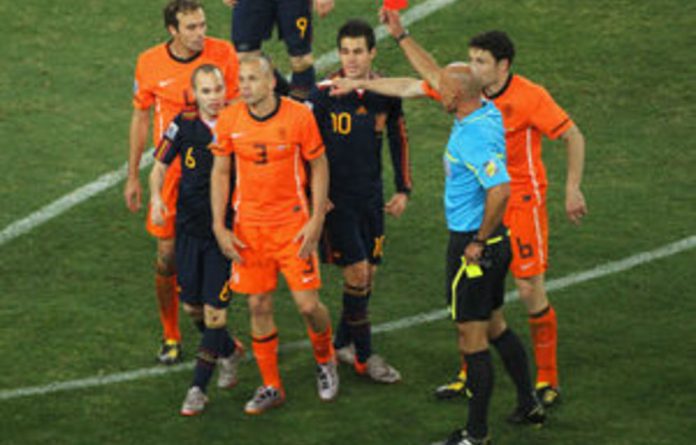 Spain lifted their first ever World Cup after a largely forgettable affair in which Holland had John Heitinga dismissed in extra-time for a second booking while seven others were yellow carded in a niggly affair at Soccer City.

And as the Dutch tried to hold out, Iniesta struck to condemn The Netherlands to their third World Cup final defeat in three appearances.

But Robben was incensed when seven minutes from normal time Carles Puyol escaped punishment when he seemed to impede the Dutch flyer as he raced in on Iker Casillas’s goal.

Puyol appeared to use his arm to hinder Robben’s flow and Casillas came out to block the striker, who had gamely tried to remain on his feet.

“As a player, you always try to keep going, but for them to score a goal [four] minutes before the end was tough. It made things very difficult for us,” said the Bayern Munich star.

“We kept trying to get something out of the game, but the dressing room was a pretty depressing place.

“We sat there in the dressing room and only talked about some of the refereeing decisions.

“There were a few things which were hard to take, but there is no point talking about them now.”

Puyol had already been booked at that point and had Webb adjudged him to have fouled Robben, then a second yellow would have been brandished, given he was the last man and Robben was through on goal.

De Jong, who was shown only a yellow card when he jumped up, studs showing, and caught Spain’s Xabi Alonso in the chest, said he felt the major calls went the Spaniards’ way.

Just before Spain scored, Holland should have had a corner when a Wesley Sneijder shot was deflected behind.

But a goal-kick was given and Spain went straight up the other end to snatch the winner.

“There were a few curious decisions in the game, but that is football,” moaned De Jong.

“You have to keep going and keep fighting, but it was hard. Webb made some curious decisions, especially the last bit from Spain, it was a corner for us, as Spain had deflected the ball, but we didn’t get the decision.

“It is always easy to blame the referee, but we didn’t control the game.

“These are important decisions which didn’t go our way, but that is just the way it goes.

“It has been a long season and we have learned from the experience.”

However, De Jong did not lay all the blame at Webb’s door.

“Nowadays the pressure is so great for the referees, they are told what to do by Fifa,” he added, before defending the rough nature of the game.

“It is a final, so everyone did everything they could to win no matter what, it was the same for both sides, we had some fouls, so did they. This is your once in a lifetime opportunity.

“Football is football, maybe I am a little old school, but I remember the games back in the days when there were worse fouls which never even got booked.” — AFP

Ryland James
AFP sports journalist based in Berlin, tweeting about Fussball, Germany, die Mannschaft, Champions League and the Bundesliga. Views my own.