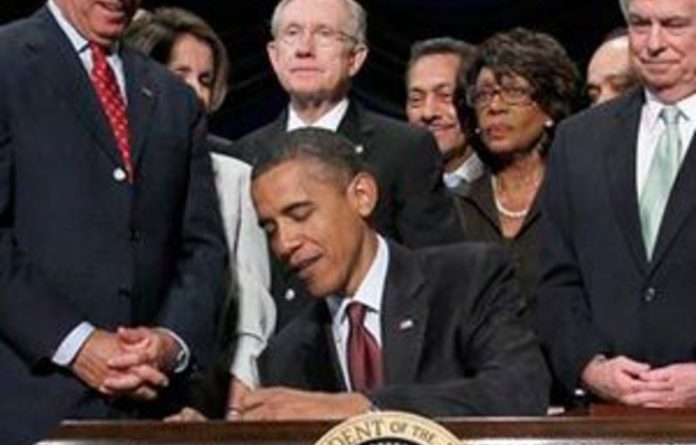 President Barack Obama signed into law on Wednesday the most comprehensive financial regulatory overhaul since the Great Depression, vowing to stop the risky behaviour on Wall Street that imperilled the United States economy.

Influential business groups lined up to criticise the new law, underscoring Obama’s uneasy relationship with America’s business community. Some on Wall Street, however, welcomed the clarity offered by the law after months of wrangling in Congress over what should be in the legislation.

The law, which got final approval from the Senate last week, targets the kind of Wall Street risk-taking that helped trigger a global financial meltdown between 2007 and 2009, and also aims to strengthen consumer protections.

Obama, facing voter unrest over Wall Street bailouts that have failed to spark a strong Main Street job recovery, pledged taxpayers would never again have to pump billions of dollars into failing firms to protect the economy.

“Because of this law, the American people will never again be asked to foot the bill for Wall Street’s mistakes,” Obama said at a signing ceremony attended by some Wall Street bankers, business leaders and lawmakers.

“There will be no more taxpayer-funded bailouts. Period.”

With Republicans poised to make gains in the November congressional elections, Obama’s Democrats are eager to show voters that they have taken steps to tame an industry that dragged the economy into its deepest recession in 70 years.

Obama and the Democrats have yet to gain political traction from the legislative victory, with Americans still anxious about a 9,5% jobless rate and ballooning deficits.

The financial regulatory reforms were a major achievement for Obama and his ambitious domestic agenda. Earlier this year he signed into law sweeping reforms of the US’s $2,5-trillion healthcare system.

‘Unscrupulous’ lenders
Obama had harsh words for “unscrupulous” lenders and others he said had taken risks that endangered the economy. He said the new law was aimed at curbing abuses and excesses on Wall Street and stopping taxpayer bailouts of failing companies.

The law would provide certainty “to everybody from bankers to farmers to business owners. And unless your business model depends on cutting corners or bilking your customers, you have nothing to fear from this reform,” Obama said.

The US Chamber of Commerce, an influential business group that often criticises Obama’s economic policies, said it would have the opposite effect.

“Such a broad, sweeping Bill epitomises a law with unintended consequences that creates more uncertainty for American businesses,” said Thomas Donohue, president and CEO of the chamber.

The American Bankers’ Association expressed disappointment with the legislation, saying it “contains a tsunami of new rules and restrictions for traditional banks that had nothing to do with causing the financial crisis in the first place”.

Much of its impact will depend on how it is put into practice. Bart Chilton, a commissioner with the US Commodity Futures Trading Commission, said the law boosts transparency and gives regulators better tools to regulate markets, but many questions remained to be answered.

“This is a wide-ranging Bill with many facets, hundreds where regulators still need to put some more meat on the bones. How we do that, and when we do that, are questions that will really tell if this legislation meets the expectations of its supporters,” he said.

Clarity
Ruth Porat, chief financial officer of financial giant Morgan Stanley, which on Wednesday reported higher-than-expected second-quarter profits, said the company was pleased to see the Bill signed as it put “some clarity around the issues”.

The legislation targets potentially lucrative trading in risky over-the-counter derivatives and aims to force banks to end trading for their own profits.

It creates a Consumer Financial Protection Bureau to regulate products ranging from credit cards to mortgages. The administration considered this one of the most critical parts of the Bill but banks fought it bitterly.

The legislation closes loopholes in regulations and requires greater transparency and accountability for hedge funds, mortgage brokers and payday lenders, as well as derivatives.

However, much of the financial reform Bill, like the healthcare law, will take time to implement and so may not help Obama’s political plight for months.

For instance, it will be up to a year before the new Consumer Financial Protection Bureau is set up to protect American consumers from hidden fees and deceptive lending practices when they get a new mortgage or credit card.

It could be 18 months before new regulations emerge to stop banks from engaging in impermissible proprietary trading and investment in hedge funds under the Volcker rule, named after former Federal Reserve chief Paul Volcker.

In a bid to highlight the help the Bill will grant to the middle class, Obama was joined at the signing ceremony by several Americans who suffered unfair treatment at the hands of credit card firms and banks.

Obama received repeated ovations during his speech and one round of applause was reserved for his praise of three Republican lawmakers who broke ranks with their party to vote for the legislation. — Reuters, AFP