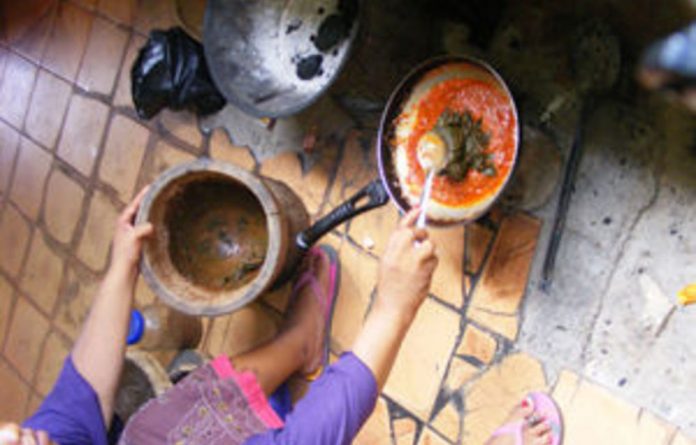 The way to gastronomic heaven is paved with about two kilograms of rice, a kilogram of fish, onions, green peppers, tomato paste, seasoning and herbs. That heaven is called tcheip djenne.

Impatience is what happened at lunch time, at the house where I was staying in Bamako, Mali, last year.

About 10 of us circled the empty plastic table like vultures waiting to feed. At intervals we would cast our eyes to the kitchen, where two large metal dishes teased us with their contents: a feast taking its time getting to the table.

Adama, a Togolese man, opened his leather pouch, jiggled it and took out a set of cowrie shells. People lined up to have their fortunes told. The stories were familiar: “Plenty of money soon, a husband or wife would materialise, or children and long life.”

French art student Dorianne rubbed the heat-induced nap from her eyes and asked if lunch was ready.

“No,” we chorused, and told her to join us in doing anything — to dance, tell fortunes, model new outfits — to keep us from withering with anticipation.

We kept our eyes on the food.

The cook procrastinated, doing sweet nothing. I think I could see her laughing at us while we awaited our trip to the gastronomic heaven otherwise known as tcheip djenne.

It is punted as the national dish of home-cooked meal-loving Senegal.

On paper, it is just rice, fish and veggies in a tomato stew but, to the taste buds, it’s possibly the most delicious one-pot cooked meal.

The basic ingredients used are dried chilli, black peppercorns, garlic, chicken stock, parsley and celery leaves. I am not saying other nations have not produced fine cuisine, it’s just that tcheip makes other rice dishes taste like cardboard.

Asstou, the cook, warned that tchiep, “is not child’s play” on the morning that I announced I would trail her to the marketplace, and around the kitchen, to learn how to cook this champion of one-pot dishes.

West African meals are prepared from scratch, starting with a trip through the blazing sun to the market. Here, we waded through and sifted produce to find our ingredients. Asstou took her time, having her pick of shrivelled cabbage, mud-covered sweet potatoes and tiny bunches of carrots.

From the outset, tcheip can be made with vegetables of varying quality and the dish can be adapted according to what’s available.
Our next stop, at the market, was the coal shop where we bought coal from an elderly trader called Ousmane. His son’s coal-stained hands were proof that West Africa still believes in inherited occupations.

When we finally got home, Asstou gutted and cleaned the fish. I lit the fire and fanned the brazier until the coals were red. Asstou hauled out her ancient mortar and pestle and she ground a little chilli, some peppercorns, parsley and celery leaves. All this was used as stuffing for the fish.

The half-a-dozen white-fleshed fish were popped into a large old pot for deep frying. Once done, they were scooped out of the pot to make way for chopped tomatoes, a cube of chicken stock and a litre of water.

Peeled carrots were added with whole chunks of cabbage — stems in tact — and sweet potatoes.

Asstou sifted the rice and gave it a quick rinse before leaving it in a metal sieve, which she placed atop the cooking pot, for par-steaming. Deftly, the old woman sealed the space between the sieve and the pot with a thin strip of cloth.

A short while later she dumped the rice into the dish in which the the vegetables were cooking. At length the rice absorbed the juices and flavours of the veggies.

The fish was returned to the dish and Asstou served it to her guests from large communal dishes.

As a side dish, any Senegalese cook worth her salt will serve bissap (hibiscus) leaves, which are boiled until soft, then ground with dried chilli and pounded vigorously.

The morogo-like mix is popped into a pan sizzling with oil and tomato paste. It then simmers and is stirred for a few minutes.

To make guests squeal with delight, the entire meal is washed down with the traditional ginger drink known as nyamaku. For this, the cook will scrub and then grate fresh ginger, adding water and chopped mint to the mixture. The ginger is squeezed until it loses all its flavour to the water, sugar is added — tons of it in West Africa — and sometimes vanilla or fruit cocktail essence is thrown in with a dash of lemon juice. Nyamaku is, quite obviously, served chilled.

Tcheip, by reputation, is served regularly in French-speaking West Africa. Its popularity has ensured a space for variation and, when the same recipe is followed without tomatoes (or tomato paste), cooks refer to it as tcheip blanc.

This dish is so irresistible that an unfortunate Spanish woman called Miriam — who was pregnant and had malaria — swore that it was the thought of this mouth-watering dish that lured her all the way back to Mali from a village in Guinea where all she ate was rice and beans. It’s that damn tasty!