From the house on Douglas Lane 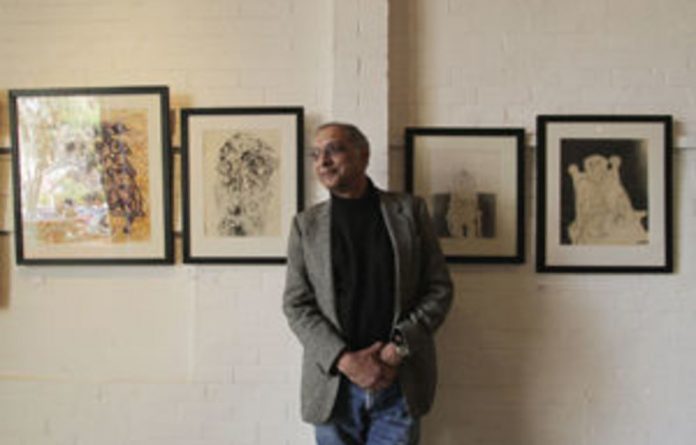 This is not where the story begins, but it is where I’ll begin: 1949 in the Grey Street complex, Durban — the area also known as Coolie Town or the Casbah. It is the year of the Durban riots, when 142 people will lose their lives in a weekend of violence. Omar Badsha is four years old.

On a Friday afternoon after mosque, a brick is thrown through the window of Badsha’s house on Douglas Lane. It is the house where Badsha’s family has lived since 1917. In the backyard of the house is an umdoni tree, planted by Badsha’s grandmother.

The lounge, which is also a bedroom, doubles as an artist’s studio for Badsha’s father, Ebrahim. Some nights, many nights, the lounge becomes a place for people to meet; a place where writers, artists and political activists can get together and talk. Later, when the community is under siege and people go into hiding or into exile, banned activists still come together to meet and talk at the house on Douglas Lane.

This is where Badsha grows up, with the memory of a brick coming through his window and with art and politics in his blood.
Later Ebrahim gets called in to his son’s school because Badsha decides he wants to go to art class rather than the compulsory religious studies for Muslim students. Ebrahim says that his son has the right to decide what he wants to do — and what he doesn’t want to do.

By the 1960s Badsha is drawing, painting — one of his woodcuts, inspired by Brecht’s Threepenny Opera, wins an illustrious award from Arts South Africa (it is the first of several awards Badsha will win) — and, critically, he joins an underground student group. “We thought freedom was only a few years away,” he says. “All we had to do was arm ourselves, learn to survive and get ready for the revolution, because it was coming.”

But the revolution doesn’t come and Badsha doesn’t finish school because politics intervenes. In 1966 Badsha meets the artist Dumile Feni, who comes to stay in the house on Douglas Lane for several months while he works on an exhibition in Durban. Feni, who is sharing a tiny room with Badsha, wakes up at 4am to start drawing, scratching, scratching on his paper stuck up along the wall.

Before the end of the decade Feni goes into exile. Not long after most of the families living in the Casbah, including the Badshas, are evicted because of the Group Areas Act. By 1973 Badsha stops working as an artist and goes to work full-time in the Trade Union movement. He takes up photography — as a way of documenting the times in which he is living and as way of challenging and breaking the censorship and restrictions of apartheid. Badsha’s first book of photographs, Letter to Farzanah, is banned. He goes on to publish and edit several more seminal South African works. His photographs tour the world. His art is forgotten. Until now.

This year Badsha is sharing about 70 art works — produced by himself, and by his father, Ebrahim, between the 1950s and the late 1960s — in an exhibition titled Under the Umdoni Tree (a reference to his family home). It is not, as various academics and the artist himself point out, an archive or a retrospective. It’s a body of work, one that Badsha has gradually recovered, sifting through hundreds of drawings, woodcuts and monoprints that had been gathering dust for more than four decades. It is an exhibition of a time and a landscape that we forgot — or have yet to engage.

Although the exhibition largely focuses on Badsha’s prints, drawings and woodcuts — beautiful graphic renderings that stand on their own as artworks, but also provide a new sense of perspective on his later work as a photographer — the star of the show is Badsha’s father. Only a handful of Ebrahim Badsha’s artworks remain; most of the pieces were simply given away over the years. “We grew up with it and took it for granted,” Badsha says of his father’s art, during a walkabout of the exhibit. “What we were able to salvage is what you see here.”

Even Badsha finds his father’s work — beautiful paintings, tender pencil sketches — difficult to contextualise because he hasn’t “done much thinking about it” (many of the works were rediscovered only after Ebrahim’s death in 2003). Although Ebrahim worked as an artist for several decades, he was never exhibited during his own lifetime, his works never documented or catalogued. It is, as Thembinkosi Goniwe and Bheki Peterson point out during a panel discussion, a blind spot in our understanding of cultural history and practice in South Africa.

One of the lost works is a portrait of Chief Albert Luthuli, who sat for Ebrahim when he, Luthuli, was banned. “It was there on the wall when Dumile [Feni] was there,” Badsha says. Nobody knows what happened after.

Under the Umdoni Tree: The art of Ebrahim and Omar Badsha is on at the Substation, Wits University, (behind the Wits Theatre) until August 6. For more information visit the Centre for Indian Studies in Africa at www.cisa-wits.org.za