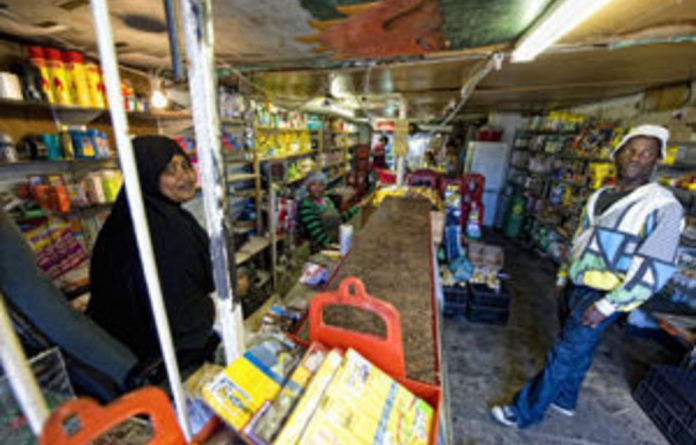 A recent study of township informal trade suggests that in the past few years an entrepreneurial revolution of sorts has revived the spaza shop, to the extent that the demise of the owner-managed township house shop, under the onslaught of the retail giants, Shoprite and Pick n Pay, suddenly looks less certain now.

Gone is the grimy counter that once separated the dour shop assistant from the customers lest they shoplift. Spaza shops have doubled in size and have become self-service superettes. The range of product s has increased, so consumers no longer have to travel 10km to buy goods such as gas, cosmetics, hardware or spices.

Spaza shops have become sensitive to local customer needs. For example, they now sell sugar by the spoonful instead of the usual 500g packet that becomes too expensive for many pension-dependent households towards the end of the month. And there are no more empty shelves.

Spaza shops stay stocked no matter what the time of week or month. Whereas they used to employ on average two people, they now employ three. Above all else, they have become cheaper. Poor families can now pay close-to-supermarket prices without having to fork out a R30 taxi fare.

How curious then that this progress is being widely perceived as an evil instead of being celebrated as a vast improvement to an essential community service. The reason? It is being driven by Somalis. Or perhaps not so curious. The hatred aroused by the arrival of an outsider who innovates and improves and thereby threatens entrenched interests is as old as trade itself.

Loren Landau, the director of the Forced Migration Study Programme in Johannesburg, says: “Attacks on [foreign] entrepreneurs, in all of our research, have almost always been triggered either by business cartels or business owners who want to get rid of the competition or by local leaders who want the goods in those shops to be distributed to their supporters.

“In the context in which people are generally already suspicious of outsiders, they are then easily mobilised against foreigners who become the scapegoat for job losses.” Although they are not the only force behind the xenophobia of recent years, spaza shopowners’ complicity in it is well documented.

One of the earliest community-wide outbreaks of xenophobic violence was a direct result of a coordinated call in 2006 from local shopowners in Masiphumelele, a small informal settlement near Noordhoek in Cape Town. Last year a retailers’ association in Khayelitsha sent letters to Somali traders demanding they close down or face the consequences.

But some observers think that the influence of local shopowners in the latest wave of xenophobia has waned. This time it has more to do with unemployed youth, angry about the perceived low-cost labour of Malawians and Zimbabweans, who include Somali traders in the broad sweep of their fury — they discriminate against foreigners, not between them.

Mansoor Mohamed, the director of economic development in the City of Cape Town, says the role of local shopowners in xenophobic violence has dwindled to one of “turning a blind eye” to thuggery by local youths.

According to Mzuvukile Nikelo, a community leader and a peace broker in Masiphumelele, the local shopowners’ role in the most recent wave of xenophobia could well have been decreased simply because locals have been all but driven out of the grocery trade by the Somalis, at least in Masiphumelele. They now mostly run shebeens, a trade eschewed by the Muslim Somalis, or rent out their shops to foreigners.

There is nothing inherent about the success of any ethnic group, says Landau. It is just that the Somali community in South Africa has a high proportion of entrepreneurial business people. Immigrants everywhere are by definition movers.

“The world over, migrants tend to be either harder working or greater risk takers. Being hard-working and risk-taking are two of the important characteristics of a good entrepreneur. Some of them put that to use in the regular labour market, working for someone else, and in many instances they put that to work starting their own businesses.

“I think what we are looking at [in South Africa] is that, given the nature of the economy in Africa — highly informal, driven by small businesses — people bring that kind of experience to South African cities where that kind of market is less sophisticated and less developed,” says Landau.

In response to one of the main recommendations of the researchers who studied the Khayelitsha spaza shops, Cape Town decided to train local spaza shopowners to become better shopkeepers. The attempt followed the same trajectory as almost every training programme aimed at improving the business practices of informal traders in the past two decades in South Africa — the government identifies the need to turn informal business people into formal ones, designs a training course on costing, pricing, bookkeeping and planning, pilots it once and then scraps it because of the embarrassingly low uptake and success rates.

“We went to the [Tertiary School in Business Administration in Pinelands, Cape Town] and they developed a micro-MBA course specifically for the local spaza owners. They marketed it but there wasn’t take-up,” says Mohamed. Mel Butterworth, a recently retired branch manager of the government’s Small Enterprise Development Agency, says that although there may be “nuggets” of potential among informal traders, the skills and entrepreneurial deficit is usually too big for government-subsidised training programmes to effect a large-scale, shift in business culture.

Landau points out that not all the factors that contribute to the success of Somali shopkeepers have to do with skills. “One of the success [factors] of Somali businesses is the level of trust among them, which allows them to buy together, to access informal systems of credit. South Africa [on the other hand] has fragmented and distrustful communities.”

Mandisi Njoli, a representative of a local retailers’ association in Khayelitsha affiliated to the National African Federated Chamber of Commerce (Nafcoc), angrily rejects the Khayelitsha research as patronising and insulting.

Local shopowners “are being called jealous, and they are being called unskilled [in the research]. And I’m asking myself now one question: for a person [who] has been running a shop for more than 30 years, put his kids through school with the money from that shop, all of a sudden he is [seen as] unskilled now — which means that somebody is patronising someone somewhere.”

But in the same breath he hails plans to improve the entrepreneurial skills of local retailers: “I am working on a project to pilot it in Khayelitsha where we are going to start with 120 general dealers and support them, but we are still trying to get enough funding for that.” Training will be part of it, but the support will include subsidising stock.

For Njoli, the success of the Somali traders has to do with a kind of shadowy, coordinated support “which is hiding, because it is highly political”. When questioned about it, he ascribes the support as coming from the Muslim community internationally and locally. What makes it unfair, he says, is that local shopowners have no similar support from the government.

On the contrary, the government’s answer to township development was “urban renewal” plans that opened up the townships for the retail giants, a huge blow to local spaza shopowners, says Njoli. Abdullaahi Hussein Mohamed, a shopowner in Masiphumelele who came to South Africa in 2004, rejects the stereotype of Somali shopowners as shrewd opportunity seekers. For them, as for local shopowners, life is difficult and trade is a matter of survival, he says He is appalled at the suggestion of abundant, secretive support for Somali shopkeepers.

“Even ourselves, the Somalians, we are not all the same. Some of the shops trade well, some of the shops don’t have customers. [The Somali presence in South Africa] is not just to have a business. We are here to get peace, to survive.”