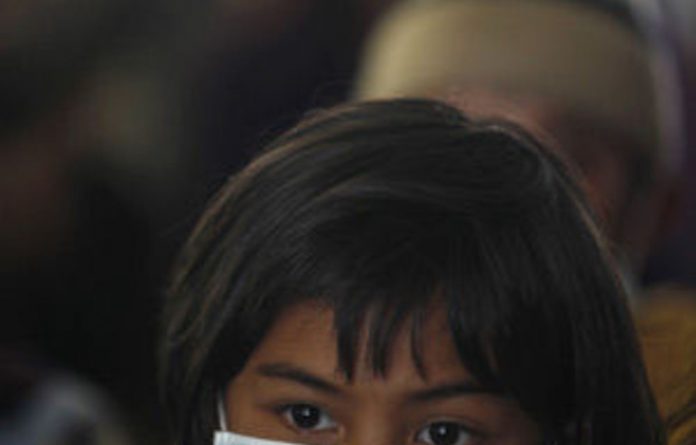 An Indonesian volcano, inactive for four centuries, erupted again on Monday, pitching ash 2km into the air and sending nearby residents scurrying from their homes.

Villages were emptying fast near Mount Sinabung on the north of Sumatra island, leaving behind only officials from the bureau of meteorology and the police. Short-haul flights skirting the volcano were delayed.

Reuters Television footage showed vast black clouds billowing into the sky, against a background of trees and farmhouses.

A Reuters TV producer said it began raining at around 4 p.m. and that clouds obscuring the 2 460-metre volcano’s peak made it difficult to tell if ash was still erupting in the afternoon.

“The air is very foggy and smoky,” he said. “There is no one around, only police and officials.”

About 21 000 people had been evacuated. Displaced residents, including children wearing masks, milled about in a makeshift reception centre with a roof but no walls.

Satebi Ginting, a vegetable farmer who fled her village to shelter in the nearby town of Brastagi, said she did not know when she would return home.

“I am still too scared to go back,” she said in a camp hosting around 400 people, where a band was playing traditional local tunes.

Indonesia is on the so-called Pacific Rim of Fire, an arc of volcanoes and geological fault lines triggering frequent earthquakes around the Pacific Basin. The eruption triggered the highest red volcano alert.

“Earlier today was another eruption at 6.30am, sending out smoke as high as two km, more or less,” he told Reuters.

A Reuters photographer said he saw plumes of smoke rising from the volcano after the second eruption. Inactive since 1 600, it had been rumbling for several days.

“I saw some hot pieces of volcanic rock come out and burn trees in the area,” he said. A smell of sulphur pervaded the air as residents moved out of their homes to temporary shelters.

Many residents fled to Medan, 50km Indonesia’s third-largest city, northeast of the volcano. Officials said much of the movement was unnecessary.

“People have been evacuated from areas within a 6km radius of the volcano,” vulcanologist Surono said. “Beyond 6km it is safe, but there has still been a lot of panic among people here who don’t understand that.”

He said it was impossible to know when the eruptions would stop, but it was unlikely volcanic dust would drift to neighbouring countries.

“Here, it is 3mm thick on the leaves of plants,” he said.

“It has the potential to damage people’s respiratory tracts, but in my lifetime of studying volcanoes I have never heard of anyone dying from inhaling volcanic ash.”

“However, there have been delays on the route between Medan and Sibolga,” a town south of the volcano, he told Reuters in a telephone text message. –Reuters