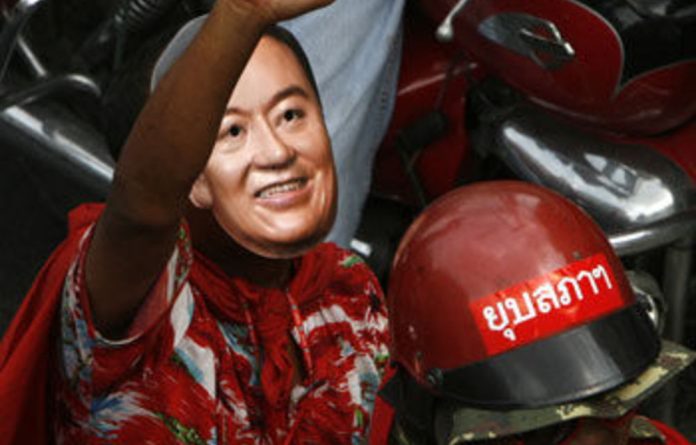 Emerging from weeks of silence, fugitive former Thai Prime Minister Thaksin Shinawatra has appeared in Africa, where he says he is dealing in diamonds and visiting Nobel Peace Prize laureate
Nelson Mandela.

A photo of his meeting with the former South African president was released in Thailand by Thaksin’s lawyer in an apparent move to quash rumors that the divisive ex-prime minister is ill — and to advertise that he’s rubbing shoulders with VIPs abroad.

“I travel all the time. Currently, I’m in Africa for diamond mining,” Thaksin told the Thai Rath newspaper in an interview published on Thursday. He did not specify if he was still in South Africa. He said rumors of his failing health were “lies”.

“It was not a meeting, it was a courtesy call,” spokesperson Sello Hatang said. He said he did not know what they discussed.

Thaksin was ousted in a military coup in 2006. He is widely accused of funding anti-government “Red Shirt” protests in April and May that occupied Bangkok’s main retail district, forcing the closure of major shopping malls and hotels. The protesters were seeking to unseat the current government and possibly bring Thaksin back to power. Sporadic violence and a crackdown by the military left 91 people dead and 1 400 wounded.

The tycoon-turned-politician remains popular among his rural poor power base but was convicted on conflict of interest charges in 2008 and fled the country. Thailand revoked his passports but Thaksin has acquired at least two new ones from Nicaragua and Montenegro.

He is believed to be living in Dubai. Thaksin has spent much of the past four years roaming the globe in search of business deals.

He visited South Africa previously to inspect diamond mines and has travelled to Liberia, Uganda and Swaziland for investments in diamonds and gold. He has posted photos of meetings with leaders on trips to Sri Lanka, Papua New Guinea and the Maldives.

Normally active on Twitter, Thaksin’s last posts came on July 25, the day before his 61st birthday, when he called for political reconciliation in Thailand. Since then he has kept a low profile.

In the interview with Thai Rath, he complained about a Supreme Court’s ruling in February that approved the seizure of $1,4-billion of his assets over his abuse of power while in office.

“More than half of my assets have been robbed from me, so I have to earn them back again to look after my kids,” he said of his three grown children.

In a list of Thailand’s wealthiest people published this week, Forbes magazine said Thaksin now is the country’s 23rd richest person with a net worth of $390-million. – Sapa-AP

Storm in a Thai red bowl