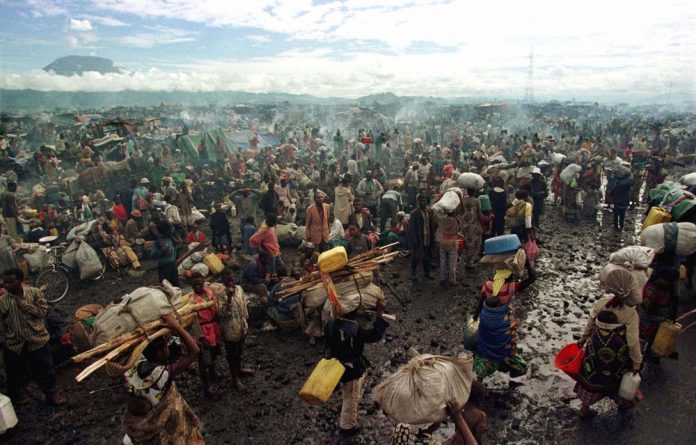 The United Nations has accused Rwanda of wholesale war crimes, including possibly genocide, during years of conflict in the Democratic Republic of Congo.

An unprecedented 600-page investigation by the UN high commissioner for human rights catalogues years of murder, rape and looting in a conflict in which hundreds of thousands were slaughtered.

A draft version of the report, revealed by the French daily newspaper, Le Monde, and expected to be published next month, says the abuses, over a period of seven years and two invasions by Rwanda, amount to “crimes against humanity, war crimes or even genocide” because the principal targets of the violence were Hutus, who were killed in their tens of thousands.

Among the accusations is that Rwandan forces and local allies rounded up hundreds of men, women and children at a time and butchered them with hoes and axes.

On other occasions Hutu refugees were bayoneted, burned alive or killed with hammer blows in large numbers.

It is the first time the UN has published such forthright allegations about Rwanda, a close ally of Britain and the United States.

The Rwandan government reacted angrily to the report this week, dismissing it as “amateurish” and “outrageous”, after reportedly threatening to pull out of international peacekeeping missions in an attempt to press the UN not to publish it.

Rwanda’s Tutsi leaders will be particularly uncomfortable with the accusation of genocide when they have long claimed the moral high ground for bringing to an end the 1994 genocide in their own country.

But the report was welcomed by human rights groups, which called for the prosecution of those ­responsible for war crimes.

The report covers two periods: Rwanda’s 1996 invasion of the ­country, then called Zaire, in pursuit of Hutu soldiers and others who fled there after carrying out the 1994 genocide of hundreds of thousands of Tutsis, and a second invasion two years later that broadened into a regional war involving eight countries.

Rwanda’s attack on Zaire in 1996 was initially aimed at clearing the vast UN refugee camps around Goma and Bukavu, which were being used as cover by Hutu armed forces to continue the war against the new Tutsi-led government in Kigali.

Hundreds of thousands of the more than one million Hutus in eastern Zaire were forced back to Rwanda. Many more, including men who carried out the genocide, but also large numbers of women and children, fled deeper into Zaire. They were pursued and attacked by the Rwandan army and the AFDL, a Zairean rebel group sponsored by Kigali.

The UN report describes “the systematic, methodical and premeditated nature of the attacks on the Hutus [which] took place in all areas where the refugees had been tracked down”.

“The extent of the crimes and the large number of victims, probably in the several tens of thousands, are demonstrated by the numerous incidents detailed in the report. The extensive use of non-firearms, particularly hammers, and the systematic massacres of survivors after camps were taken prove that the number of deaths cannot be put down to the margins of war.

“Among the victims were mostly children, women, old and ill people.”

The report goes on to say that “the systematic and widespread attacks have a number of damning elements, which, if proved before a competent court, could be described as crimes of genocide”.

The UN also says that while Kigali has permitted Hutus to return to Rwanda in large numbers, that does not “rule out the intention of destroying part of an ethnic group as such and thus committing a crime of genocide”.

The Zairean army collapsed in the face of the invasion and Rwanda seized the opportunity to march across the country and overthrow the long-standing dictator, Mobutu Sese Seko. Laurent Kabila was installed as president and he changed the name of the country to the Democratic Republic of Congo.

Rwanda invaded again in 1998 after accusing the new regime of continuing to support Hutu rebels. The following five years of war drew in armies from eight nations, as well as 21 rebel groups.

The UN report accuses Angolan forces of using the cover of the war to attack refugees from Angola’s conflict-plagued Cabinda province who had fled to the DRC. Angola is accused of “executing all those they suspected of colluding with their enemies”. Angolan soldiers also raped and looted, the UN investigation said.

International human rights groups welcomed the UN report and said it should be used to bring the accused to trial. “This is a very important report,” said Human Rights Watch. “We hope that it can form the basis for ending the impunity that has protected the people responsible.”

The UN’s damning conclusions will be embarrassing for Rwanda.

President Paul Kagame’s office attempted to dismiss the report. “It’s an amateurish NGO job and it’s outrageous,” said a spokesperson, Yolande Makolo. “Nobody reasonable believes that it’s helpful to anybody.”

Makolo did not comment on reports that Kagame warned the UN secretary general, Ban Ki-moon, last month that Rwanda would pull its troops out of peacekeeping missions in Darfur and elsewhere if the report was made public.

Rupert Colville, the spokesperson for the UN High Commissioner for Human Rights, said the leaked draft was not the final version and the report had undergone revisions.

But if there are substantial differences, the UN is likely to stand accused of bowing to pressure from Rwanda. —