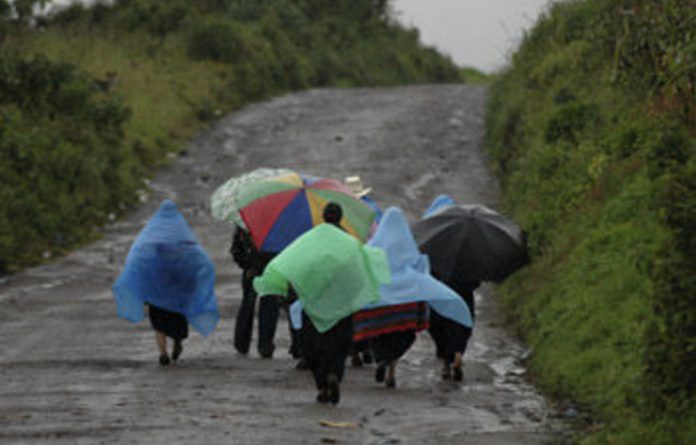 A massive landslide buried a crowd trying to dig out a bus from deep mud on Sunday, killing at least 22 people, with dozens more feared dead, as torrential rains battered Guatemala.

Emergency workers recovered 22 bodies from the landslide on a major highway in Cumbre de Alaska north-west of the capital, and they warned it could take two days to dig out all the victims.

“A wall of earth fell on a bus and around 100 local people organised themselves to dig out the victims,” said fire department spokesperson Sergio Vasquez. “Then another landslide came along and buried them.”

Rescue workers used shovels and pickaxes to dig bodies from the deep mud and local residents wrapped victims in blankets and carried them away.

Another landslide later on Sunday on a different highway slammed into a small bus, killing at least one person and injuring several others.

“It’s a national tragedy,” President Alvaro Colom told a news conference, adding that nearly 12 000 people had been evacuated to emergency shelters. “It’s painful that poor people are paying the price of natural disasters.”

Photographs of the bus that wrecked on Saturday in Cumbre de Alaska showed its roof crushed by a huge pile of earth and rock that almost completely covered the vehicle.

Colom appealed to people to stay off the nation’s highways due to the threat of further landslides and said rescue efforts would be suspended if more rain fell in the affected areas.

Record amounts of rain have fallen in parts of Guatemala and south-eastern Mexico this year. Thousands of people in the Mexican Gulf of Mexico state of Tabasco have been forced from their homes by flooding.

Water levels behind some dams in the region have risen so high that floodgates have been opened. – Reuters