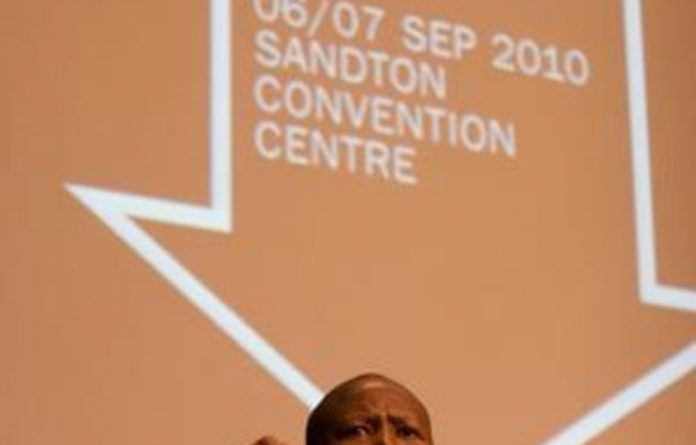 “We have been listening to leaders of the ANC who understand the ANC better than all of us who have been saying nationalisation is not the policy of the ANC,” Malema told the Mining for Change Summit in Sandton.

” … If you say it is not the policy of the ANC … you are simply denouncing the Freedom Charter … and you can’t be a disciplined member of the ANC who speaks against policy … discipline means you must respect the policies of the ANC including the decisions of the ANC,” he said.

“Everyone else junior and senior must respect the policies of the ANC. We want to nationalise because we want to make profit … to increase the budget of the state for social development purposes.”

Malema said the party adopted the Freedom Charter and nationalisation was part of the declaration, therefore, it formed part of ANC policy.

“This is what our leaders have fought for,” Malema said.

Senior ANC leaders — including treasurer general Mathews Phosa, secretary general Gwede Mantashe and president Jacob Zuma — have all said that nationalisation of the mines was not ANC policy.

Last year Phosa told investors in London that nationalising the mines was not ANC policy, nor was it government policy.

Policy formulation a ‘long process’
Mantashe said nationalisation of the mines was a debate and would have to be subjected to a rigorous process before becoming ANC policy.

Zuma made similar comments, saying policy formulation in the ANC was a “long process”.

Malema said the ANC has not succeeded in changing the lives of ordinary South Africans but has failed because the “apartheid structure” of the economy and of patterns of ownership remained unchanged.

“We are not going to do it that way [like Zimbabwe]. We are going to pass legislation.”

Malema said the state would make an offer to land owners which they would be compelled to take.

“You don’t give us an offer … you are too expensive,” he said.

He said large parts of South Africa, in the Western Cape in particular, were in foreign hands.

“This country belongs to the people who live in it, black and white … its important as we move forward that we redistribute this land to the people of South Africa.”

“If we don’t take a radical stance to intervene, rural women will never realise economic freedom in their lifetime.”

Black women in rural areas were also denied land — ownership of which plays a critical role in participating in the South African economy.

Earlier, ANC national executive committee member and former head of policy, Joel Netshitenzhe, said a strategic national plan for the mining sector needs to be developed before looking at nationalisation of mines.

“To pose that question now [nationalising] I think is to miss the point.”

Comprehensive mining strategy needed
“The level of state participation … will be informed by the effectiveness of the mining sector strategy arising out of a compact among all players,” said Netshitenzhe.

“What the country needs is a comprehensive mining strategy.”

Nationalisation of South African mines was expected to come under discussion at the ANC’s national general council (NGC) later this month. The ruling party’s youth league, resolved at its own NGC last month to push for it to become ANC policy.

The strategy was long overdue, and should have been formulated “by yesterday”.

Black economic empowerment should be “subsumed” to the objectives of the country’s mining strategy, he said.

“The big nationalisation has already happened and it was nationalisation of the resources … the state was made custodian of that resources on behalf of SA’s people. On the face of it this was a major step forward but in my view this important advancement was seriously compromised from the very start,” said Cronin.

Cronin said billions of rands in public money was spent on driving this “narrow BEE requirement”.

He argued that the “potential leverage” for the state in trying to meet its socioeconomic demands by using the country’s mineral resources was “squandered”.

The debate over the nationalisation of mines has been “eclectic” and the league’s position had changed over time, he said.

“There’s even been a degree of populism. There was a “scholastic debate” in the ANC about what the meaning of the Freedom Charter —
which Malema charges stipulates that the mines had to be nationalised.

“Some elements on the more centre side of the political spectrum mainly some black junior mining houses, some not so junior, have supported some form of nationalisation.

“In the midst of the global recession … some of the BEE but not just BEE but some of the mainstream mining houses were lobbying government and some of us as well to consider some kind of nationalisation as a bailout.

“In short the debate around nationalisation has been quite confused, often very acrimonious, I’m not sure how helpful [its been].”

Cronin said entering a discussion on how to leverage the country’s resources through a debate on nationalisation was “unhelpful”.

“Its far too narrow a doorway in which to enter into this important national discussion that we must have. Need to have serious discussion about how to leverage mining to benefit the SA people.”

Cronin and Malema have markedly different views on nationalisation and have clashed publicly about the issue in the past. – Sapa