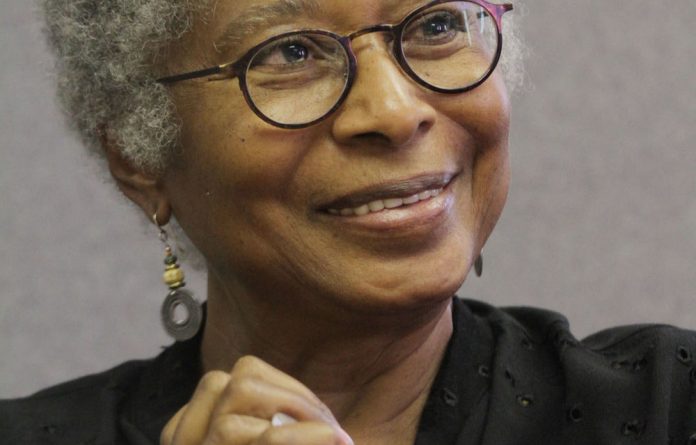 Along with millions of readers across the world, I have spent a significant amount of my reading life poring over Alice Walker’s words in the past two decades. Though I was to fall in love with many other black women writers in that time, In search of Our Mother’s Gardens was the first book by a black woman I ever read.

It changes you to see yourself reflected for the first time in what you read. This discovery of the self has been echoed by the thousands of university students I have taught over the years. In my literary syllabus, there were no plays, novels, short stories or poems written by black women; I encountered them in my honours year.

My own joy at discovering Walker and my unapologetic admiration for her courage were part of the baggage I held as I walked into the Steve Biko Foundation’s offices in Braamfontein, Johannesburg, for an interview.

Alice Walker is in South Africa to deliver the 11th Steve Biko Memorial Lecture at the University of Cape Town. She’s the second woman, after Mamphela Ramphele, to deliver the annual Biko lecture.

She is physically smaller than I had imagined and sported a short afro and a purple shawl around her hips.

In response to my question about what this first trip to South Africa meant for her, she said: “I’ve always wanted to visit South Africa and have been arrested [for a South African cause] before. In fact, it was my pleasure and honour to be arrested with Maya Angelou”.

Walker was active in anti-apartheid politics and “felt close to the struggle”. It was part of her lifelong activism against racist violence and any form of injustice. She also feels deep love for and comradeship with Winnie and Nelson Mandela.

About Winnie, Walker said: “I kept up with Winnie throughout. I was there in prison with her.” She speaks of having been with Winnie when she was banished to Brandfort (a town in the Free State). She felt connected to Winnie all this time and observes how “many of us in the US suffered with her”.

She is quick to draw a connection: “I grew up in [racist] Georgia and so have a deep understanding of what it takes to be a soldier.”

Later that Tuesday, speaking at An evening with Alice Walker at the State Theatre in Pretoria, she elaborated on this connection, declaring: “It’s unusual for me to speak at a place where one of my most important teachers is also admired: Fidel Castro.” The crowd roared and clapped.

When Walker mentioned Burmese opposition leader Aung San Suu Kyi, Venezuelan leader Hugo Chávez and Bolivian President Eva Morales, there was immediate recognition from the audience. Chávez and Morales were mentioned as part of a shift away from imperialist mineral and land-grab policies. Suu Kyi, affirms the importance of love for humanity in radical politics, as in the case of Steve Biko’s legacy.

Walker is no stranger to criticism. The mixed responses to her third and best-known novel, The Color Purple, for which she won the Pulitzer Prize for Fiction, partly illustrate this. In the US she was severely lambasted for shining a light on the misogyny that exists in black families. She was accused of judging black men unfairly and was later criticised for allowing a white director to be at the helm of the film adaptation of the same novel.

The novel she refers to most often to illustrate points in interviews, including this one, Possessing the Secret of Joy, was to earn her another round of criticism, this time from several African feminists. The group took exception to her criticism of female genital mutilation and her right to speak about it as an outsider.

I ask whether she minds the criticism that has come her way over the decades.

“I have a greater level of indifference. You start to understand that you’re like any other creation, so if I say things that people take offence to, that’s who I am. That’s what you get from me,” she says, posing the question: “Would you criticise a walnut tree?” I pause and laugh. “Really, what’s the point? That’s the place you get to.”

I realise she is making a larger point about letting go of the need for approval and external validation, which is so central to the way women are raised all over the world.

As we discuss how she determines which form an idea is to take, I refer to her statement about how characters in novels “do not leave her alone” until she writes them. I use the phrase “bug you”.

She disagrees with my word choice. “They do not really bug me. They are just present. It is only once I understand what has happened to them that I feel responsible for presenting them as they are. This is what happened with Possessing the Secret of Joy.”

I don’t know what I expected and I would have been thrilled by the opportunity just to meet her. But there she was, no entourage, no restrictions, no apologies for being on the planet in her own fashion.

I realise that the Walker I encounter on Tuesday morning is very much the Walker who speaks to an adoring audience and dances to the soulful melodies that come out of Simphiwe Dana and Sibongile Khumalo later that night at the State Theatre.

She is the Walker many of us encounter in her work, the Walker we return to time and again. It is her courage and her joyful embrace of life that makes it possible for her to change and save our lives so many times. It is this Walker that helps us believe that “we are the ones we have been waiting for”.

I ask her what she has learned from her best friends. “That life and this planet is wonderful, so even if I am weeping as I am writing, there is joy because I know where I came from. [I come] from sharecroppers and my mother never asked me to come and wash dishes if I was reading,” she says.

It is rewarding to walk through the world in contemplation and wonder. “It’s not for nothing that my name is Alice”, she quips.

Pumla Dineo Gqola is associate professor of literature at Wits and author of What is Slavery To Me?