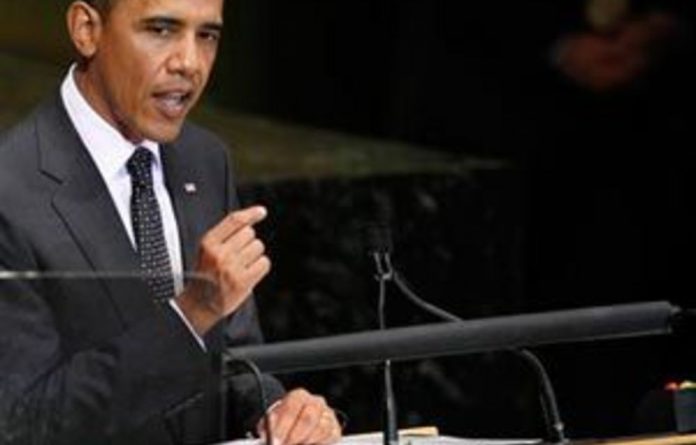 United States President Barack Obama called on Wednesday for new ways to tackle global poverty and said his administration would focus its help to the poor on promoting economic growth and fighting corruption.

Obama told a special United Nations summit that for too long progress in fighting poverty was measured by the sums spent to deliver food and medicine — a practice that had saved lives in the short term but not always helped poor countries develop.

“We need more than just aid to unleash that change,” Obama told the 192-nation General Assembly, advancing what he called a new US global development policy. “We need to harness all the tools at our disposal — from our diplomacy to our trade and investment policies.”

The three-day summit ended by adopting a declaration agreed earlier this month, which promised intensified efforts by the 192 UN member states to achieve the world body’s so-called Millennium Development Goals by 2015.

Obama’s 20-minute address emphasised points already made by leaders of several major Western economies, who have called for a results-based approach to aid instead of simply throwing money at development problems.

The new approach coincides with severe budget problems in many rich countries in the wake of the global financial crisis, but America’s first president of African heritage — his father was Kenyan — said overall US aid would not decline.

Saying America needed to be “big-hearted and hard-headed”, he said Washington would seek partnership with countries that emphasised policies that promote economic growth and accountability and tackled corruption.

“Let’s move beyond the old, narrow debate over how much money we’re spending and let’s instead focus on results — whether we’re actually making improvements in people’s lives,” said Obama, whose speech was greeted with lengthy applause.

The US would also reach out to countries making the transition to democracy, and from war to peace, he said, adding that he hoped that would include Sudan.

“The purpose of development — and what’s needed most right now — is creating the conditions where assistance is no longer needed,” said Obama. “So we will seek partners who want to build their own capacity to provide for their people.”

That meant not just handing out food to the needy but also helping countries develop their agricultural sectors, improve crop yields and help farmers get their products to market.

Helping women and children
International aid group Oxfam said Obama’s speech had clarified the US approach to fighting poverty. Several development experts had criticised the Obama administration for its lack of leadership on development issues.

British Deputy Prime Minister Nick Clegg said developing nations “must understand that they will not receive a blank cheque”, but acknowledged that Britain’s economic trouble “does not compare to the abject pain and destitution of others”.

Chinese Prime Minister Wen Jiabao said developed countries should carry out their promises. “The assistance should be selfless and have no strings attached,” he said.

The UN summit reviewed progress so far in meeting globally agreed targets to slash extreme poverty. Strong growth in China and India will help the world halve poverty and hunger but progress on other goals such as maternal and child health has been much slower.

Seeking to address that problem, UN chief Ban Ki-moon on Wednesday launched a $40-billion plan aimed at saving the lives of 16-million women and children over the next five years.

Current rates of maternal and child mortality were “simply unacceptable”, Ban told a meeting attended by China’s Wen, US Secretary of State Hillary Clinton and several African leaders. “The 21st century must be and will be different.”

In addition to saving lives, the strategy seeks to prevent 33-million unwanted pregnancies by 2015.

Scathing
A UN statement said the $40-billion had been pledged by governments, foundations, businesses and NGOs. The figure covers both domestic investment and aid to other countries.

UN officials said nearly $27-billion was new money from governments — indicating the rest had already been committed since plans for the campaign were first disclosed in April. Some $8,6-billion was pledged by low-income countries.

Ban told the summit’s closing session it was essential the Millennium Development Goal promises were kept. “The consequences of doing otherwise are profound — death, illness and despair,” he said.

Some advocacy groups were scathing about the summit. Joanna Kerr, head of ActionAid, called it an “expensive side-show that offered everything to everyone and nothing to no one.”

“An avalanche of warm sentiment cleverly concealed the fact that no fully funded plans of action for tackling poverty were actually announced,” Kerr said. — Reuters

Hungry for change: An open letter to African governments