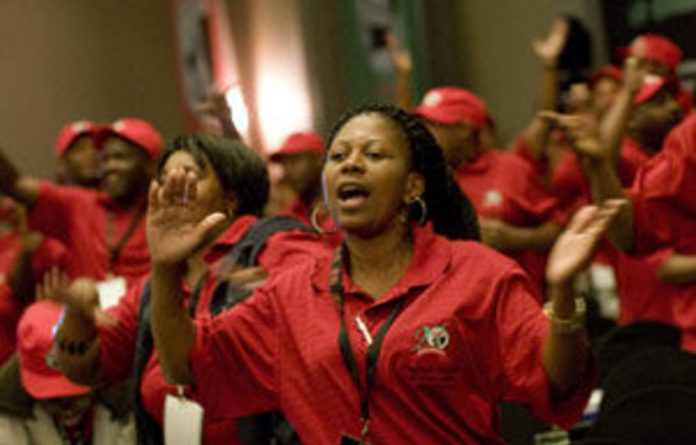 The congress of Cosatu’s teachers’ union, Sadtu, broke down in pandemonium on Thursday after delegates booed and heckled ANC secretary general Gwede Mantashe.

Mantashe was prevented from continuing his address after the conference hall in Boksburg erupted in fury over his comment that some children of striking teachers attended former Model C schools and continued learning during the strike, while others were denied education.

The hostile reception underscored the simmering anger of teachers and other public-service workers over the handling of the recent public-service strike and the widening rift between ordinary union members and their leaders over President Jacob Zuma and his government. Top Cosatu leaders are lobbying to retain Zuma as leader of the ANC and have gone to great lengths to polish his marble.

Zuma was abroad during the conference of Cosatu’s health affiliate, Nehawu, last week and failed to make a scheduled address at the Sadtu conference on Wednesday.

It was announced on Tuesday that Zuma would take leave the following day. It seems clear that he was trying to avoid being booed and heckled by Sadtu delegates.

Unable to vent their fury on Zuma, the delegates booed when Basic Education Minister Angie Motshekga’s name was mentioned from the stage on Tuesday. Ntola warned that members who repeated the insult during Motshekga’s planned address on Thursday would be disciplined. Despite the warning, some delegates booed the minister as she left the hall.

‘Just voting material’
Interviews with delegates underscored the disillusionment of the rank and file. Said Wandile Siwani, a Gauteng delegate: “The JZ administration treats teachers with contempt. There is total disregard for us. We are just voting material.” Siwani said Zuma had not addressed them because he feared similar treatment to that meted out to Motshekga.

“The political climate here is poisoned. But it’s ill-timed for him not to come because the 2011 elections are here. The president will need us.
“We rescued his political career from obscurity; now that he’s in power, we no longer matter. Why does he take leave when the workers need him the most? This is a total slap on the face.”

Deputy President Kgalema Motlanthe also appears to be persona non grata in union circles after his failed intervention in the strike while Zuma was on a state visit to China. Slated to address last week’s Nehawu congress, Motlanthe cancelled.

Apparently, he consulted labour through Cosatu general secretary Zwelinzima Vavi, with whom he struck a deal that the unions would accept the state’s 7% wage offer in place of the 8.5% public servants were demanding. Vavi failed to sell the deal and a government official told the M&G Motlanthe tried unsuccessfully for three days to contact him to obtain answers on why the unions had rejected the offer.

In what was widely seen as a reference to the deputy president, Vavi told Nehawu congress delegates that a senior Cabinet member had frustrated wage negotiations. But a government official who spoke anonymously to the M&G took a different tack. “Vavi didn’t answer Kgalema’s calls … talk about betrayal!”

Some sources claimed Vavi was seeking to prolong the strike so that Zuma could gain credit for resolving it on his return to South Africa.

Motlanthe’s spokesperson, Thabo Masebe, said it was untrue that the deputy president had interfered in the wage talks, but that he did not know whether Motlanthe had discussed pay negotiations with Vavi. “The negotiations were between the unions and the minister of public service and administration. It would be strange for the deputy president to advise on the offer,” Masebe said.

On why Motlanthe had not appeared at the Nehawu congress, Masebe said Nehawu had asked the ANC to send a representative and the deputy president’s name was submitted. But Motlanthe indicated to Mantashe that he could not make it because of other commitments.

Alliance politics and teachers’ wages and conditions may have dominated the Sadtu congress, but Vavi pointed out to delegates that only 24% of the 1998 grade one intake had managed to complete matric in the normal time.