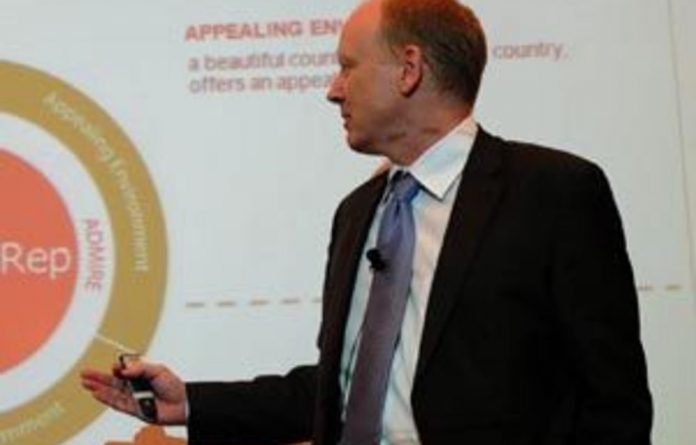 “If one draws an analogy with the suburb in which one lives, one could say that South Africa moved out of Johannesburg’s Berea, with its reputation for drugs and gunshots at night, into the genteel middle-class area of Norwood,” said Dominik Heil, the managing director of the Reputation Institute in South Africa.

However, locals were becoming increasingly cynical about their own country, with South Africans losing significant confidence in their government.

The Reputation Institute did a study of South Africa’s reputation among G8 countries (Canada, France, Germany, Italy, Japan, Russia, the United Kingdom and the United States) in January this year and followed it up with a post-World Cup survey in August.

“At the beginning of the year, South Africa was grouped at a level with several countries with serious reputational issues.

“Post-World Cup, the country’s rating had improved to be on par with Peru and Thailand.”

The research showed that South Africa’s score had improved by 4,51 points from January to August.

In January, South Africa was just above countries such as Israel, Venezuela, Ukraine, Russia, China, Colombia and Iran, in terms of its score.

But in August, the improved score put it in the same group as Mexico, Peru, Thailand, Taiwan and India.

“If you tell your parents you’re moving from Berea to Norwood they would be happy about that,” said Heil.

South Africa’s reputation was much better in Europe than in non-European countries, the survey showed.

Ineffective governance
“We need to figure out how we can become [better] known in the US and Canada,” said Heil.

South Africa’s best attribute was its physical beauty, followed by it being an “enjoyable” country to live in, in terms of culture, food, sport and entertainment.

Its worst attributes included ineffective governance, having few well-known brands and not being technologically advanced.

The survey did not ask questions about perceptions related to crime.

Although South Africa’s overseas reputation seems to have improved, locals did not rate their country highly.

The study showed that perceptions of the country by South Africans themselves dropped by more than 11 points in the same period, a decline Heil attributed partly to the national public-sector strike that occurred when the survey was being done.

“The public strike has really diminished us,” said Heil.

South Africans’ own score of their country dropped from 67,78 in January to 56 in August.

The worst attribute, according to South Africans, was bad governance. The category for “effective government” got the lowest score — 34,33.

“The confidence people have in their own country is taking a beating,” said Heil. — Sapa