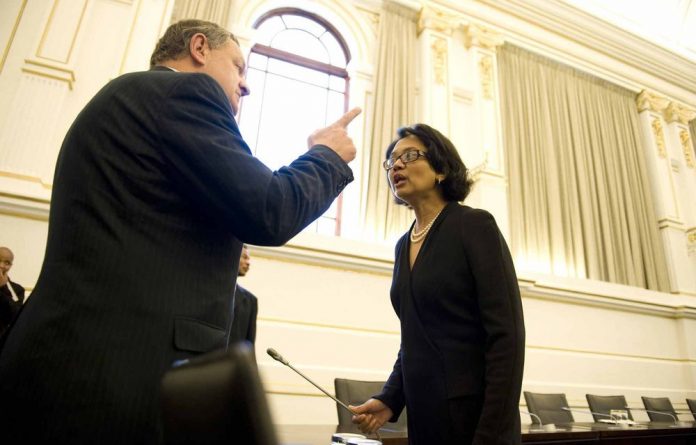 From the moment she started addressing AgriSA’s annual conference in Afrikaans she had delegates eating out her hand.

“Boer is no longer a swear word,” Tina Joemat-Pettersson, the Agriculture Minister, told the farmers, whose grins grew broader as she outlined her vision for farming.

“South Africa is your country. Your forebears are buried here and you are South Africans.”

“At last we’ve got a minister who speaks our language,” a delighted delegate said after the speech at last week’s indaba in Muldersdrift.

And Joemat-Pettersson’s charm offensive seems to be about more than just language symbolism and back-patting. Farmers say she is fighting hard to open new markets for them in non-traditional areas such as China and Africa.

But she is equally adamant about empowering black farmers and remains committed to transferring 30% of white-owned farmland to blacks in five years’ time.

The romance has had its rocky moments, most notably when AgriSA walked out of the Farmworkers’ Summit at the end of July after claiming that its views were being sidelined because of a political agenda.

But last week it seemed that the hatchet had been buried. In her speech Joemat-Pettersson said the government’s land-reform drive left little room for white farmers to grow locally and that was why she was looking at opening up new markets.

For a minister, she is extremely accessible. In an interview this week she said that agriculture is “not about emerging black farmers versus white commercial farmers”.

“The developmental agenda of the state is not only about the ANC’s constituency,” she said. “It is about the country and that includes commercial farmers. They’re very much part of South Africa’s economy.

“We are all the same coin, though there may be different sides to it. It’s not about calling heads or tails and tails lose. It’s senseless polishing the coin on the one side and neglecting the other.”

She acknowledged that in the past the mentorship programme has not been a success and smallholder farmers need more skills.

“We acknowledge that closing the agricultural colleges was a mistake. We are reopening them and we need commercial farmers’ input to make them work and reskill black farmers through training.”

She said her department is “vociferously” trying to bridge the gap between commercial farmers and black smallholder farmers. Black farmers are impatient, she said, and rightly so.

“But we are trying to fix now what should’ve been fixed a long time ago. And, yes, we do admit that the department still has a long way to go.”

She said communication with both farming sectors is critical. “If you explain the challenges that the department faces to them, they are more likely to understand.”

If South Africans are to be empowered all the country’s resources need to be managed well and that includes managing the expectations of its people, Joemat-Pettersson said. “This includes the expectations and fears of white commercial farmers.

“As one of our biggest challenges, it’s important to deal with land reform collectively.”

The growing love affair between the government and commercial farmers was highlighted when AgriSA rented a stall at the ANC’s national general council in Durban last month.

AgriSA president Johannes Möller said that he did not mind paying R25 000 for a stall that gave him access to the ANC’s leaders. “I accomplished more here than in my work over the whole year,” he was quoted saying.

The commercial farmers’ major beef remains the controversial green paper on land reform that proposes radical intervention by the government.

The green paper is meant to inform new land reform legislation currently being drafted by the Department of Rural Development and Land Reform.

Though the Agriculture Department is not directly involved in this, Joemat-Pettersson’s department will make a critical input into the Cabinet cluster because of the legislation’s implications for agriculture.

Farmers interviewed after the conference said they expect her to be a voice of reason.

In Durban Möller said he hopes that the delay in presenting the green paper shows that there are moves to tone it down.

The farmers’ unions hope that Joemat-Pettersson is among those pressing for moderation. The legislation is due to be presented to Cabinet in the next month.

Gritty reform options mooted
The department of rural development and land reform has repeatedly postponed the tabling of the land reform green paper, but the latest draft, leaked to the media this week, continues to propose the scrapping of the willing-buyer, willing-seller approach to land redistribution.

The paper insists that the cost of land reform is too high and that with its meagre budget, it cannot not afford the necessary land.

The Mail & Guardian‘s sources indicate that this may be the final draft and that the department is proposing three options to replace the willing-buyer, willing-seller principle.

One is more aggressive expropriation, while a second calls for the valuation of farms based on production rather than market value. The third option is a statutory discount for government on the farms it purchases.

The paper also proposes a land tax as a way of making more land available at lower prices. However, it warns that such a tax should be well formulated to minimise harm and be directed mainly at owners of large tracts of land.

It also suggests that foreigners should be prohibited from owning land in certain (unspecified) areas.

The paper warns that all interventions must pass constitutional muster, while admitting that there are differences between different ANC constituencies on the legislation.

Yolandi Groenewald
Yolandi Groenewald is a South African environmental reporter, particularly experienced in the investigative field. After 10 years at the Mail & Guardian, she signed on with City Press in 2011. Her investigative environmental features have been recognised with numerous national journalism awards. Her coverage revolves around climate change politics, land reform, polluting mines, and environmental health. The world’s journey to find a deal to address climate change has shaped her career to a great degree. Yolandi attended her first climate change conference in Montreal in 2005. In the last decade, she has been present at seven of the COP’s, including the all-important COP15 in Copenhagen in 2009. South Africa’s own addiction to coal in the midst of these talks has featured prominently in her reports.
Facebook
Twitter
WhatsApp
Linkedin
ReddIt
Email
Print